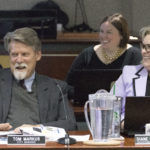 We are really nice but not that rich.

That is one takeaway I had from my final interview with Lawrence City Manager Tom Markus as he ended his tenure at City Hall last week. Markus noticed the Lawrence friendliness in the grocery store and other places where he was out and about around the community.

Markus, who has been in public administration since 1973 and most recently came to Lawrence after serving in the top spot at Iowa City, said he had less anonymity in Lawrence than he did in the other communities he’s served. People would come up to him often while out in public.

“It didn’t bother me, and part of the reason why it didn’t is because everybody is so damn friendly,” Markus said. “They’ll tell you what they think of you, but most people have been genuinely friendly. About the best thing you can say about any place is the people are darn nice people.”

But it also can have some drawbacks. Markus said one thing he had noticed in Lawrence was that the “can has been kicked down the road” on several issues. He listed controversial improvements on Queens Road, a lack of sidewalk maintenance and one of his frequent topics: agreements between the city and the county that he believes are outdated and often more of a “hand-shake” deal than a functioning agreement that serves both parties well.

“And I fear roads will be the next issue,” Markus said, expressing concern about whether the city has the right plan to keep up with road maintenance.

While listing the hot topics, Markus offered a theory on why some issues never seem to get resolved in Lawrence.

“Maybe it is the tale of two cities,” he said. “On the one hand, we are really friendly and open, but, on the other hand, maybe we are not as good at dealing with confrontation as we should be.”

Then he offered a thought that is pretty instructive in understanding a city manager who was not universally loved. Tough negotiation with the police union and ongoing talks with the firefighters union created some frayed relationships. Some public differences of opinion between the city and the county have occurred during his tenure, and, per usual, various constituencies have thought he was out to get them.

Everybody will come to their own conclusions on his little more than three-year tenure in Lawrence. For him, it has been guided by an important principle.

“You shouldn’t run away from friction,” Markus said. “That is what tells you there is something that needs to be worked on.”

One point of possible future friction? Someday the community may recognize it is not as well off as it thinks it is. That was the second part of my takeaway with Markus.

“I don’t think Lawrence, compared to many of the places I’ve been, has the financial wherewithal they think they do,” Markus said. “But like the other places I have been, they have the same appetite for all the things they want.”

When talking about financial wherewithal, Markus said he was talking about both city finances and the overall size and strength of the Lawrence economy.

“There probably needs to be better communication to the public about tax bases and revenue streams,” Markus said. “We spend a lot of our energy talking about how we want to spend money, but we don’t talk much about what are the resources.”

Except that one time when we did almost the opposite. Markus said a watershed moment for him was when voters approved a sales tax for affordable housing programs in 2017. The tax won convincingly despite the city doing little beforehand to prepare a formal plan or budget for how the money would be spent. Markus said it was a sign of how compassionate Lawrence was about the issue. Markus said not many cities in America would have approved such a tax under the circumstances.

“It is pretty impressive when somebody cares so much that they would support something without an absolute budget of how we are going to spend it,” Markus said. “That was a big deal. I took a lot of pride in being the manager during that time.”

Here’s a look at some other thoughts and comments from our interview:

On the University of Kansas: Markus said the community has to figure out even more ways to make the university give it the competitive advantage it has over other communities. He said KU already was a draw in many ways but could be even more so, if the city and university figure out how to cooperate more.

“Doug Girod (KU’s chancellor) and Reggie Robinson (the vice chancellor for public affairs) are two people I have a lot of confidence in, but they are confronting their own financial issues,” Markus said. “There is a lot going on up there.”

Markus said Lawrence probably could do more to generate tourism off of KU’s presence in the community, and he thinks the university can be particularly helpful on the economic development front. When I asked him why he thought the city was having trouble finding a tenant for Lawrence VenturePark nearly five years after the business park’s opening, he went back to the KU topic.

“I don’t think we have found our niche,” Markus said. “I think we struggle with it. I think that is where the relationship with the university has not evolved as far as it could. We should have more businesses spinning out of the university.”

On being market friendly: Markus didn’t once use the phrase “business friendly” in our interview, but rather he talked a lot about being “market competitive.” In one sense, that means evaluating the community’s position on things like tax abatements and other economic development incentives.

“We are a bit stubborn on any incentives,” Markus said. “And we do a lot of analytics to show the value and do a lot of reports to show the return on investments. If I didn’t have to use them, I wouldn’t, but it is part of the marketplace now.”

But being market competitive also means looking at the services the city offers, he said. Are those services being offered at rates at or below what the private market could offer? He said he doesn’t know whether any Lawrence public services are ripe for privatization, but he thinks it is a topic worth considering. He mentioned services like trash pickup, construction inspection and some utilities as examples of services that are private in some other communities.

He also said market competitiveness meant the city had to be willing to partner with others. He mentioned that Johnson County perhaps could be a partner on 911 service and jail issues, and said Lawrence and Douglas County might be providing services for the homeless that other communities may need.

“Where’s the homeless shelter in Johnson County?” he asked.

On national politics: Unsolicited, Markus offered two opinions on hot-button national issues that he said are important in Lawrence — immigration and climate change. He said he was worried that national immigration policy would continue to negatively impact KU enrollment.

“I know that is crossing a line politically in this state, but as a university community, it is critical,” he said.

On climate change, he said the city shouldn’t wait for others to act.

“How we respond to climate change is still looming,” he said. “Quite frankly, we need to do that because we are not going to get the leadership out of this state that should be expected and probably not out of the federal government for awhile. Cities probably will need to lead the way. I hope it will be fully studied, though, rather than just a reaction.”

On leaving Lawrence. Markus, who was 64 when he took the Lawrence job, has said he knew his tenure in Lawrence would be relatively short, but he did expect to stay a bit longer. That has led some to speculate that maybe Markus had to burn too much political capital too soon or faced some other political issues that caused him to leave. He said that wasn’t so. He said it really was about being closer to his family, especially three grandkids under the age of 3. He said he saw a lot of tight-knit families in Lawrence and realized he had not gotten to know some of his grandkids as well as he would like. He and his wife are moving to Milwaukee to be closer to family.

As for what he’ll leave behind in Lawrence, Markus went back to his guiding philosophy on friction. He hopes some of it has rubbed off.

“I hope I brought a degree of candor and maybe a willingness to confront friction and jump into the friction and say what I thought, even if I knew it wasn’t going to be very popular,” Markus said. “I tried not to run away from anything.”