Incoming city manager faced tough situations in Clayton, other roles in the region 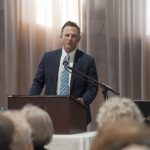 ST. LOUIS — As incoming city manager Craig Owens gave a driving tour of Clayton, Mo., he was sure also to drive outside Clayton’s bounds to a place starkly different from the city he has managed since 2008.

Just outside the affluence of Clayton, an invisible line is crossed and the landscape changes: the homes are still brick but they are much smaller, closer together, some in need of repair. Here, the school district is only provisionally accredited. And it is here, in a conjunction of two dozen small municipalities that fall under the Normandy Schools Collaborative, that Owens spent several years on the board of the nonprofit Beyond Housing, which deals with affordable housing and other community development issues in the area.

That Owens’ sights while Clayton’s city manager went beyond the city stood out to Beyond Housing President and CEO Chris Krehmeyer. He described Owens as a remarkably thoughtful leader who approached his work in a methodical way.

“I think to have the city manager of a place like Clayton — which in our region is the most affluent community — care about the work and the place where we operate is pretty amazing, because there is not a lot that he’s going to learn that is of great value for Clayton,” Krehmeyer said. “He cared enough about the region, he cared enough about folks that just lived literally 10 minutes away, that he’s willing to invest his time to understand, to learn, to participate.”

Clayton Mayor Michelle Harris, who was part of the Clayton Board of Aldermen that hired Owens in 2008, also described Clayton as a thoughtful and practical leader who doesn’t take his decisions lightly. Harris served on the board throughout Owens’ tenure and said that his thoughtfulness extended to some of the hardest situations he dealt with as city manager. One of those situations was a controversial incident last summer involving Clayton police and 10 incoming black students at Washington University who were accused of dining and dashing.

Responding to a late-night report from IHOP that four young black men had left the restaurant without paying, police stopped 10 black students a few blocks from the restaurant, some of whom were carrying IHOP bags, according to reporting from the St. Louis Post-Dispatch. Police questioned the students and some provided them with receipts for their meals while others said they had paid cash and didn’t have their receipts. The students walked back to the restaurant with patrol cars trailing them, where the IHOP manager said they were not the ones who had dined and dashed.

Following the incident, Washington University Chancellor Mark Wrighton said in a guest column in the Post-Dispatch that the stop had been “poorly executed” and that the students had been “scared, humiliated, intimidated and targeted because of their race.”

In the ensuing days, Owens and other Clayton leaders met with some of the students. In a guest column in the Post-Dispatch, Owens described the meeting as transformative and emotionally powerful. He apologized on behalf of the city, writing: “In hindsight, it is clear to us that we mishandled the interaction with these 10 Washington University students and lacked sensitivity about their everyday reality because of how racial bias affects their lives.”

Harris said she thought the Clayton police officers did what their procedures dictated. She said nobody involved came out of the situation truly happy, but she thought Owens had to really face down the situation and did the best he could trying to balance everyone’s concerns.

“In a day, he handled a lot of different questions and accusations and things like that,” Harris said. “And I think he did a good job, but beyond that, the main point about Craig is he really agonized over it. He really worried about it and he really cares about each and every police officer and each and every student that might have been affected.”

When asked about his takeaway from the incident, Owens said a lot more progress needs to be made and that communities need to continue to have important and difficult conversations about race and equity. He said the legacy of Ferguson is front and center in the St. Louis region, but that it is a national issue that also extends beyond the region and beyond policing.

“This is a national conversation and every community needs to continue to be very dedicated in continuing conversations about race (and) equity in everything we do, in making sure that each community is processing it,” Owens said. “There are big, tragic events that can occur, but even smaller events can reveal some disconnect.”

Following the incident, the city contracted with 21st Century Policing Solutions LLC, a consulting group that includes members of former President Barack Obama’s Task Force on 21st Century Policing. Owens said that a report with policy and other recommendations would be complete soon.

Like Harris, former Clayton Mayor Harold Sanger, who served as mayor from 2013 to 2019, said the incident with the Washington University students was one of the more controversial during Owens’ time in Clayton. Sanger and Harris also both noted that the large-scale development in Clayton’s downtown in recent years has also been contentious, with some residents opposing certain projects. Both also said they were sorry to see Owens go.

Sanger, whose term ended in April, said that if the board were to ask God for a city manager, that Owens would be “pretty close to what would come out of the clay.” Sanger described Owens as someone who would not cross the street without a walk signal. He said that Owens’ approach as a leader was driven by data and policy, and that he used his understanding of the community to help the board better understand the unintended consequences of its decisions.

“He was like the eighth person on the board; I would call him 7b,” Sanger said. “Because he had a handle on the city, the people and he knew each of us individually.”

Harris also described Owens as a practical leader with high standards who gathers a lot of information ahead of decisions, and tries hard to incorporate all aspects and impacts. Harris is the only remaining member of the board that hired Owens, and she said it was “absolutely” a good choice.

In reflecting on the hire, Harris showed a photograph of Owens when he initially joined Clayton staff, where he appears much younger than today. She admitted she used to call him their “boy scout,” and agreed with Harris’ characterization about him being policy-driven. She said that although he had the credentials to do the job when hired, she’s seen him mature and learn through the challenges he’s faced over the last 11 years in Clayton.

“I think he’s matured a lot in this role here,” Harris said. “He’s faced a lot of these tough situations.”

That includes his role at Beyond Housing. In recent years, Krehmeyer said Beyond Housing has invested millions of dollars building and rehabilitating homes in the Normandy district and helped bring a grocery store, movie theater and health care facility to the area. Beyond Housing also has staff working in the schools themselves. Regarding Owens’ transition to Lawrence, Krehmeyer said he thinks Owens understands that addressing challenges faced by cities less affluent than Clayton isn’t simple, but there are ways.

“He’s seen it firsthand through Beyond Housing, that you can build grocery stores in food deserts, you can bring movie theaters to places that haven’t had anything like that in decades,” Krehmeyer said. “You can achieve some things, you just have to find the right partners and cobble together the right resources and have folks in the region care enough to get behind it.”

Owens, originally from Overland Park, will be moving to Lawrence this summer with his wife, Elizabeth, and their three children: 14-year-old twin boys and a 2-year-old boy. Apart from the professional challenge, Owens said what attracted him to Lawrence was its vibrancy. He said not only does he want that environment for his own life, but that it’s the kind of place that he and his wife want to expose their kids to.

“It’s got all this diversity and difference and vibrancy,” Owens said. “And I know that’s also what makes it more challenging for a city manager, but it’s rich with experiences.”