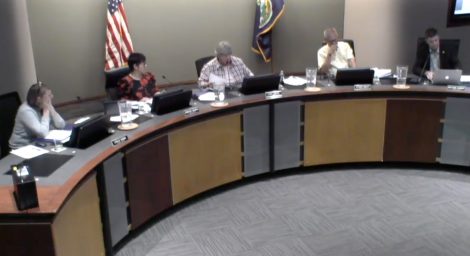 The Lawrence City Commission has unanimously chosen to adopt the firefighters union’s proposal for an employee contract instead of the plan proposed by the city.

The union’s proposed contract maintains longevity pay for all firefighters, removes a cap on sick pay, and maintains the level of workers’ compensation in the current contract. Both proposals included 2.5%-5% merit increases, a 5% increase to starting pay, and a 1% general wage increase, but the union’s proposal also calls for an additional 2.5% or 5% increase for employees who are not already at the top of the pay scale.

The city’s proposal would have capped the longevity payments at $1,000 and eliminated longevity pay for new employees or, in the case of the fire department, those hired after Jan. 1, 2020. The union proposed that the amount should be capped at $1,776 and that all future employees should be eligible to receive longevity pay.

Human Resources Manager Lori Carnahan told the commission at its special meeting Thursday that the additional pay increase would cost approximately $155,000. Carnahan said that the union’s plan for longevity pay would also add to the city’s costs but did not have that exact figure Thursday evening. She said to remove the cap on the accrual of sick pay would require a discussion about how much fund balance the city needs to maintain.

Union representatives argued that their proposal regarding sick pay and workers’ compensation was in line with the fire departments of comparable cities, and that those elements of the contract were important in order to keep the department competitive.

Commissioner Matthew Herbert and Vice Mayor Jennifer Ananda agreed that those elements were important for the retention and recruitment of employees. Mayor Lisa Larsen, who is also a mediator, said she could not support the city’s proposal because it included a mediating procedure for grievances that was not in line with mediating guidelines.

Representatives of the city and the union, the International Association of Firefighters Local 1596, began meeting with a mediator from the United States Federal Mediation and Conciliation Service on Aug. 1, but continued to be at odds over pay increases, longevity pay, sick pay and workers’ compensation, among other elements of the contract. In line with negotiating guidelines, the city and the union submitted their final proposals to the commission, which held a public hearing Thursday to decide which proposal to accept.

The employment contract covers wages, benefits and working conditions for firefighters, fire engineers and fire lieutenants in the Lawrence-Douglas County Fire Medical department. Generally, the city’s proposal would have brought the firefighters’ longevity pay, sick pay and workers’ compensation policies more in line with policies for other city employees and the police union.

The commission had to accept either proposal in its entirety, according to the city’s resolutions governing union negotiations. The resolution states that the commission must select the proposal that it determines is more fair and equitable on the basis of three main factors: evidence supplied in support of the proposals; the financial situation of the city; and comparison with similar comparable municipal employers in the area labor market.

• July 11 — After talks break down, city and firefighters union cancel planned meetings until mediator takes over