City and firefighter union prepare for ‘lively debate’ on pay, staffing as part of contract negotiations 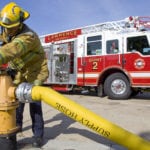 Discussions between city and firefighter union representatives will include wage increases, overtime pay and longevity bonuses, and both sides are preparing for a “lively debate.”

The current contract covers firefighters, fire engineers and fire lieutenants in the Lawrence-Douglas County Fire Medical Department, and it expires at the end of this year. Representatives for the city and the association of Lawrence Professional Firefighters, Local 1596, agreed to open contract negotiations, and the first meeting was held Monday at City Hall.

In going through the city’s proposed changes to the contract, City Manager Tom Markus said on several occasions that he expected a robust conversation about certain proposals. Markus noted that if city and union representative cannot come to an agreement on certain sections, each side’s final proposals will go to the City Commission for ultimate consideration. However, he said he hoped resolution could be reached.

The union proposed six changes to the contract. Union President Dean Garrison said that he saw the negotiations as essentially updates to the contract that shouldn’t be contentious or have sticker shock. In addition to a general wage increase to the existing stepped pay plan, the union proposed increases to staffing minimums, sick leave, funeral benefits and shoe/clothing allowances.

“We’ve taken careful consideration in our list,” Garrison said. “It may seem short, but we did that deliberately to ensure that it’s fair and balanced and contains items that can be negotiated within the time frame.”

Under the current pay structure, pay for firefighters, fire engineers and fire lieutenants is organized into a pay plan with 24 steps, and employees are eligible for annual increases based on merit and any general wage adjustment determined by contract negotiations. Under the current contract, employees receive an annual performance evaluation and are eligible for up to two step increases — amounting to either a 5% or 2.5% pay increase, depending on where they are in the plan. The union doesn’t want to change anything about the current pay structure but proposes establishing an annual general wage adjustment to all pay levels based on the consumer price index.

The city’s compensation proposal does not yet provide all the specifics about compensation but states that the city would like to discuss various sections of the contract that deal with compensation “in their entirety,” according to the city’s proposal. Those include the sections that lay out the pay plan structure, general wage adjustment and additional pay increases that are currently provided for certain skills and duties.

The city also proposes that overtime and longevity bonuses for firefighters follow citywide policies, both changes that would amount to decreases in those payments for some fire department employees. For instance, the city calculates overtime per pay period, but the contract includes exceptions to that policy. Under the city’s proposal, longevity pay would be capped at $1,000 annually, and the city is proposing that the bonuses be eliminated for fire and medical employees hired after Jan. 1, 2020. Last year, the city eliminated longevity bonuses for city employees hired after Jan. 1, 2019.

Markus laid out three priorities for the city’s proposals: internal equity among regular city employees and those covered by negotiated contracts; reestablishing management rights that have been limited over the years through contract negotiation; and ensuring the pay is market competitive. Regarding pay, Markus said one issue he’d also like to address is compression of pay levels in the pay plan.

“I think we may have issues with employees not wishing to ascend to a higher rank because financially it isn’t worthwhile to do so, and that’s what compression typically does,” Markus said.

After reviewing the city’s proposal, union representatives said the city’s changes are significant and that they also expected lively debates as negotiations continue. Union Vice President Seamus Albritton said the city proposed significant changes to large portions of the contract, which they feel has served the department well.

“We just wanted to publicly say that we believe the contract that we have has done a lot to create the career department, the professional department that we have right now,” Albritton said. “A lot of our perspectives are very different, and we look forward to having some lively debates.”

The next contract negotiations meeting between the city and the firefighters union is scheduled from 9:30 to 11:30 a.m. May 6 at City Hall, 6 E. Sixth St.