After talks break down, city and firefighters union cancel planned meetings until mediator takes over 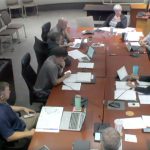 Negotiations between the City of Lawrence and the local firefighters union have come to a halt until a mediator takes over the proceedings next week.

A local resolution governing contract negotiations states that the negotiations are automatically considered at an impasse if they aren’t concluded by July 1.

By the time the groups reached the impasse date, they were still far apart on agreeing to a new employment contract covering wages, benefits and working conditions for firefighters, fire engineers and fire lieutenants with Lawrence-Douglas County Fire Medical. The current contract expires at the end of this year.

Although the impasse date was reached, the two sides had planned to continue negotiations in meetings on Wednesday, July 15 and July 17. The meetings would have allowed the two sides to negotiate until the mediator arrived in Lawrence on July 19.

In a news release this week Dean Garrison, president of the union, criticized the city for the cancellation of the July 15 and July 17 meetings.

“Lawrence Professional Fire Fighters IAFF Local 1596 are disappointed in the City’s decision to stop further discussion, and deem the decision inappropriate,” he said.

Garrison also noted that the city chose to retain former City Manager Tom Markus, who retired in June, as a member of the city’s negotiating team.

Casey Toomay, assistant city manager, confirmed that Markus has continued to serve on the negotiating team as a staff member for the city and would do so until the negotiations were completed, including the portion led by a mediator. Craig Owens recently took over as the city manager.

Toomay did not immediately respond to the Journal-World’s request for information regarding Markus’ compensation for serving on the negotiation team.

The negotiations stopped because of a breakdown in discussions on Wednesday about how to continue using previously established ground rules. The two sides could not agree on changing rule No. 6 in the ground rules, which prohibits either side from speaking to the media without notifying the other side in advance.

The rule, which was agreed to in April, specifically states that it would be in effect until an impasse was reached, which occurred on July 1. Seamus Albritton, vice president of the union, told the Journal-World the city asked on Wednesday to amend the rule to allow it to continue until the negotiations are completed, but the union was not willing to change the rule.

“We’re at an impasse, so that rule no longer applies,” he said. “In our eyes, these rules keep consistency throughout the process. Trying to change them midprocess is bad-faith negotiating.”

Toomay said the city asked to change the rule to allow the negotiations to continue operating as they were prior to the July 1 impasse date.

“The (union) was not interested in continuing to meet unless they had the ability to continue to unilaterally comment to the press,” she said.

When the two groups could not agree, the city notified the union that it would end negotiations until the mediator could take over the process and help the two sides find an agreement, Albritton said.

Although the firefighters criticized the city for the two canceled meetings, Toomay said that they were scheduled during the same week that the mediator was to take over. She also contradicted Albritton and Garrison’s claim that the city chose to cancel the meetings.

“The resolution doesn’t preclude continued discussions after impasse, but it doesn’t require us to meet (either),” she said, referring to the city ordinance regarding negotiation processes. “If we weren’t able to agree on the ground rules, the city proposed canceling those meetings and the (union) agreed to cancel them.”