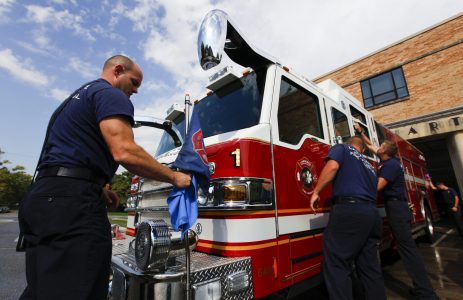 After mediated negotiations failed to resolve disagreements between the city and the firefighters union regarding a new employment contract, the Lawrence City Commission will now have the final say.

Representatives of the city and the union, the International Association of Firefighters Local 1596, began meeting with a mediator from the United States Federal Mediation and Conciliation Service on Aug. 1, but continue to be at odds over pay increases, longevity pay, sick pay and workers’ compensation, among other elements of the contract. In line with negotiating guidelines, the city and the union have submitted their final proposals to the commission, which will hold a public hearing Thursday to decide which proposal to accept.

Generally, the city’s proposal would bring the firefighters’ longevity pay, sick pay and workers’ compensation policies more in line with policies for other city employees and the police union. Human Resources Manager Lori Carnahan said that the city thought its proposal prioritized equity between the union and other employees and provided competitive pay and benefits for firefighters.

“We believe we have put forth a proposal that is balanced and recognizes the desire for everyone to have a safe working environment,” Carnahan said.

But the union sees it differently. IAFF Secretary Jason Williams said that to achieve true internal equity all city employee groups would be able to negotiate a contract. In addition, Williams said that the city’s proposal would change longstanding policies regarding longevity, sick time and workers’ compensation, and the union was asking that current policies be maintained.

“Overall, we would like to keep the contract intact as is, because we believe it’s been working,” Williams said.

The employment contract covers wages, benefits and working conditions for firefighters, fire engineers and fire lieutenants in the Lawrence-Douglas County Fire Medical department, and it expires at the end of this year.

The commission has to accept either proposal in its entirety. An overview of some of the differences in the two proposals is as follows, and the full proposals are available on the city’s website. As of Wednesday afternoon, the city did not have the monetary value of each proposal.

Sick pay: The city is proposing to maintain the current maximum accrual of sick pay, which is capped at six months of pay. The union is proposing that the cap be removed, which it says is a common practice in comparable cities.

Correction: A previous version of this article misstated the workers’ compensation period proposed by the union.