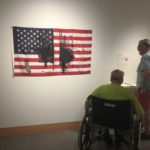 Visitors to the Spencer Museum of Art view "Untitled (Flag 2)" by Josephine Meckseper, Friday, July 13, 2018, in the museum's Jack & Lavon Brosseau Center for Learning. The artwork, which was inspired by the American flag, came to the University of Kansas as part of a nationwide public art project and was removed Wednesday by university officials from its outdoor display after outcry from Kansas Gov. Jeff Colyer and other political figures.

The Spencer Museum of Art and The Commons have released a joint statement on the controversy surrounding “Untitled (Flag 2),” the American flag-inspired artwork they brought to the University of Kansas as part of a nationwide public art project.

Their joint statement marks the first time the organizations have spoken publicly about the calls for the artwork’s removal from its outdoor display on the KU campus earlier this week, when several high-profile Kansas conservatives, including Gov. Jeff Colyer, led a successful push to see it taken down.

Despite the piece’s removal and relocation to the Spencer Museum, both The Commons’ and the museum’s leaders say they “remain committed to engaged and inclusive dialogue with our communities.”

“We respect and welcome continued discussion of the artwork ‘Untitled (Flag 2)’ by Josephine Meckseper, now on display at the Spencer Museum of Art,” the statement read. “Exhibition of the artwork, part of the Pledges of Allegiance project hosted by the Spencer Museum of Art and The Commons, will continue to fulfill our commitment to supporting art, ideas, and dialogue.”

Over a 15-minute period Friday afternoon at the Spencer Museum, a Journal-World reporter observed a steady stream of visitors viewing the piece, which is now in the museum’s Jack & Lavon Brosseau Center for Learning. 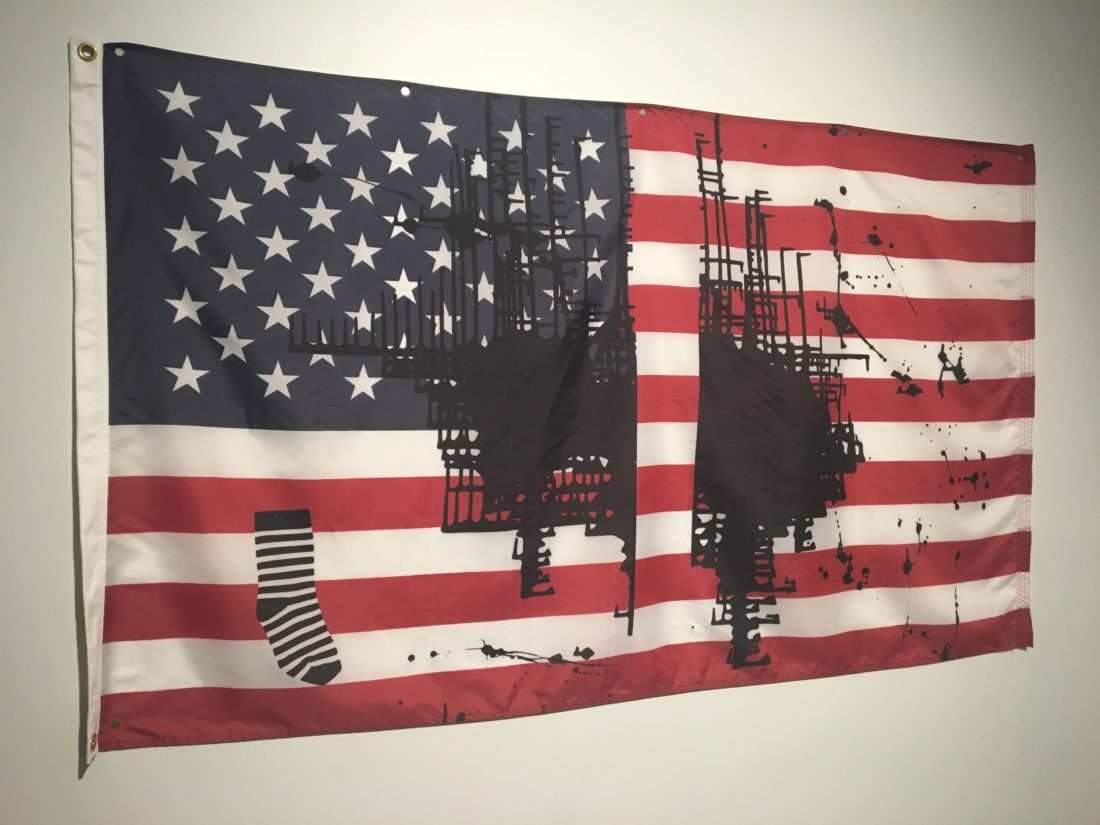 “Untitled (Flag 2)” by Josephine Meckseper is displayed Friday, July 13, 2018, in Spencer Museum of Art’s Jack & Lavon Brosseau Center for Learning. The artwork, which was inspired by the American flag, came to the University of Kansas as part of a nationwide public art project and was removed by university officials from its outdoor display after outcry from Kansas Gov. Jeff Colyer and other political figures.

The statement also said The Commons and the Spencer Museum “support freedom of expression in academia and the contributions it brings to our society,” also offering some background on the nationwide “Pledges of Allegiance” project.

Eleven of the 16 works created for the project have been displayed in front of The Commons since last fall, “on a new flag pole that was erected specifically for the exhibit,” the statement read. Many who have expressed outrage at the art have said it should not have been displayed in place of a real American flag, seemingly operating under the assumption that official flags are normally flown at that location.

“The final work in the Pledges of Allegiance series is Meckseper’s abstract representation of the United States divided into two parts and a printed graphic of the American flag,” the statement said. “Citing the diverse histories and perspectives of people in this nation, Meckseper uses the work to call attention to the nation’s divisions at a time when unity is needed.”

The statement also said the Spencer Museum, The Commons, the KU Natural History Museum and the Hall Center for the Humanities would work with KU’s Office of the Provost and other partners across campus to offer programs in the coming weeks and months “that explore the issues and responses raised by the artworks.”