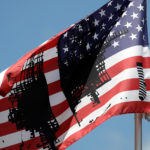 An art piece called Untitled (Flag 2), flies on the University of Kansas campus in Lawrence, Kan., Wednesday, July 11, 2018. It is part of a series of flag pieces that have flown on the Lawrence campus in the last several months as part of a national art project. (AP Photo/Orlin Wagner)

The president of the Kansas Board of Regents said he was glad to see a controversial art piece removed from the University of Kansas campus Wednesday after calls from the governor and others demanded its removal.

Regents spokesman Matt Keith released a statement on behalf of Blake Flanders, the governing body’s president and CEO, Wednesday evening expressing his gratitude at KU’s decision to remove the artwork, which is now being housed in KU’s Spencer Museum of Art.

“I’m thankful that Chancellor (Douglas) Girod decided to move the flag that was exhibited at the Commons at the University of Kansas,” Flanders said in his statement. “I would like to thank all those who expressed their concerns to the Board of Regents about this issue, including Governor Colyer, members of the Legislature and many Kansans. Input from the public is important to the Board’s mission.”

The controversy began Tuesday when Steve Watkins, a combat veteran and Republican candidate for Kansas’ 2nd Congressional District, issued a statement condemning the artwork as a “defaced” American flag that he found disrespectful to military members. The piece, which looks like an American flag but with some added imagery, was created by German-born artist Josephine Meckseper as part of a nationwide public art project dubbed “Pledges of Allegiance.”

New York City-based nonprofit Creative Time commissioned the piece, “Untitled (Flag 2),” along with 15 others, with the intent of inspiring “a sense of community among cultural institutions” amid a divisive political climate. The artists were also asked to create pieces that could speak to “how the country might move forward collectively.”

But on Wednesday, just six days after the flag’s installation on the KU campus, a different conversation was occurring.

Girod’s statement Wednesday did not elaborate on these safety concerns, only asserting that, “while we want to foster difficult dialogue, we cannot allow that dialogue to put our people or property in harm’s way.”

KU police took a report of at least one threat Wednesday at the Spencer Museum of Art, according to the department’s online crime report log.

The KU Office of Public Safety did not immediately return a call Thursday morning seeking more information about the incident, or whether additional related crimes were reported.

The KU police department’s crime reports are not typically posted online until two days after incidents occur, occasionally longer for investigations that are ongoing.

Girod also said KU was in the process of relocating the flag to the nearby Spencer Museum of Art, “where we can continue the important conversation it has generated.” As of Thursday morning, the flag was hanging in the museum’s study center. 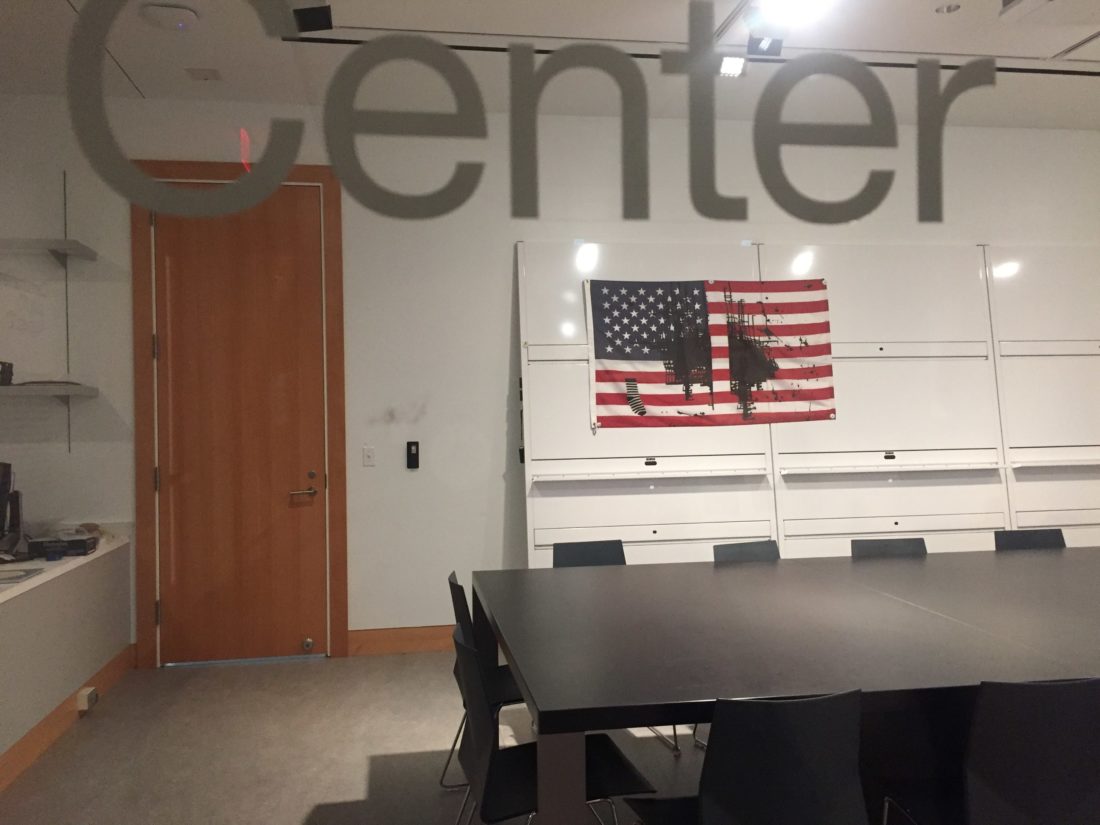 The flag art that was removed from in front of Spooner Hall on the University of Kansas campus Wednesday is seen in the Stephen H. Goddard Study Center at KU’s Spencer Museum of Art, Thursday, July 12, 2018.

The Journal-World was unable to reach Meckseper herself Wednesday evening, but did receive a response from Creative Time, the nonprofit leading the nationwide “Pledges of Allegiance” project.

“Art has a responsibility to drive hard conversations. Pledges of Allegiance was begun to generate dialogue and bring attention to the pressing issues of the day,” the statement read. “The right to freedom of speech is one of our nation’s most dearly held values. It is also under attack.

“We are proud to stand by artists who express themselves,” Creative Time said. “Today’s events illustrate the same divisions in our country that the series has confronted head-on.”

In an artist’s statement on the Creative Time website, Meckseper described her work as a collage of the American flag “and one of my dripped paintings which resembles the contours of the United States.”

“I divided the shape of the country in two for the flag design to reflect a deeply polarized country in which a president has openly bragged about harassing women and is withdrawing from the Kyoto protocol and UN Human Rights Council,” her statement read.

The black and white sock in the bottom left-hand corner of the piece “takes on a new symbolic meaning in light of the recent imprisonment of immigrant children at the border,” Meckseper said, continuing, “Let’s not forget that we all came from somewhere and are only recent occupants of this country — native cultures knew to took care of this continent much better for thousands of years before us. It’s about time for our differences to unite us rather than divide us.”

Meckseper’s piece is the last of 16 flags created for the “Pledges of Allegiance” project, which launched at KU in November and will run until July 30. The university is one of 11 institutions at 14 locations across the country participating in “Pledges of Allegiance,” brought to KU by the Spencer Museum of Art and The Commons.

Later Wednesday, in response to the KU controversy, Colyer ordered 19 additional American flags to be flown outside the Statehouse in Topeka.

Check back as this story develops.