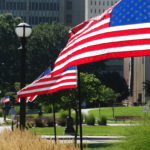 Kansas Gov. Jeff Colyer ordered the installation of new flags along the north side of the Statehouse Grounds on Wednesday, July 11, 2018, in response to a controversial art installation at the University of Kansas involving an altered American flag with black paint symbolizing a politically divided nation.

Colyer spokesman Kendall Marr said the Republican governor ordered the 19 additional flags to go up Wednesday afternoon on the north and south sides of the Statehouse grounds. The state also displays extra flags on holidays such as Flag Day.

Marr said the governor wanted to show support for the flag and its proper display.

A national art project called “Pledges of Allegiance” at the University of Kansas featured the flying of an altered flag outside a building.

Colyer others strongly criticized the display as disrespectful. The governor demanded that the altered flag be taken down. The university moved it to an art museum.

Meanwhile at the State Capitol we fly the flag proudly. #ksleg pic.twitter.com/WLIpTuWXyg