After drama over KU’s flag display, how are other sites displaying the artwork faring? 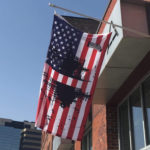 An art piece called "Untitled (Flag 2)," is pictured here on display at the Mid-America Arts Alliance in Kansas City, Mo. The piece is part of a nationwide public art project dubbed "Pledges of Allegiance."

One day after Gov. Jeff Colyer demanded — successfully — to see a controversial artwork removed from display at the University of Kansas, other participants in the nationwide “Pledges of Allegiance” project are reporting slightly different experiences.

The Journal-World spent Thursday afternoon reaching out to all 13 venues displaying “Untitled (Flag 2),” the same American flag-inspired artwork that got yanked from its outdoor display on the KU campus amid outcry Wednesday. The takeaway, from the four locations that responded to the newspaper’s inquiries? In other places, even down the road in Kansas City, Mo., folks don’t seem to mind the display — or at least, they’re not saying that they do.

All four venues the Journal-World talked to said reactions had been largely positive since they installed German artist Josephine Meckseper’s piece last week. Here’s what each of them said:

In fact, Maggard said, she and her colleagues hadn’t seen “much response” at all before Wednesday’s news at KU. But on Thursday, after the flag’s removal outside KU’s Spooner Hall the day before, things began to pick up a bit.

“Following the coverage, there were a couple people that were coming by and taking pictures and actually being pretty positive about it,” Maggard said.

At Mid-America Arts Alliance, the flag is displayed on a pole mounted to the building’s exterior, like the kind of flagpole you might see near a home’s front door. Maggard said there’s also a panel next to the building’s front entrance where passersby can read about the project. 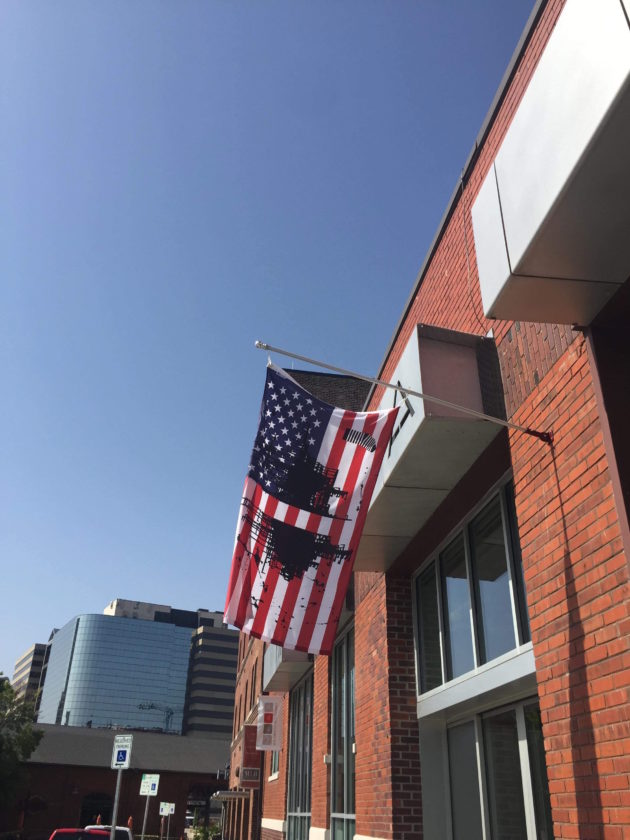 An art piece called “Untitled (Flag 2),” is pictured here on display at the Mid-America Arts Alliance in Kansas City, Mo. The piece is part of a nationwide public art project dubbed “Pledges of Allegiance.”

Call it the KU effect.

“But it’s not been as voluminous,” she said, referring to the dramatic events surrounding KU’s display.

At Cornell’s Johnson Museum, the flag is installed right outside the main entrance, with a label posted in the doorway. The spokeswoman, who did not provide her full name, said the museum has “treated the whole series like an exhibition.”

She also said the museum is standing in support of Creative Time, the New York City-based nonprofit leading the “Pledges of Allegiance” project, as well as the other participating venues, “hoping that free speech can continue to be encouraged.”

How has Meckseper’s controversial piece fared so far at RISD, one of the country’s most prestigious fine arts institutions? Pretty well.

“The answer to that is no,” said Matthew Berry, marketing and public relations associate at the RISD Museum, when asked if the museum had received any pushback for its flag display.

“We’ve gotten no pushback over this or any of the other flags,” he said.

When asked if the museum wanted to comment on Wednesday’s happenings in Kansas, Berry declined. He did, however, say that he and his colleagues had been following the story closely.

This historic site, home of the Revolutionary War’s Battle of Brooklyn, is billed on its website as “Park Slope’s unofficial town square.” The cultural and educational center is located in the heart of Brooklyn’s hipster-y Park Slope neighborhood.

Kim Maier, the site’s executive director, said as much when asked if her staff had received any pushback for its “Pledges of Allegiance” display.

“This is clearly a work of art and protected under the First Amendment, so we haven’t really gotten any pushback about it,” Maier said. “But I don’t know that people are particularly paying attention to it at the moment.”

Before installing the artwork last Tuesday, the Old Stone House’s board of directors did have a “very thoughtful” discussion around whether the flag should be displayed at a Revolutionary War battle site.

“As a public history organization, we went into this thoughtfully and had an extensive discussion with our board of directors around installing the piece and what it meant, and everyone was in agreement that we should go ahead and display it as an organization,” Maier said.

“We think it’s a really important way to have a conversation about the issues of the day,” she said of Meckseper’s artwork.

Because the American flag is such a treasured symbol to so many, Maier said, the Old Stone House decided to exhibit Meckseper’s look-alike design accordingly.

“We actually have a U.S. flag to the left, higher, in a position of honor, and Meckseper’s flag is to the right and a little lower and clearly (marked) as a work of art,” she said.

Maier also said she and her colleagues would be watching from afar as the “Pledges of Allegiance” story continues to develop here in Kansas.

KU did not respond to the Journal-World’s followup questions on Thursday.