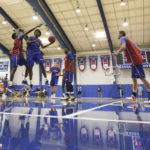 TULSA ? Veteran leadership is so important in March, yet so seldom explained as well as freshman Josh Jackson captured it Thursday afternoon from a seat at his locker.

With the benefit of nine months of growing up as a person and a player, starring and stumbling along the way, Jackson can see the purpose of those cold shoulders sent his way when he first scrimmaged with his new, college-seasoned teammates in June.

“First couple of weeks it was kind of hard on me. We were lifting weights every day, and coming out of high school, I didn’t lift weights much at all,” Jackson said. “My body was really sore. We’d go play pickup and those guys were a lot faster and stronger than I was, so it was really hard on me. I felt like they were head and shoulders above me.”

Younger teammates might have let human nature take over at that point and prop up the player on the court with the brightest future. Aware of how hard Jackson was going to be coached by Bill Self, how physical older players with more developed bodies would go after him once games started, the Kansas veterans did just the opposite.

“They would try to get in my head, say that I can’t shoot, push me around a little bit because I was weaker than they were, things like that,” Jackson said. “I definitely think it made me a lot better as a player, them doing that.”

Before playing a game, Jackson arrived with more fanfare than Frank Mason and Devonté Graham ever had experienced, and to that point they had combined for 1,726 points for Kansas.

Jackson didn’t fan the flames of the hype with a cliche televised signing replete with the hat trick, and the motivation for the rough treatment wasn’t born of jealousy, but he had to at least wonder if that was somewhere in the equation. He was new to college basketball. How was he supposed to know?

“Part of it was just trying to gain these guys’ trust, have them believe in me, believe that I could help the team, and I felt like early on that was kind of hard for me to accept,” Jackson said. “But after a while, I felt like I did a good job showing them I was there for them, trying to win as much as possible, and I wasn’t just there for myself.”

Looking back, Jackson knows his teammates were preparing him, accelerating the adjustment to college ball by zipping fastballs under his chin five months before his debut against Indiana in Honolulu.

“I didn’t realize it at the time; I can’t say that (I did),” Jackson said. “There were a couple of times where Devonté and I butted heads — never got physical or anything like that, but at the end of the day, it was just two competitors competing against each other. I appreciate him for that. I will always appreciate him for doing that.”

Jackson will end his career either with six consecutive victories or with a loss. Either way, he’s a veteran nearing the end of his college basketball career, confident in sending trash in the direction of teammates who gave him a cold baptism.

“Now there are times we’ll be in practice where I’ll mess with Devonté. I’ll push him around and post him up because he’s the little guy and we’ll just laugh about it,” Jackson said.

Regardless of whether Kansas plays Michigan State or Miami on Sunday after Friday’s formality — a sparring session with UC Davis — Kansas will have the experience advantage. And thanks in part to the older kids throwing his training wheels in the trash from Day 1, Jackson figures to show well in the final and most telling phase of his college career.