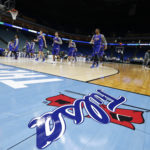 The Jayhawks warm up during a practice on Thursday, March 16, 2017 at BOK Center in Tulsa, Oklahoma.

Several Jayhawks on Thursday stressed the importance of playing a clean half-court game and strong execution against what KU coach Bill Self called “a good, sound team.”

“They guard,” Self said. “And they guard right and their ball-screen defense is super and they can play through a big. Their four man, (Chima) Moneke, is a guy that can give anybody problems, both rebounding and scoring the ball. They’ve got athletic guards. I really like them.”

Added KU freshman Josh Jackson: “We’ve just gotta try to keep it to a half-court game with them and run out in transition as much as possible.”

For the past couple of weeks, Self and the Jayhawks have talked about their mindset being a major key to their tournament success.

“We’ve talked a lot about it,” Self said. “And they seem pretty good … I like our mindset. I think it’s been positive. I think they’ve been focused. We’ve worked pretty hard in practice and, of course, we’ve got a bad taste in our mouth from the TCU (loss in Big 12 tournament).”

Added KU junior Devonté Graham: “Coach just tells us to play free. There’s pressure in it, but when you’re at this level and we’ve been through so much with each other, we’ve just kind of got a good feel for what we’ve got going on and we don’t have to be real tight or tense and we can just try to go out and play loose and have fun.”

UC Davis looked awfully careless with the ball during its First-Four victory over North Carolina Central on Wednesday night. The Aggies coughed it up 18 times and nearly saw their inability to take care of the ball — particularly in transition — cost them the opportunity to advance.

Kansas, which has always been good about jumping into passing lanes, has been much better in generating steals with its half-court defense during recent weeks. If the Jayhawks can do more of that and get easy baskets in transition, this one could be over early.

Provided he stays out of foul trouble, KU senior Landen Lucas has a handle on UC Davis’ biggest players, but he’ll have a little more help today than he did during the Jayhawks’ last game.

The 6-foot-8 Jackson, with all of that length and athleticism, will be back on the floor to help clean up the glass and defend length on the other side. Jackson’s focus appears to be on those two things.

“My assignment is to make sure Moneke doesn’t get eight rebounds and just try to contain him a little bit,” Jackson said. “It’s definitely going to be a fun matchup. Like he said after the game, he’s not afraid of anybody and I really respect hearing that from him. I’m looking forward to playing him.”