Tom Keegan: Bragg can help the Jayhawks take the next step 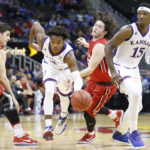 Kansas basketball coach Bill Self already had used three post players, including freshman Mitch Lightfoot, when he put Carlton Bragg in the Davidson game with 11 minutes remaining in the first half Saturday in Sprint Center.

The crowd responded with quick welcome-back applause for the sophomore forward from Cleveland who had been suspended when battery charges were filed against him and reinstated when the charges were dropped, all in less than a week that felt more like a month.

Bragg stumbled through most of his 10 first-half minutes. Josh Jackson, the freshman who again ensured victory by contributing in just about every area a basketball player can, set him up beautifully with an over-the-top pass and Bragg couldn’t finish the play. Later, he shot an air ball.

If Bragg’s season follows the rocky-start, strong-finish trajectory of his performance in KU’s 89-71 victory vs. Davidson, that will bode well for KU’s chances of cutting down the Sprint Center nets in the Midwest regional final and advancing to the Final Four in Phoenix.

A 6-foot-10 forward who always has looked more comfortable burying mid-range jumpers than jockeying for position underneath, Bragg stayed close to the basket, kept it simple, played to his size and produced.

He finished with seven points and eight rebounds in 18 minutes. In eight second-half minutes, he totaled five rebounds, three on the offensive glass, and five points.

“I think he just believed in himself,” said senior guard Frank Mason, the game’s defensive standout. “He had confidence in himself coming into the game. He didn’t really play well in the first half, but we we just told him in the locker room to stay aggressive and stay confident, and that’s exactly what he did. I was happy to have him back part of the team.”

In 39 minutes off the bench, Bragg and healing senior Landen Lucas combined for 15 points and 16 rebounds and did not commit a turnover. They had a big size advantage against Davidson and played like it.

“I thought they both played very well,” Self said. “I thought Landen was really good, you know missed that one uncontested one in the first half. I was going to go back with Landen, but I thought Carlton played just as well as Landen down the stretch.”

So he stayed with Bragg, no doubt a boost to the sophomore’s confidence as he tries to find a way to play with the same degree of comfort and effectiveness in traffic as he does sizing up his soft and sure mid-range jumper.

Once Big 12 play arrives, the points in the paint and rebounds at both ends will be tougher to come by than in Saturday’s game for all of KU’s post players, but part of the benefit of mixing size-challenged opponents into the non-conference schedule is that it can fuel a struggling post player’s sense of self-worth.

“He got his confidence,” junior guard Devonte’ Graham said of Bragg’s night. “We’ve been pushing him in practice, making sure he stays aggressive, brings energy, even though he’s coming off the bench, and I thought he did a great job of that tonight.”

Bragg has skill and size, a strong mentor in Lucas, and extremely aggressive, smart and talented teammates on the perimeter. Next to freshman center Udoka Azubuike (two quick fouls, limited to seven minutes of playing time), Bragg is the team’s biggest X-factor in that he has plenty of untapped potential. In the best-case scenario, Bragg will continue to take baby steps forward, Azubuike can take even bigger ones, and Lucas will stay healthy to lend his forceful, steadying hand.

Solid, consistent production from the frontcourt will suffice because the perimeter players consistently will give foes more than they can handle.