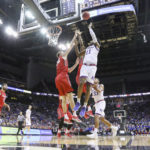 Kansas guard Josh Jackson (11) gets inside for a bucket against Davidson during the second half, Saturday, Dec. 17, 2016 at Sprint Center.

What is not debatable is that the Jayhawks, who trailed at halftime for just the second time this season, out-played, out-toughed and outscored the Wildcats convincingly in the second half en route to a hard-fought, 89-71 victory Saturday night at Sprint Center.

“I’ve been telling them all along I’d like to see how we play, if we’re tough enough to guard, when we don’t make shots,” KU coach Bill Self said after the game. “And in the first half we really didn’t, but in the second half I thought we did.”

Trailing 43-42 at the break and by as many as five early in the second half, the Jayhawks dug in defensively and started harassing everything Davidson did.

Whether it was jumping passing lanes, hitting the glass on both ends or challenging shots that, in the first half, were much easier to step into, the Jayhawks (10-1) made the Wildcats (5-4) uncomfortable in every way possible during a second half that saw Kansas use a 23-5 spurt to gain separation and end the game on a 31-13 run.

“I think the second half was one of the best halves we’ve played so far,” said junior guard Devonte’ Graham, who scored 10 points and swiped three steals in 32 minutes. “Just staying aggressive and having that we’ve-gotta-get-stops mentality, because in the first half they were getting whatever they wanted.”

After scoring the first basket of the game on a tip-in of his own miss, Kansas freshman Josh Jackson continued to impact the game more than anyone on the floor with hustle plays, offensive rebounds and stifling defense.

In the game’s first 10 minutes alone, Jackson had three offensive rebounds, all of which led directly to points for the Jayhawks. However, when Jackson picked up his second foul midway through the first half, the tone of the game changed and Davidson started to look much more comfortable.

Davidson coach Bob McKillop said Jackson heading to the bench did not inspire the Wildcats to change anything they did, but it was evident, on both ends of the floor, that Jackson’s absence helped the Wildcats find their flow.

“I don’t think it helped us at all,” said Self, who noted that Jackson was close to having a “bust-out” game. “We didn’t finish the half near as strong.”

Davidson finished the half 7-of-16 shooting from 3-point range — compared to 0-of-8 for the Jayhawks — and joined Duke as the only other team to lead this group of Jayhawks after 20 minutes of play.

Despite trailing, the Jayhawks said the halftime talk was more about execution and less about panic, and their play in the final 20 minutes proved they were listening.

“There’s not many things less significant than the score at halftime,” Self said. “Although you’d rather be up than down, there’s no question about that.”

It took the Jayhawks nearly 23 minutes to find the bottom of the net on their first 3-point make but just 38 seconds to find their second.

After a pair of Davidson 3-pointers to open the second half pushed the Wildcats’ lead to five, Jackson (18 points, eight rebounds in 27 minutes) splashed the Jayhawks’ first three of the night with 17:09 to play to pull Kansas within two at 49-47.

Jackson’s triple came on the back end of a bad-play-gone-oh-so-good as Landen Lucas’ offensive rebound of a missed free throw by Graham led directly to the Jackson’s three from the corner. Seconds later, after another second-chance scrum by the Jayhawks, Frank Mason III drained one from the opposite corner to put Kansas back in front 50-49.

“Second half, we had a couple of great offensive rebounding possessions,” Self said. “We did a really good job of creating some energy off of the offensive glass.”

After a nip-and-tuck few minutes left things tied at 58, the Jayhawks ripped off a 23-5 run over the next seven minutes to bury the Wildcats and send the Sprint Center crowd out to brave the elements with a smile on its face.

By game’s end, that final run wound up being 31-13, but it was that initial spurt that broke Davidson’s spirit.

Most of that annihilation came as the result of terrific balance. Four Jayhawks reached double figures in scoring, three others came within a shot of joining them and Kansas out-rebounded (43-34), out-shot (.485-.429) and out-hustled (10 steals and five blocks to four steals and one block) Davidson, most of it coming at the most crucial times.

But that whole sensational second half was the result of the Jayhawks’ effort on the defensive end and that was what the Jayhawks were most proud of when they bundled up to head to the bus for the short ride back to Lawrence.

“It’s a game of runs,” Jackson said. “Everybody’s gonna make a couple shots here and there. But it’s all about who can string the most together and get stops while doing it.”

The Jayhawks will close the non-conference season Thursday at UNLV in Las Vegas before opening Big 12 play Dec. 30 at TCU.