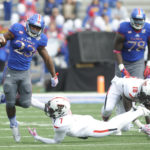 Kansas running back De'Andre Mann (23) escapes a tackle by Texas Tech defensive back Jah'Shawn Johnson (7) during the first quarter on Saturday, Oct. 17, 2015 at Memorial Stadium.

After three straight sub-par efforts on the ground, the Kansas running game got back on track Saturday during a 30-20 home loss to Texas Tech.

The Jayhawks finished the game with 145 yards on 40 carries.

Senior De’Andre Mann did most of the heavy lifting, finishing with 107 yards on 15 carries, and senior Taylor Cox scored KU’s lone rushing TD of the game, a one-yard run in the fourth quarter that cut Texas Tech’s lead to 23-20.

While a suddenly healthy Mann said he was a little extra fired up because he learned early in the week that he would get the start, it was the play of the Kansas defense that had him really fired up.

“I was on the sideline screaming like a little kid,” said Mann, who sparked the KU offense with a 41-yard run on the game’s first possession.

“They were ballin’,” the senior back added of KU’s defense. “We just gotta keep battling and capitalize.”

The Jayhawks won Saturday’s opening coin toss for the second week in a row and, this time, elected to receive the opening kickoff…. Junior safety Fish Smithson recorded the first interception of his career in the first half…. Walk-on Hudson Hall made his KU debut on special teams….. Daniel Wise’s blocked extra point marked KU’s first in that category since Brandon Rideau blocked a PAT against Oklahoma in 2004…. Temperature at kickoff was 52 degrees, under partly cloudy skies with winds of 9 mph out of the southeast.