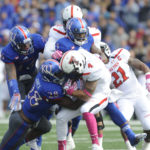 “I thought we were at a point offensively where we weren’t actually. I thought we had mature players that could get it done and handle it,” Kingsbury said after Tech’s 30-20 win over the Jayhawks.

The victory wasn’t assured until safety Jah’Shawn Johnson scored on a 27-yard interception return with 4:07 to play.

“Guys got nervous. Really we all just choked on that side of the ball is the only way to put it — drops and penalties and fumbles, not interested in playing hard. That’s on me as a head coach,” Kingsbury added.

The Red Raiders did gain a healthy 584 yards to KU’s 475. However, quarterback Pat Mahomes II was sacked five times on a day he hit 30 of 51 passes for 359 yards with one touchdown and one interception. Entering the game, Tech had allowed just two sacks all season, ranking third in the country in that category.

“Offensively we lose Le’Raven (Clark, tackle to injury) and we just fall apart,” Kingsbury said. “Their D-line got after us. Our offensive line played terribly. We were lucky to win the game.”

Kingsbury was hard on himself after the narrow victory.

“Poor coaching. I did a bad job this week getting them ready to go. The 11 a.m. kickoff … I thought I had a good plan in place. Obviously didn’t. That’s on me,” he said.

Defensive end Branden Jackson — who along with teammate Breiden Fehoko failed to cover a Ryan Willis fumble in the end zone for what should have been a sure touchdown with Tech up by just three points late — questioned Tech’s mental frame of mind.

“I feel that’s just people underestimating the opponent, not understanding this is college football, any team can beat any team, especially in the Big 12,” Jackson said. “Despite our record, when you look at teams on paper … they have great players.

“Kansas has great players. They will be a really good team going forward. I feel some people came out flat and expected Kansas to not be into the game because of the way the season is going right now. It was the complete opposite. They came out here with energy. The crowd was in it and we had to respond.”

Jackson was impressed with the defense wrapping up the victory late.

“On the defensive side of the ball we said, ‘We’re not going to lose this game. Put it on our shoulders for once to make the push and not have the offense have to carry the load,'” he said.

Kingsbury — he said running back DeAndre Washington (160 yards, 22 carries, one TD) was the only Raider to have a good game offensively — promised the Raiders would correct what hindered them versus KU. Tech travels to Oklahoma on Saturday.

“Offensively, we took a huge step back but I’ll get that right. We can get the offense going this week and that won’t happen again,” the former Tech quarterback said.