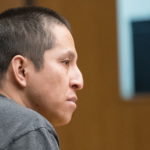 Despite a sorrowful, tearful plea for the judge’s mercy — either for probation to keep working to support his family, or a shorter prison stay to return to Mexico and rejoin them sooner — Jesus Cervantes Garcia is on his way to prison for 2 1/2 years.

The prosecutor said prison is due punishment for what Cervantes Garcia did: while mowing the lawn at Lawrence High School, proposition a 16-year-old girl and pay her $8 to give him oral sex in the woods nearby.

“It is just outrageous that someone who is working at a school would proposition and receive sex, and pay one of the students,” prosecutor Mark Simpson said. “That is a serious offense, and something that he ought to go to prison for.”

He previously entered a plea and was convicted of unlawful sexual relations, a felony. Initially he’d been charged with commercial sexual exploitation of a child, a more severe felony.

With his lack of criminal history, Kansas sentencing guidelines call for a prison sentence of 31 to 34 months for the conviction, Judge Sally Pokorny said.

She sentenced him to 31 months in prison, followed by two years of post-release supervision. He also must register as a sex offender for 25 years.

Pokorny said she hadn’t dealt much with the law barring commercial sexual exploitation of a child, but the fact that such a statute exists indicates it’s become a problem in society — and regardless of whether the child participated and took the money willingly, it’s a crime for a reason.

“They’re children, and they can’t make rational adult decisions about such participation,” Pokorny said. “It’s up to the adults in this world, not the children in that position.”

The crime occurred after school hours on a Friday in September 2017.

The girl told a Lawrence High School staffer about the incident a couple of weeks later, and Lawrence police started investigating and identified Cervantes Garcia as the lawn worker the girl encountered.

Cervantes Garcia told police he paid the girl $9 for the sex act even though she’d asked for $15, because that was all he had in his pocket, according to a police affidavit. The girl told investigators she got $8.

While Cervantes Garcia’s immigration status has not been confirmed in open court, the Journal-World learned from U.S. Immigration and Customs Enforcement that he is a Mexican citizen in this country illegally, and that he had previously been deported in October 2016.

At the time of the crime, Cervantes Garcia was a subcontract employee for Perfect Cut Lawn and Landscaping, contracted by the school district to mow at Lawrence High and other sites.

The business owner, Michael Molle, previously told the Journal-World he didn’t know his employee was in the country illegally, and that he fired him several days after the police interview because the school district suspended his entire business over it. Frustratingly, Molle said, police and the school district refused to tell him what Cervantes Garcia was accused of — he had to read about it in the newspaper close to a year later.

Cervantes Garcia’s appointed attorney, Angela Keck, had asked the judge to depart from sentencing guidelines and place her client on probation or sentence him to just two years in prison.

Clinical psychologist Robert Barnett, who performed a psychosexual evaluation on Cervantes Garcia, testified that Cervantes Garcia had no diagnosable mental illnesses, substance abuse problems or pedophilia. Barnett said he believed Cervantes Garcia would be a good candidate for probation and was unlikely to reoffend, especially given the level of remorse he felt about the crime.

“He seemed to be particularly embarrassed,” Barnett said. “He had a great deal of trouble talking about it.”

His face curled to his chest and his shoulders hunched, Cervantes Garcia wept as his lawyer read a letter he wrote, translated from Spanish into English, for the judge.

“Since I was a little boy my life has been very hard,” the letter said. “Life took my father and my firstborn, now my mother’s health is critical … I know I never should have committed such a mistake.”

Cervantes Garcia said he wanted to be able to care and provide for his children, his mother and other relatives — if not on probation here, then by returning to Mexico and starting a business.

Standing and speaking himself in court, through an interpreter, Cervantes Garcia said he apologized.

“I’m ready to sign up for whatever,” he said. “I just want to have another opportunity.”

Simpson also highlighted that Cervantes Garcia admitted to the psychologist that he’d bought sex from prostitutes twice before victimizing the girl at Lawrence High.