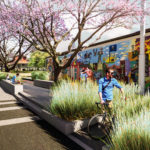 A proposed resting area near the mural at Ninth and New Jersey streets is shown in this rendering from a recent East Ninth design document.

The Lawrence City Commission will discuss a concept design Tuesday for the long-debated East Ninth Street project, but likely won’t vote on it, a few commissioners said Monday.

Before commissioners see the design during their regular meeting, they’ll discuss during a budget work session Tuesday a draft of a capital-improvement plan that shows the project as unfunded. The document led to questions Monday from those involved in the project whether it would even be considered in 2017. And, as the plan moves to City Hall, it continues to see differing opinions from East Lawrence residents and businesses.

Mayor Mike Amyx, who was part of a 15-member committee formed around the project, said he wanted commissioners to make their opinions known Tuesday. The East Ninth Citizens Advisory Committee, of which Amyx was a part, met a dozen times — six more than planned — and voted 13-2 in March to support the design.

Commissioner Matthew Herbert said he’s an advocate for the project but that a vote may be delayed a week for more review. Commissioner Stuart Boley said he’d like more time to consider the issue, and Vice Mayor Leslie Soden and Commissioner Lisa Larsen did not respond Monday to calls for comment. At previous junctions, Soden, an East Lawrence resident, expressed criticism of the project.

“Once the public comment is done, we should have a frank discussion on what the direction ought to be so the public and staff really know where we’re going on Ninth Street,” Amyx said.

Josh Davis, who lives along East Ninth Street and has attended many of the 40-plus public meetings about the project, echoed that thought.

“A lot of time and community involvement has been put in, and it makes sense for a decision to be made one way or another,” Davis said. “I’d like to see action.”

A vote of support Tuesday would initiate the second phase of the design, starting technical drawings for construction. Project designer Josh Shelton, with Kansas City-based el dorado inc, has said costs for the second phase could fall between $275,000 and $375,000, depending on what’s approved in the concept design.

ArtPlace America notified the Lawrence Arts Center nearly two years ago that it won a major grant for the idea of recreating East Ninth Street into an arts corridor.

Groups of East Lawrence residents created opposing websites on the issue, where they have posted letters, videos and other comments along the way. The project was credited with drawing a record number of voters to the East Lawrence Neighborhood Association election in November.

Since June 2014, the idea for the corridor morphed from “Free State Boulevard: From the Studio to the Streets” back to what Shelton has called a “light touch” to the existing East Ninth Street.

The current design, estimated at $3,500,000, includes two driving lanes for most of the six-block corridor, along with sidewalks on each side and an 8-foot shared-used path for both pedestrians and bicyclists. Parallel parking would be available in places on both sides of Ninth Street.

In a blog post circulating over the weekend, Davis wrote the project has received “beyond an acceptable amount of discussion” and come out with majority support, which commissioners should note.

“If the city is going to ask people to participate in a project to that extent and facilitate a project like this, I hope they’re actually empowering stakeholders to have a voice at the table,” Shelton said.

But there’s still a strong cell opposing the design, as evident in a video created by the group last week; letters to the Historic Resources Commission and East Ninth Citizens Advisory Committee; and the public comment periods of recent meetings on the project.

Those against it have expressed fear the project might increase property values and they could no longer afford to live and work in East Lawrence. They’ve also said they don’t support the changes in parking and asserted the newly estimated $3,567,945 budget doesn’t include all of the costs.

“This plan is too costly at a time of belt-tightening,” read the letter signed by 32 against the plan. “As a community, we need to put equity before extras, and people values before property values.”

The City Commission has previously approved an estimated $2,750,000 for construction of the arts corridor.

In a draft of a five-year capital improvement plan released Friday, the approximately $3,500,000 now estimated for the project was listed as “unfunded.” In a memo about the capital improvement plan, City Manager Tom Markus said the unfunded projects were ones that “are not financially feasible at this time” without adjustments to Lawrence’s debt service or to other projects.

Joan Golden, chair of the Lawrence Arts Center, emailed Markus on Monday, asking that he “reconsider your recommendation to withdraw the fund for this project.”

She said the withdrawal made the decision for city commissioners, without them having the opportunity to comment or vote on it.

“By publicly withdrawing the funds prior to community input at the City Commission meeting on May 24, the city staff, rather than the City Commission, seems to be predetermining the outcome of this high-profile project that has been in the works for several years,” she wrote. “… With the tremendous amount of work and effort that have been spent by many community stakeholders in this important project, we believe the project deserves an open public discussion and a decision by the City Commission.”

City commissioners will convene for their regular meeting at 5:45 p.m. Tuesday at City Hall, 6 E. Sixth St. They will discuss the five-year capital improvement plan during a work session from 3 to 5:15 p.m., also at City Hall.