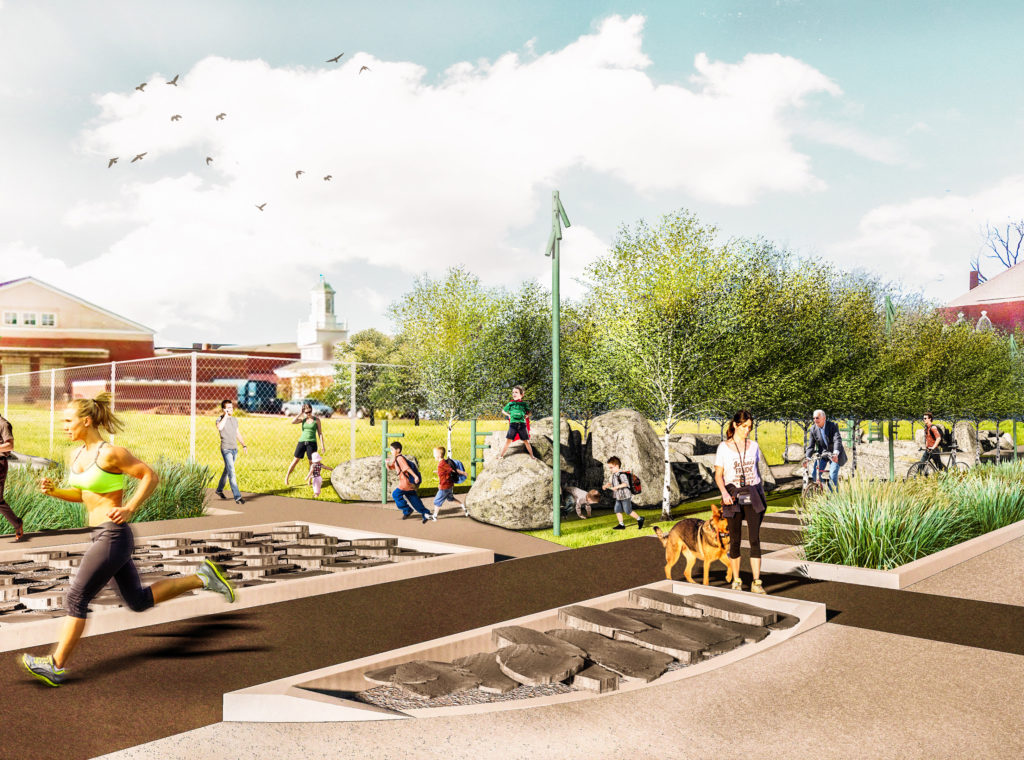 If you’re walking, biking or gathering along East Ninth Street in the future, light displays, sound signals, a rock formation and tall native grasses could be part of your experience.

Those components were all included in a design voted upon Wednesday night by a citizen advisory board established to review plans for the proposed East Ninth Street arts corridor.

The vote, 13-2 in favor of the design, triggers a public process that will start with a Monday meeting of the East Lawrence Neighborhood Association. The design will also have to go before the Lawrence Cultural Arts Commission, and maybe some other public boards, before it winds up with the Lawrence City Commission sometime in May, explained Porter Arneill, Lawrence’s director of arts and culture. 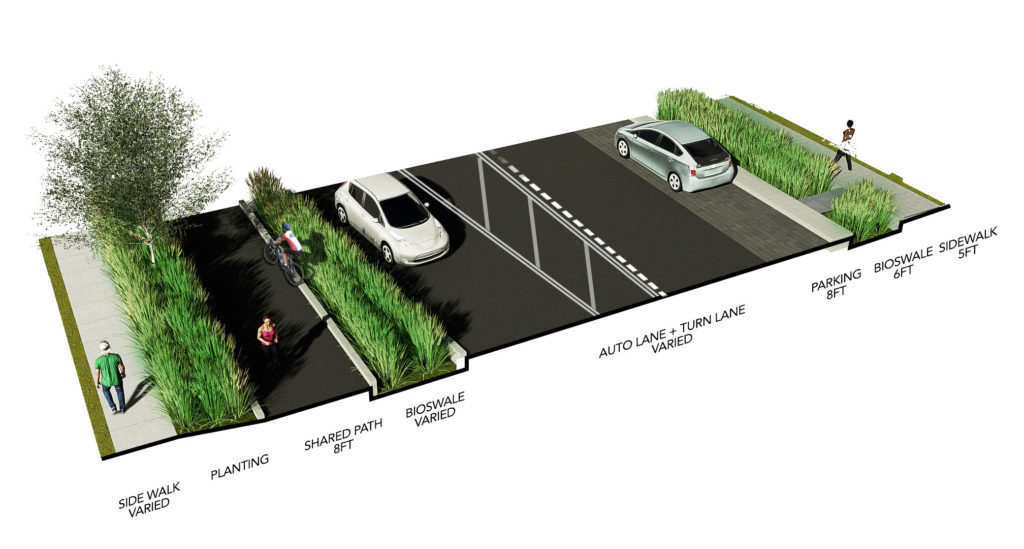 Proposed landscaping along Ninth Street from New Hampshire to Rhode Island streets is shown in this rendering from an East Ninth concept design document dated March 25, 2016.

Members of the East Ninth Citizens Advisory Committee heard Wednesday about some of the art that could be infused into the design.

Derek Porter, a New York City and Hudson Valley-based lighting designer, is a commissioned artist in the project. He wants to install poles, approximately 4 inches in diameter, that create low-level “light pools” on the sidewalks and gathering areas along the corridor.

According to the final draft of the design, Porter would create choreographed light displays that would respond to pedestrians “without emitting light pollution or disturbing nearby residents.”

Another commissioned artist, assistant painting professor James Woodfill, is proposing incorporating speakers in certain spots of the corridor that would play a variety of sounds. Some of those sounds may be picked up from nearby New York Elementary School and projected onto the street, Shelton said.

“These are very focused sound signals,” Shelton explained. “He wanted me to tell everyone not to freak out when he says ‘focused sound signals’ because he’s exploring speakers that would be mounted where you could only hear the sound on the sidewalk in a specific place.”

The point is to create “sweet spots,” the plans say, “a convergence of fleeting signals” to get pedestrians to notice overlooked details of the streetscape. 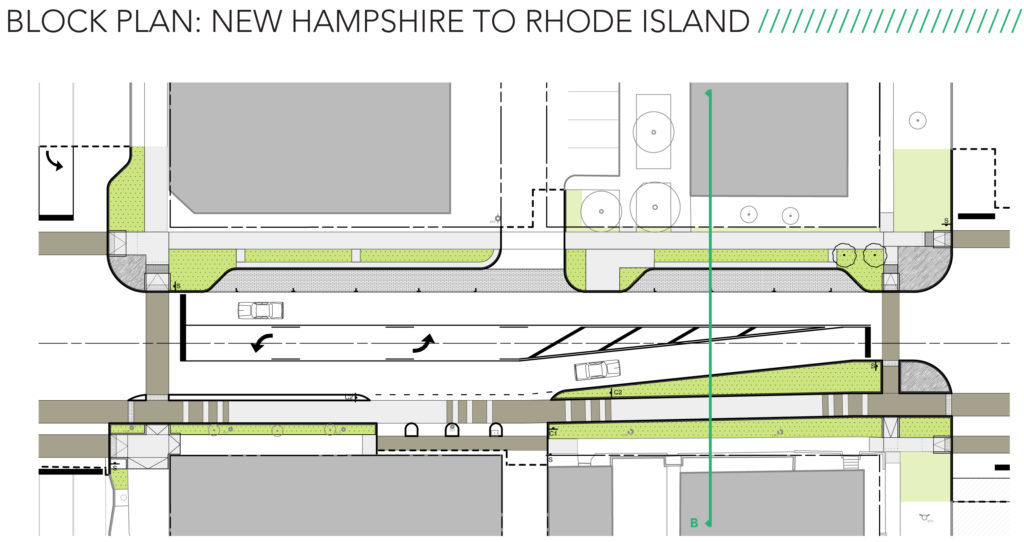 The rearrangement of a stretch of Ninth Street from New Hampshire to Rhode Island streets is shown in this rendering from an East Ninth concept design document dated March 25, 2016. This block of the street narrows from three lanes to two lanes.

A large rock formation would also be part of the corridor under the current design. Artist Jarrett Mellenbruch is hoping to select large rocks from regional sources, deliver them to the street and arrange them in a pattern between New York and New Jersey streets for people to lean against, sit and play on.

After a member of the public asked about it, Mayor Mike Amyx said the city would be liable for any injury on the rock formation.

Work on the arts corridor was kickstarted in 2014, when the Lawrence Arts Center won a $500,000 ArtPlace America grant that will be used to fund the art and artists involved.

The design recommended by the board Wednesday also includes the preservation of a historic brick sidewalk, a bike zone at Massachusetts Street and native plantings that would be used for storm water management.

From Massachusetts Street, the roadway is three lanes, until it pares down to two lanes at Rhode Island Street. From Rhode Island to Delaware streets, the roadway is two lanes, with sidewalks on each side and an 8-foot shared-use path for both pedestrians and bicyclists. There’s also parallel parking on the south side of Ninth Street.

“I’m very impressed with how you balanced the requests of all the stakeholders coming together,” said board member Emily Peterson, co-owner of Merchants Pub & Plate. “The evolution of it has come to a point where I’d recommend we send it to the city.”

The design presented Wednesday came with an updated budget. The total is now estimated at $3,567,945.

A stormwater management plan is illustrated in this rendering from an East Ninth concept design document dated March 25, 2016

The meeting was the final –and 12th — of the East Ninth Citizens Advisory Committee. The group was originally scheduled to meet only six times.

The Friends of East Ninth, a group of about 20, passed out its written evaluation of the design Wednesday.

In part, the group said in its evaluation that a reduction in parking would place an “undue burden” on residents and businesses. It also expressed safety concerns for bicyclists using the shared-use path, putting them “in direct conflict with cars and trucks entering and leaving alleyways.”

The group also wrote that it wanted more information about the art installations.

“There is no clear plan for how artists’ work will be incorporate into the plan and how it could impact the neighborhood,” the critique reads. “Art is a powerful tool for shaping how a place is understood and used. Without a clear plan, we cannot determine how this work will affect the social fabric of East Ninth.”

If the design were to get approval from the City Commission, the project would go into a second planning that would conclude with a more detailed, technical design.

“Thank you all for coming together,” Amyx said. “This is what Lawrence, Kansas, is about. Really, a lot of the work has just begun.”