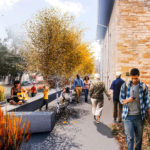 A resting area has been proposed near the Turnhalle Building, at Ninth and Rhode Island streets, as part of the East Ninth project. This rendering, which looks east from the intersection, shows simple seating walls and native grasses.

East Ninth Street has seen some odd things before, but surely on the list of the top five would be when there was a social club that combined beer drinking and gymnastics.

As I’ve reported before, that is the history behind the old 1869 stone building at Ninth and Rhode Island streets. It used to be home to the old German-American social club called Turnverein, which housed a beer garden but also required members to partake in a certain amount of gymnastics at the club. (If you think that needs more of an explanation, you can read some of its history here.)

To the disappointment of many, not even the advent of light beer could keep alive the idea of beer-drinking men wearing Spandex gymnastics leotards. Now the building — generally thought to be one of the oldest in the city — sits empty, and its owner is raising a red flag to the City Commission.

Lawrence businessman Tony Krsnich leads a development group that owns the Turnhalle. He’s also the leader of the group that has developed the Warehouse Arts District at the eastern end of East Ninth Street. Not surprisingly, Krsnich is a big supporter of the idea of an approximately $4 million project that would remake East Ninth Street into an arts corridor, complete with a new street, new pedestrian and bicycle features, and plenty of spaces for art.

City commissioners are scheduled to receive a much-debated design plan for the East Ninth Street project at their meeting Tuesday. Krsnich is now warning that if commissioners don’t approve the plan, he will lose a large investor in an approximately $1 million renovation project for the Turnhalle building.

Details were a bit lacking — Krsnich only identified the investor as a private business group — but he said the investor has placed a timeline of the end of the month for whether to proceed with the investment, which Krsnich has said would be in the high six figures.

“Our investor is going to move forward on our project or another project at the end of this month. That’s kind of the crux of it,” Krsnich said.

Krsnich said he’s worried commissioners aren’t going to vote on the project’s design at Tuesday’s meeting, but rather take several more weeks to consider the project. If that’s the case, Krsnich said the Turnhalle likely will sit empty for quite a bit longer because he’ll be forced to put the renovation project on hold.

“We have several interested tenants,” Krsnich said, noting a restaurant was the most likely use for the basement level, while a unique theater or performance space could happen on the ground floor. “The problem is everybody is making it contingent upon the Ninth Street corridor project moving forward. They’re only interested if Ninth Street is improved.”

You will have to make of this what you will. Krsnich obviously has a lot of financial reasons to lobby for the project. But he is becoming more vocal with his frustrations that it is taking the city so long to develop a plan for the street. The Lawrence Arts Center won a $500,000 ArtPlace America grant for the project in June 2014.

“I thought the street would be completed by now, or at least underway,” Krsnich said. “Now, I don’t even know if it is going to happen.”

The project has received a positive recommendation from the city’s Historic Resources Commission, but it still must win funding and key approvals from the City Commission.

Concerns of some neighbors, though, must factor into all of this, too. The process has been a contentious one, in part, because some residents of East Lawrence didn’t feel like they were included in the idea from its early stages. Concerns have lingered with some who believe the corridor will serve as a way to tie downtown and the Warehouse Arts District together, which they fear could be detrimental to the single-family neighborhood that lies in between.

Krsnich has begun characterizing that group as a very small minority, but city commissioners may view it differently. It does appear that the City Commission is split on the idea of the East Ninth Street project. The city would find itself in an odd position if it had to give back the $500,000 ArtPlace grant because it couldn’t agree on the corridor project. I would think that the commission would figure out a way to avoid that scenario, but it will be interesting to watch.

You do have to wonder whether more time will do any good on this project, or whether everyone’s opinions are set in stone.

• Where did I put that leotard? Plans for a new microbrewery and apartment complex in East Lawrence are moving ahead.

As we reported in December, plans were filed by Lawrence businessman Adam Williams and Lawrence brewer Matt Williams to convert the old SeedCo building at 826 Pennsylvania Street into a brewery, restaurant and apartment building.

Well, those plans are becoming more definite. The group has recently purchased the property, and now is awaiting site plan approval from Lawrence City Hall. The new plans show the SeedCo building — which is next door to the Cider Gallery — growing by two stories in height. The new floors would house three two-bedroom apartments and 12 one-bedroom apartments.

The remaining ground floor and basement space would be devoted to the microbrewery and restaurant, plus the needed space to actually manufacture and store the beer. As we reported in December, the new venture would be called the Lawrence Beer Company.

Adam Williams said he hopes to receive city approvals in July and have the project completed in about 12 months.

As for the apartments, Williams said the group is looking at making some of the apartments part of an affordable housing program, but he said the details for that still need to be finalized.