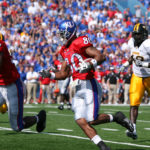 Kansas running back Toben Opurum (35) clears the way for a touchdown by receiver Dezmon Briscoe during the first quarter, Saturday, Sept. 26, 2009 at Kivisto Field.

“Todd Reesing outplayed me because they won the game. That’s the way I look at it,” Davis said after the Golden Eagles’ 35-28 loss to Kansas University.

“Kansas outplayed Southern Miss. At the end of the day, that’s what matters.”

He completed 28 of 42 passes for 331 yards, with three touchdowns and one interception and one lost fumble. He also was sacked once while gaining 26 net yards rushing. Reesing hit 30 of 41 passes, also for 331 yards, three TDs and one pick. Reesing, who was sacked five times, had minus-26 net rushing yards.

The Golden Eagles of Conference USA don’t lose often. They took an eight-game win streak into the game at No. 20-ranked KU.

“We knew it’d be a four-quarter game. We knew there’d be adversity in the game,” Golden Eagles coach Larry Fedora said, referring to injuries to receiver DeAndre Brown and running backs Tory Harrison and Damion Fletcher. “I don’t think our guys ever flinched. They kept playing and playing.

“I thought when the defense got the ball back for us with two minutes left and no timeouts … I thought we’d march right down the field. I felt confident that way.”

The Eagles fielded a punt and took over at their own 33 with 1:53 left. Davis was sacked once and fired three incompletions as KU took possession and ran out the clock.

Southern Miss. squandered a pair of scoring opportunities late in the first half with the score tied at 14. Davis fumbled it away at the KU 21 with eight minutes left. Davis was stopped for no gain on a fourth-and-one call from the KU 16 with just :14 left. Fedora thought the team had time to score a TD with one timeout left, deciding against the field-goal try.

“It’s disappointing we didn’t convert both times,” Fedora said, noting the biggest key in the game was Southern Miss. not being able to establish a running game (64 yards off 26 carries). “You get in a game like that, you can’t waste those kind of opportunities.”

Bumps, bruises: Brown, who is considered one of the best young receivers in the country, hurt his shoulder on a 49-yard catch with 71?2 minutes left in the third quarter. He didn’t play the final two series. … Harrison suffered his undisclosed injury on the opening kickoff. He carried once for three yards. … Fletcher (27 yards, 10 carries) did not play the final two series because of his undisclosed injury.