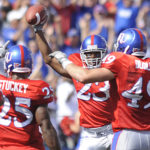 Kansas defensive back Ryan Murphy comes up with an interception against Southern Mississippi on Saturday, Sept. 26, 2009 at Memorial Stadium.

The TV camera lights and the winning smile lit up Ryan Murphy’s face again Saturday, a slice of nostalgia for the former Free State High superstar quarterback and defensive back.

Murphy, subbing in at the nickelback position, had two big fourth-quarter highlights that played a big role in Kansas University surviving Southern Mississippi, 35-28, Saturday in front of 50,025 fans in Memorial Stadium.

“I feel like I’ve finally made a step forward,” said Murphy, a third-year sophomore who signed with Kansas as a four-star recruit. “You finally make your first play, and then one comes after another. It felt like those old days at Free State making plays. It feels great.”

Rare is the player advanced enough to play right out of high school. Even more rare: a high school star who understands he’ll be in the majority and have to wait his turn.

“Definitely not,” Murphy answered, asked if he thought he would have to wait this long to play. “No. Every kid comes out of high school thinking you’re the best. You have to pay your dues, learn to work hard. I’m just glad to finally be on the field contributing.”

Murphy’s first big play at KU came on third-and-15 from the Southern Miss. 43, when he intercepted a pass from quarterback Austin Davis, who had identical yardage (331) and touchdown pass totals (three) as Todd Reesing.

Murphy hit the deck to snare a sinking errant throw from Davis.

“I settled in my zone,” Murphy said. “Once I turned around, I just saw the ball, and I drove and tried to make a play on it. I caught it, and I really didn’t know what to do then. I was just excited. I was just happy to finally make a play. … The game was kind of moving a little bit fast, but I felt like I was holding my own. Finally when I made that play, it kind of felt like, ‘I can do this. This is why I’m here. I know coach (Mark) Mangino recruited me for a reason.’ It feels good.”

The interception did the most for Murphy’s confidence, but it wasn’t his biggest play. That came on third-and-three from the Southern Miss. 19, when Murphy brought receiver Leroy Banks to the ground after a one-yard gain, forcing a punt.

Murphy is known as a hard worker eager to please his coaches.

“Just from the sideline I thought he did a lot of good things today,” Mangino said. “He certainly plays with a lot of intensity. He likes to play this game. He just has to be a little bit more disciplined in his assignments, (an area in) which he’s come light-years. When we look where he was a year ago, we weren’t sure where he would fit in the plans, but he is really starting to understand the discipline of playing his position. He made some nice plays today. I’ll have to look at the tape to give you an honest overall assessment of his play, but it was a good day for him.”

It was the first, but it won’t be the last.