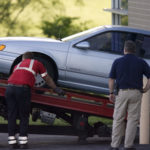 The vehicle allegedly owned by a suspect in the shooting death of Dr. George Tiller is loaded for transport from the Fred Allenbrand Justice complex Sunday, May 31, 2009, in New Century, Kan. Tiller, one of the nation's few providers of late-term abortions despite decades of protests and attacks, was shot and killed Sunday in a church where he was serving as an usher.

Scott P. Roeder, the man who was detained by Johnson County officials as a “person of interest” in the Sunday morning killing of George Tiller, has a brush with the law in his past.

He was convicted in 1996 of criminal use of an explosive after police discovered a blasting cap and other materials to build an explosive device in his car when his car was pulled over because his car was not registered. Roeder served time in Kansas prisons before an appeal was granted on the basis of the search of his car being unlawful, according to court of appeals records.

Roeder’s conviction on three driving violations were sustained and, according to court records, relates to a group that rejects the government’s right to require Americans to register their car with the government or maintain a driver’s license. According to an affidavit, the group is known as the Freeman Group.