A timeline of Mark Mangino’s tenure at KU 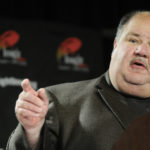 2004 — Kansas finishes with a 4-7 record. After a 27-24 loss to Texas in Memorial Stadium, Mangino criticizes officials for an offensive pass interference penalty, saying “That’s right. BCS. That’s what made a difference in the call in front of their bench. Dollar signs.” Remarks earn Mangino a $5,000 fine from Big 12 Conference office.

2006 — Kansas finishes 6-6 and is bowl eligible, but is snubbed for postseason berth.