But on election night, the 85-year-old former governor of Ohio made a bold prediction after his daughter won re-election in Kansas and Democrats made significant gains both statewide and nationally.

“What’s happening today in Kansas is a bellwether for what’s going to happen in the future for the Democratic Party,” Gilligan said.

Historically, Democrats have been the long-suffering minority party in Kansas. Of the state’s 1.66 million voters, 47 percent are registered as Republicans, 27 percent unaffiliated and 26 percent Democrat.

But now, Democrats have established themselves as a tough, growing adversary to the dominant Republican Party.

“People could look at what has happened here and find some new ideas based on what we’ve done,” said Kansas Democratic Party executive director Mike Gaughan.

Gaughan and other Democrats said the party benefited from national chairman Howard Dean’s “50-state strategy” and the cross-party appeal of Sebelius.

When Dean became chairman of the Democratic National Committee, his main goal was to try to organize and grow the party in all states instead of ceding states, such as Kansas, to the Republicans. 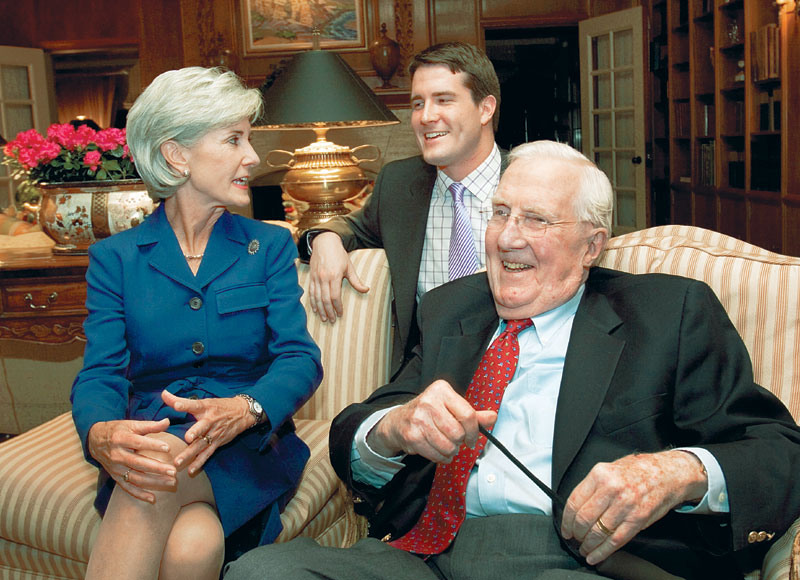 Democratic Gov. Kathleen Sebelius is joined at the governor's residence for dinner by her son Ned Sebelius, center, and her father, John Gilligan, on election night in Topeka. Gilligan predicts the tide has turned for Democrats in Kansas and across the nation.

“The American voters also sent a message to Democrats that if we show up, work hard and ask for their vote, we can win in any part of the country,” he said in a statement after the election.

Dean listed Kansas as a prime example of the strategy working.

“Strong leadership from the Democratic Party created a wave of party-switchers – moderate Republicans fed-up with the right-wing stranglehold on their party,” he said.

That was evident Election Day – Morrison switched parties to take on Kline, and Sebelius’ lieutenant governor running mate, Mark Parkinson, is a former chairman of the Kansas Republican Party. Boyda also had been a Republican, and several state House winners used to be in the GOP.

Gaughan said Kansas Democrats applied the 50-state strategy locally by organizing in areas in Kansas “that hadn’t seen the party for a while.”

For example, he said that in Lawrence, the party was well-established on the east side in the 3rd Congressional District, but made an effort to get better organized on the west side, which is in Boyda’s newly won 2nd District.

Working across the state and nation in Republican strongholds made voters familiar with Democrats and their message, officials said.

And while the Democratic takeover of Congress has been well-publicized, Democrats also made significant gains in state Houses nationwide.

Before the election, Republicans held a 28-22 edge in governors. That is now reversed, with Democrats holding a 28-22 lead.

Fifteen states now have both Democratic governors and legislatures, seven more than before the election.

Sebelius said voters responded to a Democratic message of working hard on tough issues and trying to seek bipartisanship.

“I heard it all over the state, people would say, ‘Why in the world can’t people work across party lines, what are they doing in D.C.?'” she said.

Kansans also thought the Republican Congress had gotten lazy, which made it seem further out of touch, she said.

“Congress, last year, had 92 work days in the entire year. That’s supposed to be a full-time job. In Kansas, legislators in a part-time job were here more than 92 days, and we actually got some results,” she said.

Sebelius also said that Democrats are now seen as the ones trying to get things done on a bipartisan basis. Because they are so outnumbered, Kansas Democrats are accustomed to reaching toward Republicans and independents.

“It’s not only Kansas, it’s Arizona, Wyoming and Oklahoma, and you look at states traditionally one would think they would be Republican states, and yet a Democrat is in the governor’s office and clearly works across party lines, and again has been re-elected with pretty resounding majorities,” she said.

Sebelius said that should serve as a lesson to the federal government.

And she said the 2006 election results bodes well for Democrats in 2008, a presidential election year.

Noting the majority of governors who are Democrats, she said, “That’s an incredible infrastructure across this country where people have connected with the CEO who is a Democrat.”