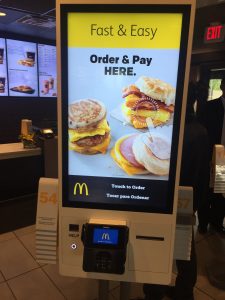 Self-serve kiosks have been installed in the McDonald's restaurant at 1309 W. Sixth Street as part of a major remodel of the site. A smaller remodel at the restaurant's 23rd Street location also installed the kiosks.

I am a ball of sunshine every morning, but I know of people who speak only in the language best described as daybreak grunt. It can create quite an ordeal at the McDonald’s counter if the poor soul taking the order doesn’t know that mggmffn, MGGMFFN! means my beloved would like a McMuffin, ASAP. I can now report changes at a pair of local McDonald’s restaurants have helped alleviate that situation.

As we reported in February, the McDonald’s at 1309 W. Sixth St. was slated for a major remodel that would require the lobby of the restaurant to temporarily close. Indeed, that work began in May, and the store recently reopened. A big part of the remodel was the installation of self-serve ordering kiosks. Now, if you aren’t quite in the mood to have a human interaction, you can use a large touchscreen in the lobby to order your meal.

What I didn’t know back in February was that a second McDonald’s location also would undergo a less visible remodel. The McDonald’s on 23rd Street also had the kiosks installed this summer, said Marilyn Dobski, an owner of the Lawrence-based company that owns the McDonald’s franchises in Lawrence and the surrounding area.

Dobski said the feedback from customers had been good. Evidently we must now have something in our DNA that causes us to love to touch screens because Dobski said the early returns are that people actually buy a bit more when ordering at the kiosk versus the counter.

But don’t worry. Dobski said the Lawrence McDonald’s restaurants absolutely have no plans to eliminate the option of ordering at the counter from an actual person.

The McDonald’s on south Iowa Street got the self-serve kiosks more than a year ago. That leaves only the McDonald’s at Sixth and Wakarusa without the kiosks. Tom Dobski said a remodel of that location was planned for March. It too will be a significant remodel of the restaurant’s exterior and lobby, including the addition of the kiosks and other upgrades. A spokesman for the local franchise said the lobby at Sixth and Wakarusa likely will be closed eight to 10 weeks while the work is underway next year. 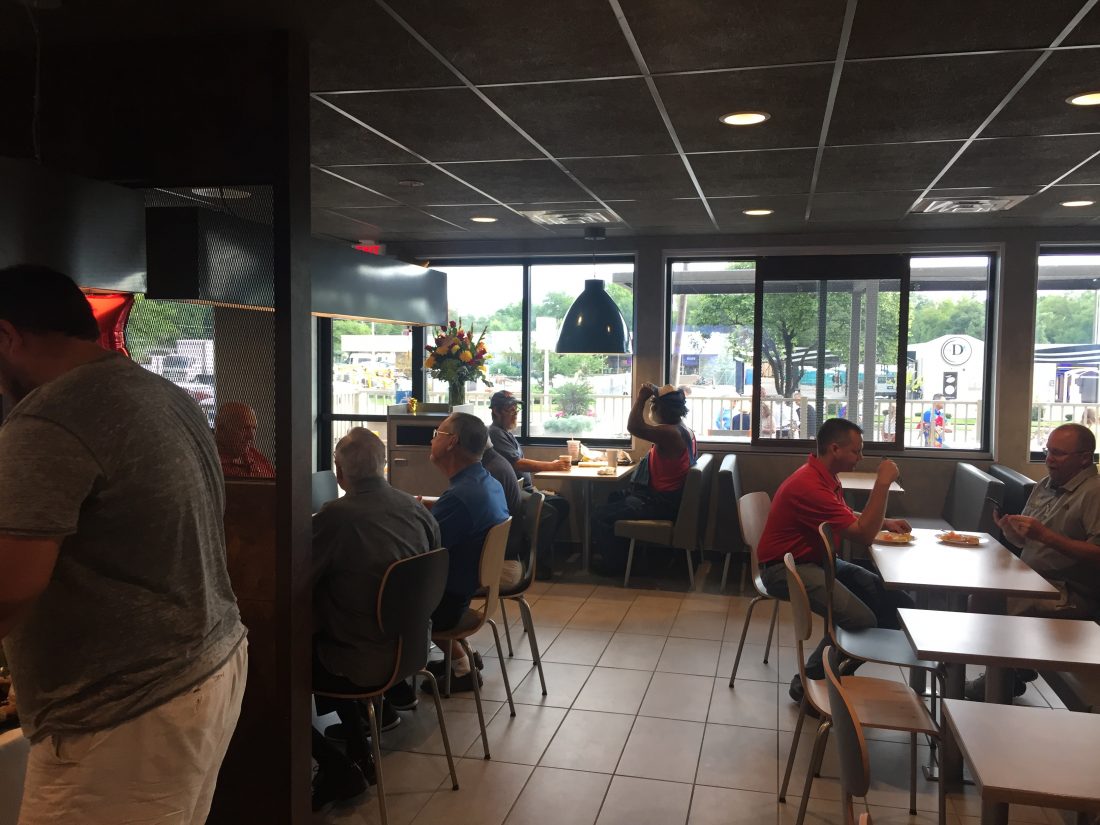 New furniture and decor were part of the renovation project at the Sixth Street McDonald’s.

In addition to the lobby remodel, which includes a more modern set of booths, furniture and decor, the facade of the building got a major facelift. That includes new landscaping around an outdoor patio area that is now directly accessible from the lobby. The project is part of McDonald’s Experience of the Future redesign program that is happening across the country. In addition to the cosmetic changes, the project also involves ADA improvements and several technology upgrades.

You can see the before and after photos of the Lawrence Sixth Street location below. 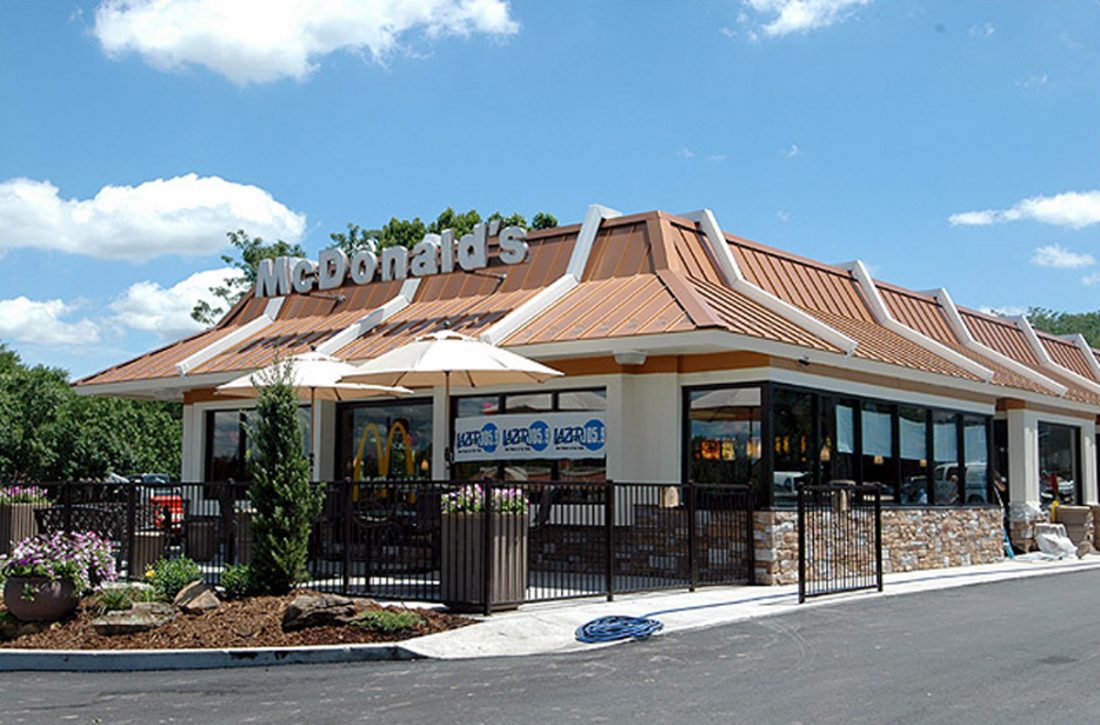 This file photo shows the McDonald’s at 1309 W. Sixth St. following a previous remodel in 2005. 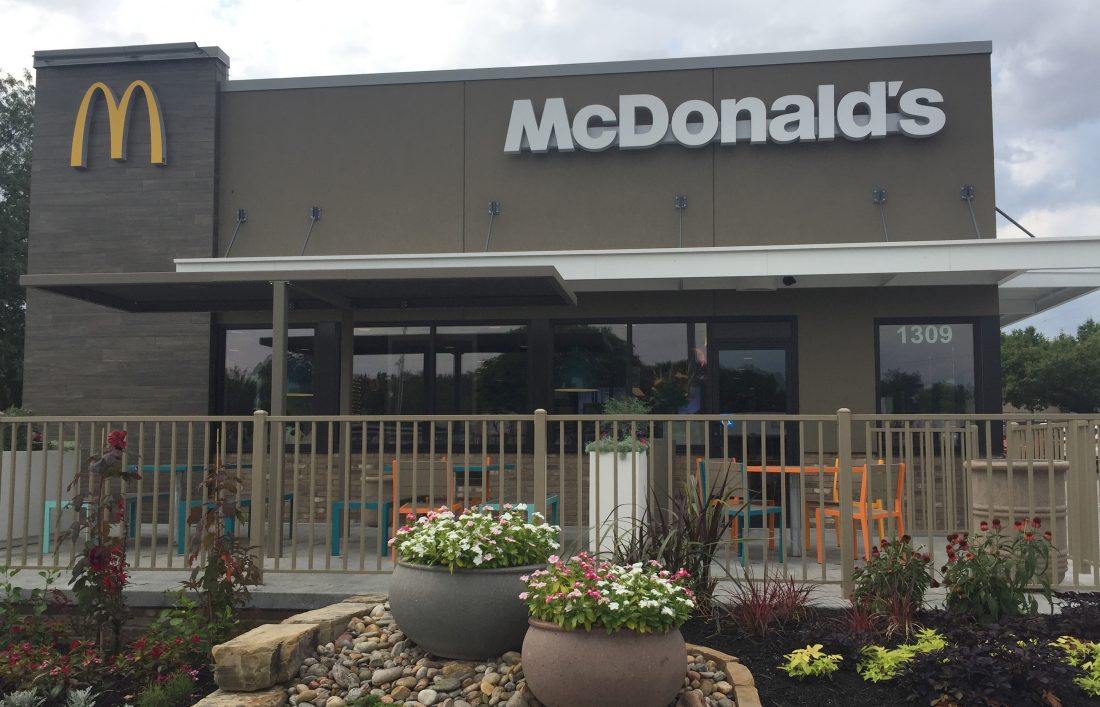 • I’m sensing an American theme here: We want what we want, and we want it now. (And if I can remain sitting during the whole thing, that would be great too.) That trend is behind some remodeling work underway at the Dillons store on 23rd Street.

Construction is happening just inside the set of front doors near the western end of the building. A small office for a curbside pickup program is being built. The company has filed plans at City Hall to modify the parking lot slightly as well. According to those plans, the four parking spaces closest to the northwest corner of the store will be dedicated to the pickup program. You can see more on this map filed with City Hall, although be aware that for some reason north is on the bottom of this map.

As for the pickup program, you likely understand that drill. Order your items online, and a store employee does the actual shopping for you. Dillons began offering the service at its Sixth and Wakarusa store in 2016, but now the program is expanding to the other side of town.

• While speaking of Dillons, I might as well pass along news from its parent company, Kroger, that may make its way to Lawrence someday. Kroger is testing a partnership with the Walgreens drug store chain, according to a report by the trade publication Chain Store Age.

The program basically creates a mini Kroger supermarket in a Walgreens store. Under the partnership, Walgreens will stock about 2,700 Kroger grocery items, including fresh meat, produce, dairy, frozen foods and several other items. The offerings will include a mix of national brands and Kroger’s cheaper private label brands.

The partnership began in October with a test of 13 stores in northern Kentucky. Now, the company is adding 35 Walgreens stores in the Knoxville, Tenn., area. The partnership is still in the test mode, so it is uncertain whether it ever will be rolled out nationwide. But the prospect is kind of interesting to think about. In some ways, it is a return to the old days where small corner markets were big players in the grocery world. Walgreens only has two locations in Lawrence — one at Sixth and Kasold and another at 23rd and Louisiana — so it is not like they would be scattered all over town. But if the trend continues, it perhaps provides more hope to a place like downtown Lawrence. Maybe it can’t get a full-service grocery store (or maybe it will), but it perhaps could get a drugstore with a sizable grocery department.

• It probably would be uncouth to mention a Walgreens project without also alerting you to news from earlier in the month. In federal filings, the drugstore chain said it expected to close 200 stores in the near future, according to a report by USA Today. The company hasn’t released a list of the store closings. Lawrence would have to be pretty unlucky to land on that list. The 200 stores represent only about 3% of the chain’s U.S. stores.