Talk of a downtown Lawrence grocery store revives, this time at a different site 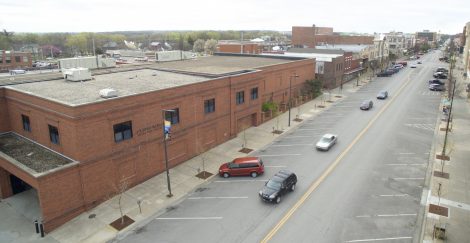 The former Lawrence Journal-World press facility, located at the northeast end of Massachusetts Street, is pictured in spring 2016.

It is time to keep our ears open for a new downtown grocery store rumor. This one doesn’t focus on the former Borders bookstore location at Seventh and New Hampshire streets, but rather is a block away at the old Journal-World printing plant.

Dan Simons, a member of the family who owns the printing plant location, confirmed that the property is under contract. He also confirmed that his understanding is a grocery store is one of the ideas receiving consideration by the potential buyer.

If you are confused about the location, it is a tough one to miss in downtown. The old printing plant is near Sixth Street and stretches from Massachusetts to New Hampshire streets. It basically is the first building you encounter when turning onto Mass. Street from the north.

“I think we are working with a great group that is highly thought of,” Simons told me. “We’re excited to hopefully bring a significant amount of square footage at the entrance of downtown into use. We would be glad to get jobs and dollars and taxes back into downtown. Downtown needs all the love it can get.”

Simons didn’t disclose the group that has put the property under contract, nor did he provide details on the type of grocery store. As a reminder, grocery stores come in many varieties these days: the mainline grocery stores like Dillons, Hy-Vee and Price Choppers, and more specialty grocers like Whole Foods and Trader Joe’s. Importantly, independent versions of those last ones exist, and those have been growing fairly quickly in some markets.

The potential project also is noteworthy for another reason. It seemingly would put on hold the idea of constructing a conference center and hotel at the site. The Simons family had been partnering with a group that included Lawrence businessmen Mike Treanor and Doug Compton on that idea. The real estate option for Treanor and Compton to buy that site, though, expired quite some time ago. Since then, the property has been on the market.

Now, it looks like it is attracting interest from a group with a much different strategy. Simons confirmed that his understanding of the preliminary idea is that the existing building wouldn’t be razed. Instead, the project would reuse much of the building. It sounds like a grocery store would be only part of the idea. Other uses also would occupy the building. So, the idea that this gateway to downtown might house a seven- to 10-story building seems a little less likely at the moment.

Clearly, a lot of details are not being disclosed right now. That’s understandable given that the project is still in a concept stage. New ideas certainly could emerge that change the whole project. Simons said he didn’t have a timeline for when a sale of the property might be completed. He indicated that the development group has begun discussions with City Hall officials.

“I think they have to get through their negotiations with the city, and that is one of contingencies in the contract,” Simons said.

Thus far, the development group hasn’t filed a formal set of development plans with City Hall. I’m not sure what approvals would be needed by city officials. The zoning likely already is in place for any such project. But it is easy to see how parking would become an issue. Downtown zoning doesn’t require a business to provide off-street parking, but a grocery store likely would want to offer it. The Simons family does own part of the parking lot on the east side of New Hampshire Street, directly across the street from the project, and a small, city-owned parking lot is just to the north of the former Journal-World building.

It also will be worth watching whether talk of this project spurs development at the former Borders location at Seventh and New Hampshire streets. A group led by Treanor and Compton own that building. It has wanted to build a multistory apartment building with a grocery store on the ground floor. But that project hasn’t materialized. It has been slow enough to develop that the group has put the building up for sale. The nearly 21,000 square-foot building and private parking lot are listed on commercial real estate sites for sale at $4.5 million.