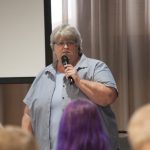 Lawrence Mayor Lisa Larsen introduces the candidates for city manager at a public meeting on Sunday, April 7, 2019 at the Carnegie Building.

One of the things I hope to do more of over the next year or so is have face-to-face conversations with more community leaders. While sitting across from my face is a lot to ask of someone, I’m hopeful to do such interviews with community leaders on a semi-regular basis. I’ll call it a “Conversation With …” and it will become a new addition to the Town Talk lineup.

So, first up, a Conversation With Lawrence Mayor Lisa Larsen. Here are some highlights from our recent conversation that touched on topics about how the city and the county work together, the search for a new fire chief and the growth of downtown. 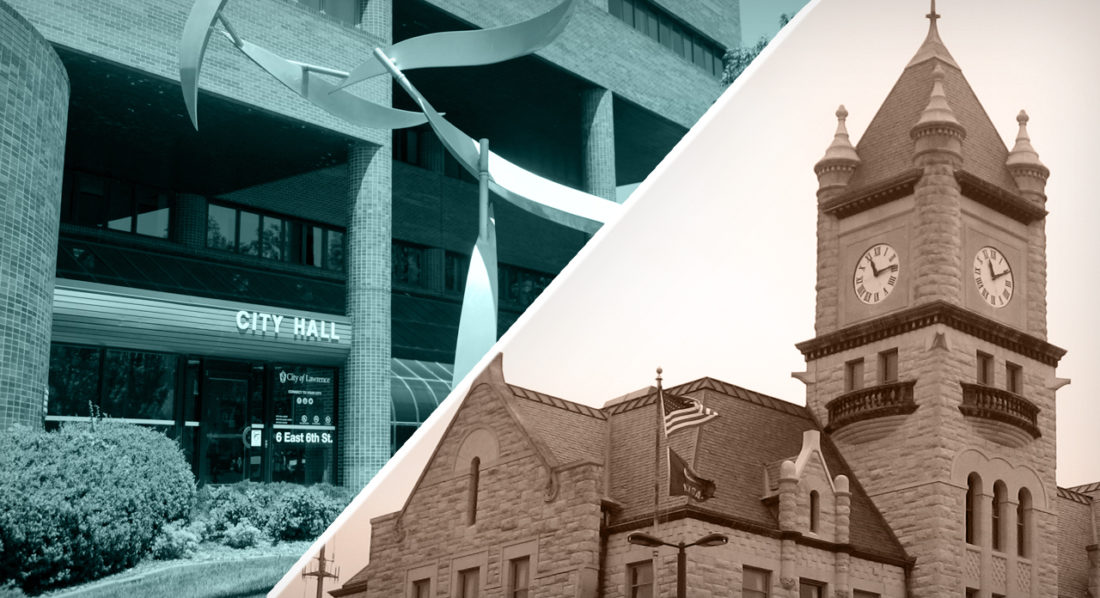 If you remember, several months ago the Lawrence City Commission did broach the idea of a unified government. The city wasn’t proposing such a structure, but rather wanted to have KU experts produce a study outlining some of the pros and cons on the issue.

The county pushed back fairly strongly, saying the idea wasn’t very feasible politically. The county pushed back so much that the study never was done. The thinking was that rural residents would never support the idea of the Douglas County Commission being replaced by a new governing body that also would oversee Lawrence. The rural residents would always live in the shadow, many would fear.

Those are valid concerns, but Larsen told me she is worried that the communities will be missing out on some real opportunities if the issue is never talked about again. The key to having some productive conversations is to perhaps think smaller.

Larsen’s best guess was that most residents wouldn’t object to that type of cooperation.

“I would think any citizen would want to have their governments continue to look for efficiencies,” Larsen said.

She said some of those administrative functions would be good places to consider for consolidation. After all, is overseeing the computer systems at City Hall really that much different than overseeing them at the Douglas County Courthouse? Such consolidation doesn’t require a new governing body. It simply requires a good, functional agreement between the city and the county.

It doesn’t appear the city and the county are close to any such consolidation strategy. But Larsen is open to it.

“Those type of things might be really good to look at from an efficiency purpose,” Larsen said. “I appreciate the folks out in the unincorporated areas. Those are valid concerns and they need to continue to engage to make sure they are being heard. I don’t want us to totally drop the process without taking a look at whether there are some efficiencies that can be found.” 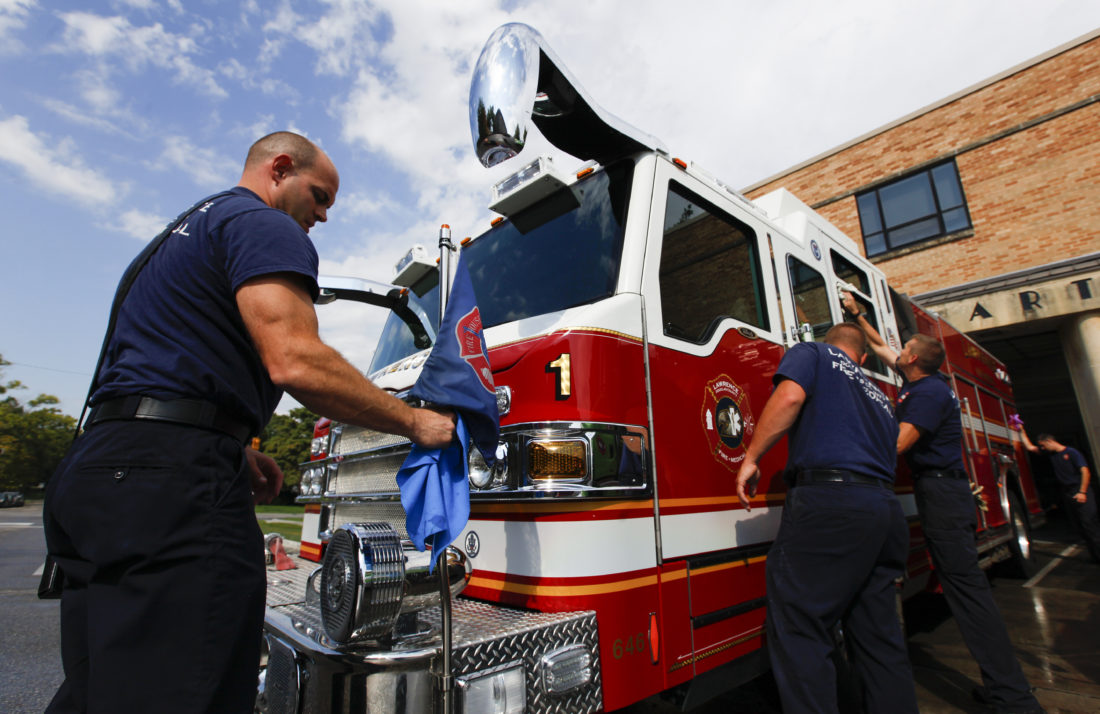 One of the reasons that more talk of consolidation/cooperation isn’t happening might be that tensions have been high over some of the existing cooperation agreements between the city and the county.

Those tensions were on display recently when the city announced it was moving ahead with the process to hire a new chief for the Lawrence-Douglas County Fire Medical department. County commissioners felt that the county wasn’t getting much say in that process, despite the fact the county pays for close to 30 percent of the department’s expenses.

• March 13 — Douglas County leaders: ‘Desire is there’ to work with City of Lawrence on Fire Medical chief hire

• March 6 — Douglas County Commission: City of Lawrence plan to hire Fire Medical chief is not in ‘spirit of cooperation’

Certainly, I’ve heard from members of the public — both inside and outside the city — who believe the county deserves more input into the hiring process, although it is clear that ultimately the hire will be made by the Lawrence city manager. But the new chief will be responsible for a vital county service — ambulance service. The county is in the best position to outline the challenges that come with providing a service to a rural area, and the next chief needs to be aware of those.

Larsen stopped short of saying the city had erred in the process. But she did say the process has evolved after the county made its concerns known.

“I have always felt all along that is an administrative decision, and that is what we both hire our managers for,” Larsen said. “What has come of that is they both sat down and have worked out a situation they both apparently are comfortable with.”

Larsen said that agreement, to her understanding, involves interim County Administrator Sarah Plinsky being added to a group that will take each chief finalist on a tour of the county. That tour will include stops in the other cities outside of Lawrence, and also will give Plinsky a chance to get a better understanding of each finalist.

“She will be able to ask direct questions that hopefully will answer their needs,” Larsen said.

Larsen said the expectation is that outgoing City Manager Tom Markus will be making the hiring decision — not Markus’ replacement, whom the city is in the process of hiring. In addition, Markus is expected to lead the negotiations on a new employment agreement between the city and the firefighters union. Larsen expects that new agreement to be reached before a new city manager takes the reins.

“That’s one of the things we have tasked Tom to do,” she said.

That should ensure that Markus’ tenure will be eventful until the very end. The negotiations with police were protracted and involved tough back-and-forth. I think the fire negotiations will be tough as well. 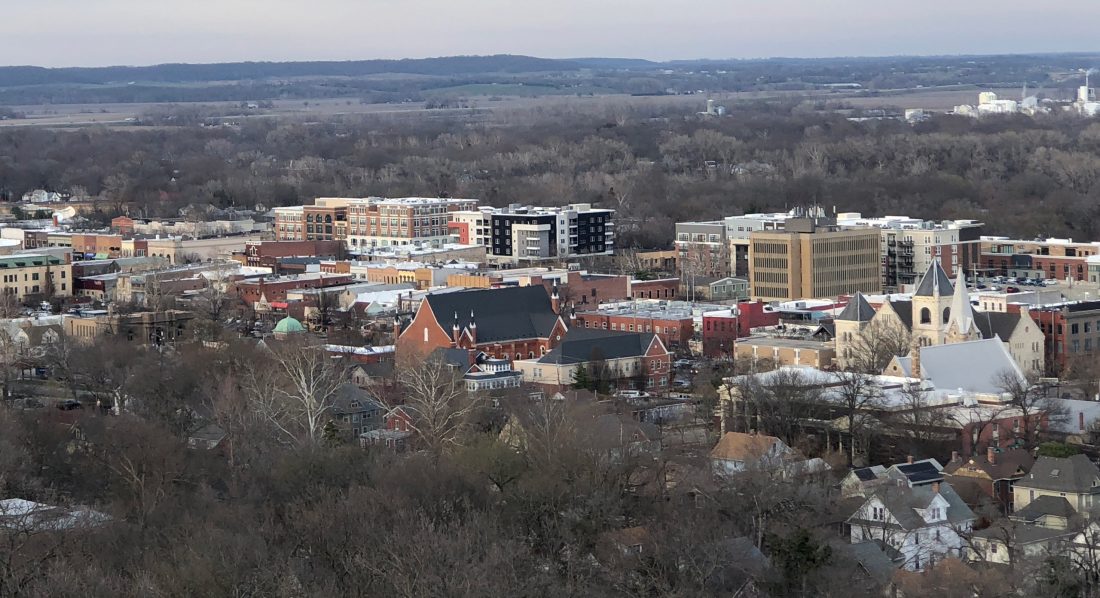 The 700 through 900 blocks of downtown Lawrence are pictured along with the surrounding tree-covered neighborhoods, April 3, 2019.

When I asked Larsen what else she is hoping to spend time on before her term as mayor ends in January (her term on the commission lasts longer, but mayoral terms are only a year), she talked about the downtown master plan. She talked about how she wants to make it a process that is easy for residents to participate in and very transparent for all to see.

“Citizens have let us know loud and clear that they want to be part of the process,” Larsen said. “They really value the downtown.”

But a particularly interesting part of the conversation was about how downtown may end up growing. I mentioned that it may be hard for downtown’s footprint to grow much because that would involve encroaching on existing neighborhoods. One of the potential solutions always has been to allow redevelopment of the city-owned surface parking lots. That would probably involve some public-private partnership that would produce new buildings and new types of parking. Larsen didn’t shy away from that idea.

“I’m open to any ideas if they help us address sustainability and density,” Larsen said of two topics the City Commission has advocated for. “If that involves parking garages even, that is fine.”

Larsen said she recognizes the future of the surface parking lots can be an important element in downtown’s future.

“They are very valuable pieces of property, and they aren’t being heavily utilized when they are just a surface parking lot. Yes, you need parking, don’t get me wrong. But I think we can put those properties to much better use than what we’ve got.”

It will be interesting to watch downtown issues that come before the commission. A desire for density and sustainability will cause downtown to look different, probably including taller and larger buildings. The comfort level with downtown becoming more dominated by bigger buildings is mixed in the community, it seems. The City Commission will play a big role in picking the path forward.

As for what’s next, I do hope that Douglas County Commission Chair Michelle Derusseau will be the next leader to be part of the “Conversation With” series, as it will be important to hear the county’s views on some of these same issues and some others.

Also, I will report a bit more on my conversation with Larsen. We spent a good amount of time talking about the city’s recent decision to lower the fine to $1 for certain types of marijuana possession offenses. I’ll be reporting on that part of the interview as part of a series we are doing on the marijuana issue.

In the meantime, I’ll be making my list of other community leaders to talk with, and better preparing my face for a face-to-face interview. Where did I put that sandpaper?