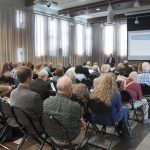 City manager candidate Craig Owens speaks to members of the Lawrence community at a public meeting on Sunday, April 7, 2019 at the Carnegie Building. Sherman is currently the city manager for the city of Clayton, Mo.

In their first meeting with the public, the two finalists for Lawrence city manager were greeted with a full crowd and a variety of questions, ranging in topic from economic incentives to the city’s role in arts and culture.

About 150 people filled the meeting room at the Carnegie Building on Sunday for the event, where city manager finalists Susan Sherman and Craig Owens gave presentations that included their plans for the first 100 days in Lawrence. After their presentations, each finalist answered questions from the public for 30 minutes.

Lawrence resident Paul DeGeorge, who co-owns Wonder Fair, said he thought some people are frustrated with how development incentives have been used, and asked both finalists how they would approach economic development to ensure that both the opportunities and the benefits are distributed more equally.

Owens, who is currently city manager of Clayton, Mo., said that such agreements need to be well vetted and examined to begin with to ensure the incentives are needed. He also said that apart from increased tax collection, he is open to nontraditional returns on the city’s investment when it benefits the community. He said the community and elected officials could define those things and that sometimes such benefits have more value for the city than cost to the developer. 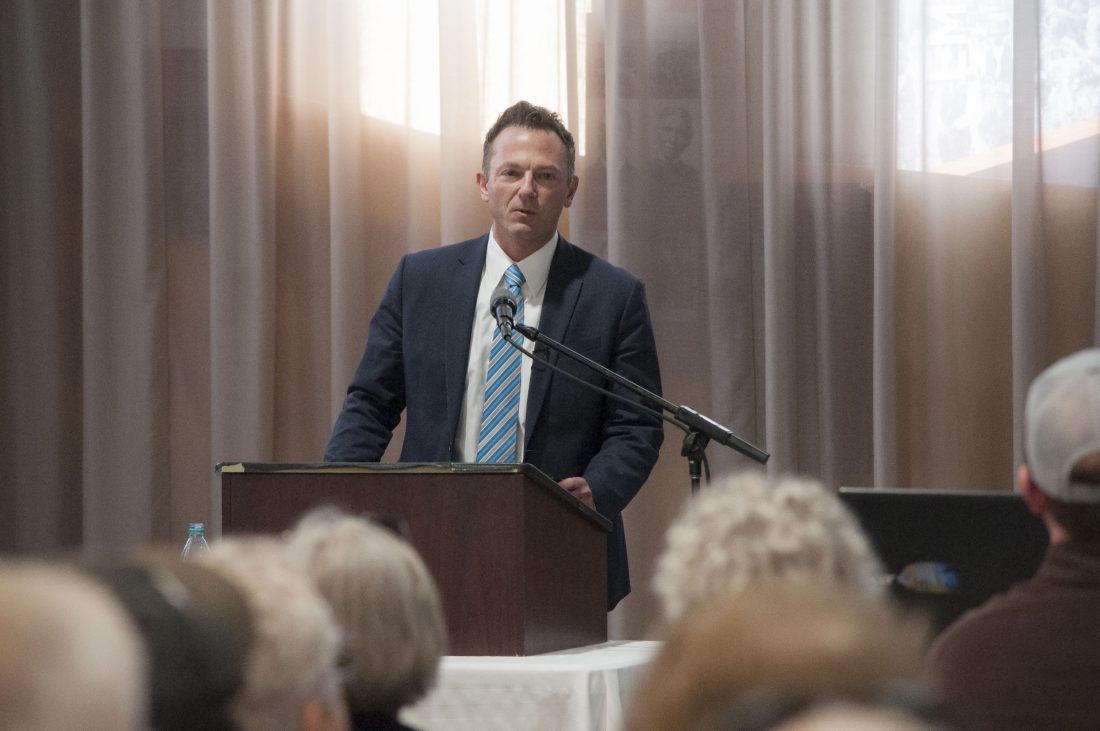 “Whether they’re (providing) dedication of land or dedication of amenities or they build something that we weren’t going to be able to do, or it has some kind of other value,” Owens said. “We are unique in that we are going to be here 100 years from now, and we have a long horizon as a community and as a city. Sometimes the developers don’t get that.”

Sherman, who is currently the assistant city manager of Olathe, said that every community has their own approach to make sure they have a balanced tax base, and that city managers follow the lead of elected leaders. She said although Olathe works with the chamber of commerce as Lawrence does, that each city council’s goals and philosophy regarding incentives will be different.

“It’s just a philosophy, and it’s their philosophy and their targets they’re going for,” Sherman said. “The economic development corporation and our city management and our staff follow that lead.” 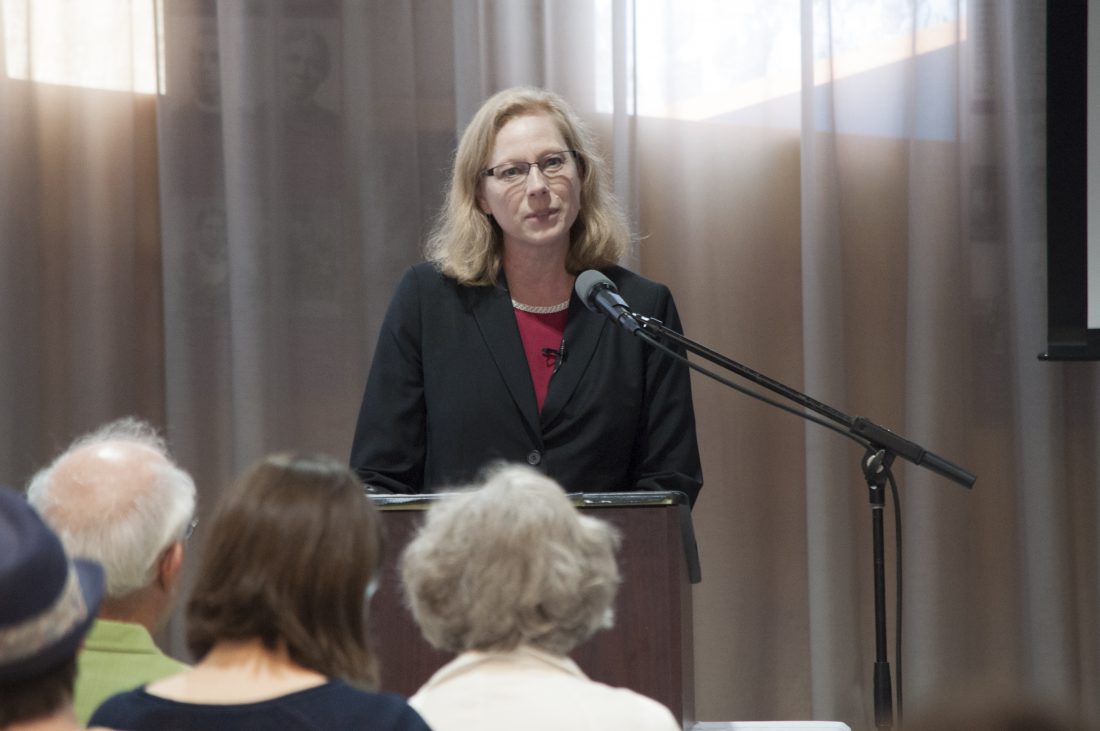 City manager candidate Susan Sherman speaks to members of the Lawrence community at a public meeting on Sunday, April 7, 2019 at the Carnegie Building. Sherman is the assistant city manager for the city of Olathe.

Lawrence resident Candice Davis, who formerly chaired the Lawrence Association of Neighborhoods, asked Owens how he would integrate his current experience working in a wealthy St. Louis suburb with the economic and cultural diversity in Lawrence.

Owens said that although Clayton does have a high per capita income, he has other experiences. He noted he previously worked in the working-class city of Hazelwood, Mo., and served as a volunteer at St. Louis-area nonprofit Beyond Housing, which deals with affordable housing and other community issues. He said that was a very intentional choice and he felt like his career has led him to Lawrence.

“It is an ambition of mine that everybody gets to feel like they’re at home and everybody gets great services. It doesn’t matter where they are on the economic ladder,” Owens said. “So it’s one of the attractions of this job, because I do believe there is a tremendous diversity here in a lot of ways.”

Lawrence resident KT Walsh, who is vice president of the East Lawrence Neighborhood Association, touched on a similar theme as Davis in a question to Sherman. Walsh said there are equity issues when it comes to providing parks and recreation facilities for low-income kids on the east side and asked Sherman how she addressed such issues in Olathe.

Sherman noted that Olathe is 11 percent Hispanic and that many of the schools provide free and reduced-priced lunches, so she has familiarity with some of those issues. She said Olathe offers scholarships and has partnered with the school district on some programs. She said she thinks parks and recreation should be available to everyone.

“I think you want full access to be able to have every child that wants to play baseball, or T-ball or swim in the pool,” Sherman said. “We have to come together to figure out how to make that happen for those kids.”

Lawrence Arts Center CEO Margaret Weisbrod Morris asked both finalists what they saw as the role of arts and culture in a city and what was the city government’s relationship to that role.

Owens said he thought it was important that space be carved out for art, artists and culture in Lawrence. Although he said elected officials make those determinations, he said he saw art as the essence of the community.

“But these again are value determinations that the elected officials need to make,” Owens said. “Yes, there’s budgetary implications and there’s policy implications, but it doesn’t seem like that’s going to go away here. I think it’s something that’s precious and unique about Lawrence.”

Sherman said she thought the arts are a very important part of local government, and although she doesn’t think government is the only funder of the arts, she definitely believes it is a partner and an integral part.

“Absolutely I think local government has a role in partnering with the arts community and making sure that’s a rich part of who your community is,” Sherman said. 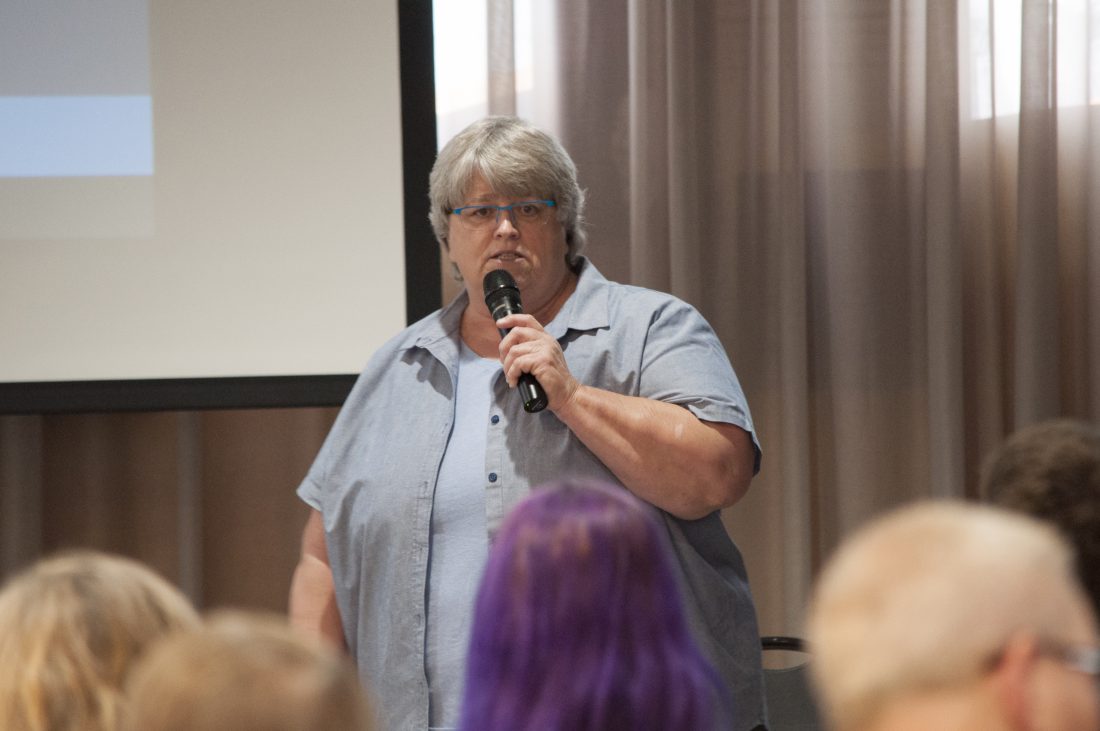 Lawrence Mayor Lisa Larsen introduces the candidates for city manager at a public meeting on Sunday, April 7, 2019 at the Carnegie Building.

After receiving 24 applications to the position of city manager, the city announced the two finalists March 27. Both Sherman and Owens are graduates of the University of Kansas Master of Public Administration program and are International City/County Management Association Credentialed Managers.

Before the question and answer session, the finalists also spoke about themselves and outlined what they planned to do in their first 100 days if selected as city manager.

Owens said he would spend his first 30 days immersing himself the community. He said that would include spending time in each city department, meeting with small groups of city staff, and other activities such as sleeping in a fire station and going on a ride-along with police. He said the next phase would be spent talking to additional constituents and assessing city operations, which may or may not lead to adjustments. He said he would publicly report his observations after the first 100 days.

Sherman broke her first 100 days into three phases of approximately 30 days each. She said to begin with, she would be out and about and as accessible as she could be to develop relationships and build trust with the community. From day 31 to 60, she said she would work to understand the city’s priorities, such as the current plans, projects and budget. Lastly, she said she would begin to ask questions to look for potential ways to improve processes and performance.

Following the event, attendees were able to provide written feedback on each finalist. A video of the event will also be available on the city’s website, lawrenceks.org, and feedback can be submitted via email to Lawrence@ralphandersen.com.

Mayor Lisa Larsen told attendees that the finalists will meet with city officials on Monday and then each candidate will have a second interview with the commission for about 1 1/2 hours each.