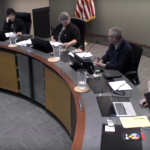 Lawrence city leaders are moving forward with changes that would decrease the city’s fine for possessing small amounts of marijuana to $1.

As part of its meeting Tuesday, the Lawrence City Commission voted 4-1, with Commissioner Stuart Boley opposed, to amend the city ordinance that lays out the penalties for first and second convictions for marijuana possession. The changes apply to people 18 and over who are convicted of possessing 32 grams or less of marijuana.

“From where I sit, this is our City Commission sending a message to the state that on our local level, we perceive this as taking as little action as we possibly can in a criminal justice system for this behavior,” Herbert said. “And hope that that message resonates with them.”

Changes to marijuana possession penalties made by the commission can only apply to first and second convictions because third offenses are felonies under state law and therefore cannot be processed in municipal court, which only handles misdemeanors. That fact caused some concern for Boley, who was in favor of a $1 fine for the first offense, but voted against the changes because he wanted the fine for the second offense to be significantly more due the severity of the state law.

Boley said the fines set by the city need to send a message that the penalty increases, so people won’t be caught unaware that they could be facing a felony.

Six people spoke during public comment about the proposed changes, all in favor of lowering the penalties for marijuana possession and some also asking the commission to look at related fines for drug paraphernalia possession. Only one commenter said he opposed lowering the fines, saying that the changes were meant to get as close to legalizing marijuana as possible and that could have negative health and safety effects, particularly on children.

Mayor Lisa Larsen said she didn’t see the commission’s action as legalizing marijuana, and noted that those caught in possession of marijuana will still be charged and that the charge would still be on their record. Larsen, who previously noted the disproportionate arrest rates for marijuana possession for people of color, said that for her the changes were about justice.

“So this is not legalizing marijuana,” Larsen said. “What I want to do with this is to bring some reasonable and equitable justice to this; that’s what this is about for me.”

Currently, those found in possession of marijuana could have to pay around $400 in fines and other charges to the city and potentially hundreds more if they are also charged with possessing drug paraphernalia, such as a pipe or other device.

Specifically, people charged with possession of both marijuana and drug paraphernalia currently pay a minimum $200 fine for possession, a minimum $200 fine for paraphernalia, up to $150 for a drug evaluation and $63 in court costs. If the person receives a diversion, they will pay an additional $130 for diversion and potentially more if the company that does the drug evaluation recommends substance abuse treatment, which can call for weekly meetings.

Under the new ordinance, which was adopted on first reading as part of Tuesday’s meeting, those convicted of marijuana possession in municipal court will pay a $1 fine and $63 for court costs, and potentially more in some circumstances. The changes to the ordinance do not affect costs for paraphernalia possession and diversion, but some commissioners have said they are interested in looking at those parts of city code as well.

• In other business, the commission voted unanimously to amend the 2019 budget to include $250,000 for a citywide traffic signal coordination and timing study that aims to improve travel in the city. The study will identify changes that could be made immediately to improve coordination and timing among stoplights and develop a long-term program for infrastructure and equipment improvements.