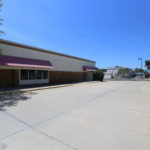 Plans have been filed to convert the former post office building at 1519 W. 23rd St. into a dog day care business.

In the battle between dogs and postal workers, chalk up a victory for the canines. Plans have been filed for a former Lawrence post office building to be converted into a resort for dogs.

Woof’s Play Stay Grooming has filed plans with City Hall to move into the building at 1519 W. 23rd St. Some of you may have forgotten that the building once was one of Lawrence’s two post offices. It closed in the mid-1990s when the new post office was built on 31st Street, and the building later became a home for Half-Price Books. But the building has been largely vacant for several years.

The dog resort plans some significant renovation work for the property, according to a site plan filed with the city. I’ve got a call into the company, but haven’t yet heard back from the owner. But the company operates a pair of facilities in Johnson County, and the website gives an idea of the services it offers.

The company offers traditional overnight boarding services, but a selling point is the amount of time the dogs get to be outside. The website says dogs get nine hours per day in the “DayPlay” area, which is a combination indoor and outdoor space.

Plans filed with the city show that a large part of the rear parking lot of the 23rd Street building would be converted into an outdoor play area, complete with a dog pool, artificial dog turf, an eight-foot vinyl fence and several trees (which may be multifunctional in this setting.)

But the website also touts something unique inside. For an extra fee, a dog can get a “penthouse” suite. In addition to being a larger, more private space, it also comes with rubber floors and a padded bed. But perhaps most importantly, the suites also have a TV and DVD player, according to the website. (Most popular DVD? “When Mailmen Flee.”) The suites also include a private webcam so owners can check on their dogs remotely. Boarding rates look to range from about $45 to $55 a night, according to the website.

The business – which the website says opened in 2008 — also offers a day care service for those dogs that don’t need an overnight stay. They get full access to the DayPlay area, and staff members monitor the animals and keep them separated based on age, size, temperament and other factors, according to the website. Rates look like they start at about $25 for a full day.

The company also offers a variety of grooming services, including baths, hair cuts, nail trims, teeth brushing, ear cleanings and several other treatments. Plus, they offer “spa packages” that include several of the treatments. Packages range from about $25 to more than $90.

No word yet on when the business may open. The property has the necessary zoning in place to host an animal facility, but the significant remodeling of the parking lot and other area requires site plan approval from Lawrence planning officials.

• A running water hose in the yard is good day care for my dog. It’s not such good night care for me, though, as I have to get up approximately 18 times to let him out. (If I also play in the hose, the number of trips is even greater. ) I bring this up because several readers have been asking about a running hose they’ve seen in recent weeks.

Several readers have asked about a large amount of city water that is being pumped through a hose into a storm sewer at the Jayhawk Club, which is the former Alvamar Golf and Country Club.

The activity at the club, which is owned by a group led by Lawrence businessman Thomas Fritzel, has sparked concern that something illegal is going on with the water situation. The city did open a previous case about improper water use at the club, and Fritzel is facing legal problems on other fronts.

However, I had City Hall reporter Rochelle Valverde check on the situation. The city is aware of the water use at the club, which had been underway for several weeks. Indeed, it appeared the water was being used to recharge the club’s irrigation system. But the city said the club had received city permission, and the appropriate type of water meter had been installed to measure and accurately charge the club for the water usage. It is not illegal to use city water to fill an irrigation pond, for example, as long as the proper permissions have been granted and the proper fees are paid.