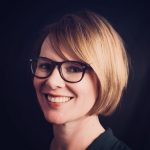 In officially launching her campaign for a seat in Congress, Democrat and Lawrence resident Abbie Hodgson told the Journal-World that if she was elected she would work to help secure financial stability for Kansans through several policy platforms.

“From a national perspective, the economy is booming,” she said. “Yet if you walk down most Kansas main streets or you talk to Kansans and ask them about how they feel about what’s in their checking accounts, they are going to tell you they don’t feel very good about the economy and are not optimistic about the future.”

In a Tuesday news release, Hodgson, 37, announced her candidacy in the 2020 election for Kansas’ 2nd Congressional District, which represents a large portion of the eastern part of the state and includes Lawrence, Topeka and Pittsburg. U.S. Rep. Steve Watkins, a Republican from Topeka, currently holds the seat. Reports of Hodgson’s planned candidacy first appeared on Monday.

Hodgson, who grew up in Manhattan and later attended the University of Kansas, said her campaign would focus on the financial security of Kansans, health care, agriculture and trade policy.

Regarding financial security, Hodgson said her No. 1 issue would be to find ways to make health care more affordable, including reducing the cost of health insurance and prescription drugs.

“Any health care policy that is brought forward in the House of Representatives would need to be focused on reducing costs,” she said. “That would be a significant factor for me so that Kansans can have access to health care. For many people this is a life or death issue.”

As for trade and agriculture, she said Republican President Donald Trump’s policies on trade were hurting Kansans. She specifically mentioned the current tariffs on Chinese goods, which have resulted in China cutting off importing soybeans from Kansas.

Noting that she is the descendant of five generations of farmers, Hodgson said plenty of uncertainty already existed with farming, and U.S. policy should not make it harder for farmers.

“We need to create certainty for them so they can plan ahead and ultimately provide for their families,” she said. “You can’t control the weather, whether or not you can get into the fields to harvest when you need to or the price (of crops). But Trump can control whether there is a market for the product, and that needs to be addressed sooner rather than later.”

She also mentioned affordable child care and livable wages as policies she would support.

Although Hodgson is the only 2nd District candidate to announce her candidacy so far, Watkins is expected to run for reelection. He was first elected in 2018 by narrowly defeating Lawrence Democrat Paul Davis.

When asked why she thought she could defeat Watkins in the general election, Hodgson said she had met Kansans who were disappointed in their representation in Congress.

“He has been just a rubber stamp to the policies of the Republican Party and not stood up and fought for (Kansans) on many of the issues I spoke about,” she said. “He has not stood up to the president on the tariffs. He is not fighting for health care … He’s not concerned about the everyday Kansas families and how hard they are struggling to get ahead.”

Hodgson was a speech writer for former Democratic Gov. Kathleen Sebelius and served as the chief of staff for the House minority leader in the Kansas Legislature. She also earned a bachelor’s degree and a doctorate from KU and served as a faculty member for the Department of Communication Studies for several years.

She currently works for the nonprofit organization Pew Charitable Trusts, focusing on ending predatory practices by payday lenders and increasing access to dental care. She said she would step down from the position at the end of the month to focus on her campaign.