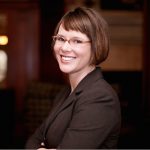 Topeka — A one-time speechwriter for former Gov. Kathleen Sebelius says she will begin a campaign on Tuesday for an eastern Kansas congressional seat.

The 37-year-old Hodgson is a former Kansas House Democratic staff member who has spent the past two years working in Washington, D.C., for Pew Charitable Trusts. She has moved back to Kansas and says she will step down from her position with Pew’s State Strategy Group.

Hodgson in 2017 criticized the treatment of women in the Statehouse and revealed that lawmakers relied on underage interns as designated drivers following lobbyist-hosted cocktail hours. Her disclosures were among the events that spurred efforts to reform the Legislature’s sexual harassment policies.

Hodgson, who grew up in Manhattan, said her campaign will focus on health care, agriculture, trade policy and the financial well-being of Kansans.

“When I talk to voters when I walk down Kansas main streets you don’t get that sense of optimism from people,” she said. “They don’t feel like they have enough money in their savings accounts to weather a crisis.”

The 2nd District has not elected a Democrat since 2006 and is not currently considered a 2020 target for the Democratic Congressional Campaign Committee.

Hodgson said she has met with EMILY’s List, a national group dedicated to electing Democratic women. The organization hasn’t made an endorsement, but spokesman Benjamin Ray said the group is “excited to see a strong candidate like Abbie Hodgson step up.”