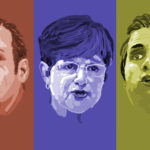 After eight years of conservative government under Govs. Sam Brownback and Jeff Colyer, voters in Kansas have some starkly contrasting choices about which direction they’d like to go.

Democratic candidate Laura Kelly, a state senator from Topeka, is vowing to put K-12 education at the top of her list, along with restoring funding for other state programs that saw significant budget cuts during the Brownback years.

Republican Kris Kobach, the current secretary of state, says he’ll continue along the conservative path. He’s promised a new round of tax cuts, coupled with shrinking the size of state government and cracking down on illegal immigration.

And then, there is independent candidate Greg Orman, who is considered a long shot to win. If elected, he has promised to govern from outside the traditional two-party system, focusing on economic development, job creation and government transparency as the best ways to provide for the state’s long-term future.

The election comes at a critical time for the state of Kansas. The next governor, along with the next Legislature, will play a key role in deciding the direction Kansas takes on a number of key issues, including health care, transportation, gun policy and public school funding, to name a few.

The school finance plan that lawmakers passed in 2018 still fell short of the Kansas Supreme Court’s standard for adequate funding. Lawmakers and the next governor will still need to address that early in the 2019 session.

In 2017, Kansas lawmakers passed a bill to expand Medicaid under the Affordable Care Act, a measure that would have extended health coverage to an estimated 150,000 additional people. But the House was unable to override Brownback’s veto of that bill. It remains a top priority for many in the Legislature, but voters will have to decide whether the next governor will support or oppose such a measure.

Kelly, 68, is serving her fourth term in the Senate. During the 2017 and 2018 sessions, she was part of the bipartisan coalition that overturned many of Brownback’s tax policies and pushed through a school funding plan that is scheduled to phase in more than $500 million a year in new K-12 education funding over the next five years.

On gun policy, she was an original supporter of a 2015 law known as “constitutional carry” that allows people to carry concealed firearms without any required training or a permit. But she now says that law went too far, and she favors tightening the state’s gun laws and repealing a law requiring public colleges and universities to allow concealed carry on their campuses.

Kelly also favors expanding the state’s Medicaid program, known as KanCare, as allowed under the Affordable Care Act. She has consistently opposed enacting restrictions on women’s access to abortion.

Kobach, 52, who now lives near Lecompton, is widely known nationally for his strong opposition to illegal immigration and his strong support for Second Amendment rights.

He was the principal author of a 2011 state law, recently overturned by a federal court, that required new voters to show documentary proof of U.S. citizenship before they could register. He also championed passage of another law that requires all voters to show photo ID at the polls.

A strong ally of President Donald Trump, Kobach has said he would push for other measures to make it harder for undocumented immigrants to remain in Kansas, such as banning so-called “sanctuary” cities and counties and repealing a state law that allows students from Kansas to pay in-state tuition at public colleges and universities regardless of their citizenship status.

He has also called for significant state tax cuts, as well as caps on local property valuation increases, and he has said he would balance the budget by reducing the size of state government through attrition.

On education, Kobach has said that if he had been governor in 2018, he would not have signed the five-year, $500 million school funding plan that lawmakers passed. Going forward, however, Kobach has not specifically called for cutting K-12 education funding, but he has been critical of how much schools spend on administration, and he has said he wants to see a greater share of the total education budget going directly to instructional costs.

Kobach opposes expanding Medicaid and is a strong supporter of expansive gun rights, as illustrated by his fondness for riding in parades in a red, white and blue Jeep with a replica large-caliber machine gun mounted on top.

Kobach’s lieutenant governor running mate is Wichita businessman Willis “Wink” Hartman, who was a candidate for the GOP nomination himself before he dropped out of the race in March to join the Kobach campaign.

Orman, 49, is a Johnson County businessman who ran as an independent candidate for the U.S. Senate in 2014 against incumbent Republican Sen. Pat Roberts.

Orman has made economic development the centerpiece of his campaign. Toward that end, he has proposed trying to expand the state’s workforce by establishing a revolving loan fund that would make it easier for high school graduates and military veterans to attend community colleges and technical schools.

Orman also says he favors expanding the state’s Medicaid program. He also opposes putting restrictions on women’s access to abortion services, and he opposes Kobach’s call for cracking down on undocumented immigrants, saying that could be devastating to the state’s agricultural industry.

On his website, Orman has laid out a number of other policy positions. Those include calls for greater transparency in government and easier access to voting, including same-day voter registration.

Orman’s running mate is state Sen. John Doll, of Garden City, a former Republican who changed his voter registration to unaffiliated to run with Orman.