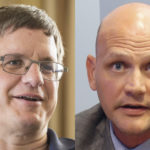 The office of secretary of state used to be considered a low-profile ministerial job. The main functions are to supervise elections, keep track of business and corporate filings and serve as the principal record-keeper of the state.

All that changed in 2010 with the election of Republican Kris Kobach, who reshaped the office into a springboard for advancing a national agenda focusing on illegal immigration, allegations of widespread voting fraud and the passage of strict new voting requirements aimed at addressing those issues.

After two terms in office, Kobach is now running for governor, and the two major-party candidates hoping to take his place have sharply different ideas about how the office should be managed going forward.

Republican Scott Schwab, of Olathe, the current speaker pro tem of the Kansas House of Representatives and a former chairman of the House Elections Committee, shares many of Kobach’s views, including support for laws that Kobach championed requiring new voters to show proof of U.S. citizenship to register, plus photo ID at the polls, as well as a law that moved municipal elections to November of odd-numbered years. He has said his main priority if elected would be to make sure those laws worked as intended.

His challenger is a new face in Kansas politics, Democrat Brian McClendon, a Lawrence native and former tech executive at Google and Uber. He is running on a platform of making it easier for Kansans to register and to vote, securing election-related voting systems from outside hacking, and modernizing the business side of the office to make it easier for people to start new companies in Kansas.

Schwab, 46, has served in the House since 2008. He also served two terms before that, from 2003 through 2006, when he stepped down and made an unsuccessful bid for the 3rd District congressional seat. He works as a sales trainer in the pharmaceutical industry.

McClendon, 54, grew up in Lawrence and graduated from the University of Kansas. Since returning to Kansas in 2016, he has worked as a research professor at KU.