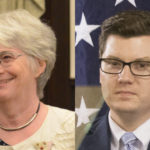 The office of state treasurer is one of the lower-profile elected offices in Kansas state government. Its primary function is to manage the state’s idle fund accounts.

But the office also manages a number of specialized programs such as the unclaimed property division, the state’s Learning Quest college savings plans, and ABLE, a tax-advantaged savings plan that helps people with disabilities and their families save for future living expenses.

The state treasurer is also, by virtue of the office, an automatic member of the Kansas Public Employees Retirement System board of trustees, which oversees the investment and management of money in the state’s pension system.

The last person elected to the office was Republican Ron Estes, who stepped down in 2017 after winning a special election for the 4th District congressional seat. Former Gov. Sam Brownback then appointed Republican state Sen. Jake LaTurner, R-Pittsburg, to the post.

LaTurner is now running for a full term of his own. At age 30, he is the youngest state officer in Kansas.

He faces one of his former Senate colleagues in the general election: Democrat Marci Francisco, of Lawrence.

Born and raised in Galena, LaTurner is a graduate of Pittsburg State University. He has worked in customer relations for a railroad company and was elected to the Senate twice before being appointed to the office of state treasurer.

As treasurer, LaTurner has promoted the unclaimed property program. That’s a program that receives assets from dormant bank accounts, utility deposits, safe deposit box contents and other property, then seeks to return those assets to their owners.

Francisco, 68, has served in the Kansas Senate since 2005. She is currently the ranking Democrat on the Senate Agriculture and Natural Resources Committee.

A former Lawrence city commissioner and mayor, Francisco worked at the University of Kansas in a variety of capacities, beginning with the office of university landscape architect and later as instructor and staff in facilities planning, space management and sustainability. She retired from KU in 2012.

Francisco has said that if she’s elected, she would focus on improving cybersecurity in the treasurer’s office and improving the performance of the Learning Quest and ABLE savings plans.