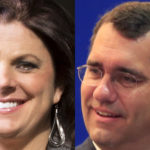 The attorney general is considered to be the state’s chief law enforcement officer, assisting local county and district attorneys in criminal prosecutions. But the office also represents the state in court whenever the state is sued or its laws are challenged as unconstitutional.

The attorney general also enforces the state’s consumer protection laws, directs the Kansas Bureau of Investigation and serves as the state’s chief legal counsel by issuing legal opinions at the request of state and local agencies.

Schmidt, 50, is an attorney from Independence who previously served in the Kansas Senate, including six years as Senate majority leader.

As attorney general, Schmidt’s office has been responsible for defending the state in several high-profile cases, including the ongoing school finance lawsuit and several cases challenging state restrictions on abortion. He has also taken part in multistate lawsuits challenging policies of the Obama administration, including one seeking to overturn the Affordable Care Act, also known as Obamacare.

Swain, 42, is running on a platform of criminal justice reform. She supports decriminalizing marijuana and has vowed to protect consumers against predatory lenders and aggressive debt collection practices.

She also has been a frequent critic of law enforcement agencies, so much so that the Kansas Democratic Party stopped promoting her candidacy and virtually severed all connections with her campaign.