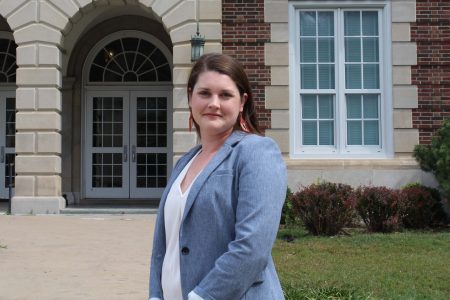 Thea Perry, a candidate for the Lawrence school board election this fall, stands in front of Liberty Memorial Central Middle School on Tuesday, Sept. 17, 2019.

Thea Perry has always been interested in public service, but she was too shy to run for office. That changed, however, when she was diagnosed with breast cancer in January 2018.

Perry, a candidate for the Lawrence school board election this fall, said the health issue motivated her to finally put herself out there.

Editor’s note: The Journal-World has been publishing profiles on candidates for city and school board offices.

“I always say cancer is the best worst-thing to happen to me,” said Perry, who finished her treatment about a year ago and is currently cancer free. “When you face the real possibility that you might not be there to help your kids grow up, it brings everything important into focus and everything else falls away.”

Some of those important issues include improving equity and addressing achievement gaps in the local education system. If elected, Perry said she would want to explore universal preschool in Lawrence as part of the solution. Currently, the school district offers preschool only to certain underprivileged students who qualify.

“Access to universal (preschool) would be a very meaningful step toward closing the achievement gap that exists,” she said, noting that she previously taught as a preschool teacher in Lawrence for about five years.

Perry also has previous experience serving the local school district and advocating for education at the state level. She said while she served on the PTO of her oldest daughter’s elementary school, from 2015 to 2017, she began to notice firsthand how state education funding cuts were affecting schools and students. As a concerned parent, Perry began traveling to Topeka to advocate for increased education funding, she said.

Now, after the Legislature increased funding to levels that the Kansas Supreme Court found acceptable, Perry said she wanted to focus on improving the Lawrence school district.

“I think we’ve made as much progress as we are going to make with education funding in Kansas for the next few years, so now I’m shifting my focus to what I can do on the local level,” she said.

Perry’s pursuit of a seat on the school board is her second campaign for political office since she was diagnosed. She unsuccessfully ran as a Democrat for the Kansas House of Representatives seat that is currently held by Republican Jim Karleskint.

Outside of education, Perry has advocated for other issues, including Medicaid expansion in Kansas. She said the possible expansion could increase health care access for students and teachers. Additionally, she is currently serving as the president of the Lawrence Community Shelter board of directors and is the president-elect of the League of Women Voters of Lawrence-Douglas County.

The central purpose of her advocacy has been to empower others and help them find the tools to be successful, she said.

“Most of the time I’m helping uplift someone else’s voice, and I think that’s what we need more of in our school district,” she said. “We need more leaders to listen.”

Perry is originally from Palmer, a small town in north-central Kansas. She came to Lawrence about 17 years ago to get her bachelor’s degree in biology from the University of Kansas.

Perry and her husband, Jeff, have two daughters, one of whom is in middle school in the district. Her younger daughter is currently attending private school where her “educational needs are being met,” Perry said. She declined to elaborate, citing the privacy of her daughter, but noted that she planned to move her daughter to the Lawrence school district in the future.

Perry is one of five candidates running for the four at-large positions on the Lawrence school board that are up for election. The general election will be Tuesday, Nov. 5. Advance voting will start Wednesday, Oct. 16, and the last day to register to vote is Tuesday, Oct. 15.