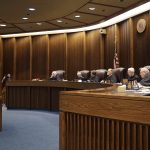 The Kansas Supreme Court ruled Friday that the state’s newest education funding plan is constitutional, seemingly bringing an end to an almost decade-long fight over the adequacy of K-12 funding.

But the justices are refusing to relinquish jurisdiction over the case, allowing it to be brought to the court again if the state does not keep its funding promises.

The new school finance law boosted funding by roughly $90 million a year and was enacted in April with the Legislature’s bipartisan support. The court said that was enough extra funding to satisfy the Kansas Constitution, but it also said it was keeping the underlying lawsuit open.

“The State has substantially complied with our mandate,” the court said in its unsigned opinion, referencing a ruling last year that the state wasn’t spending enough.

The years-long saga began when four school districts sued Kansas in 2010. Before Friday, the court had issued six rulings directing lawmakers to increase the state’s spending in a little more than five years, so that aid to public schools now tops $4 billion a year, which is about $1 billion more than it funded during the 2013-14 school year.

In Lawrence, the ruling received praise from education leaders. Shannon Kimball, a Lawrence school board member, said in an email to the Journal-World that she is looking forward to approving a local budget this summer that is constitutionally funded by the state, which would be the first in her eight years on the board.

“It is long past time for our district, and others across the state, to have the opportunity to begin repairing the damage and lost opportunity costs of over a decade of unconstitutional school funding in Kansas,” she said.

Kimball said she was not surprised the court retained jurisdiction over the case to ensure that the funding promised in the new law — Senate Bill 16 — is actually delivered to the school districts in the coming years. Keeping the case open will make it easier for districts to pursue any complaints that the state has broken its promises, she said, because they would not have to file a new lawsuit and go through a lower-court trial before seeking relief from the state’s highest court.

Lawrence Superintendent Anthony Lewis said in an email to the Journal-World that he was happy with the ruling and the decision to keep the case open.

“The good news for us is that it gives us a road map with which to plan,” Lewis said.

Lewis said the district faces a “fiscal cliff that must now be addressed” because it made decisions while state funding was flat to spend fund balances and contingency reserves.

“We will need to carefully weigh increasing costs and competing interests for the estimated $3.8 million in new funding we anticipate receiving this year,” Lewis said, noting that a district advisory group has been meeting twice a month to review state funding, the district’s current finances, potential budget additions and reductions and reallocations.

The Supreme Court ruled previously that under the Kansas Constitution, the state must spend enough money and distribute the dollars fairly enough to finance a suitable education for every child. In an order last year, the court said a 2018 law promising future spending increases wasn’t sufficient because it did not properly account for inflation.

This year’s law contained Democratic Gov. Laura Kelly’s proposal for an inflation adjustment, which was based on recommendations from the Republican-controlled Kansas State Board of Education. She and other state officials hoped the broad, bipartisan support for the measure would win over the court.

The four school districts that originally sued argued that the state botched what was a straightforward math problem. They contended the solution requires increasingly larger amounts of money each year through the 2022-23 school year. Under their calculations, the increase for that year would be about $360 million instead of the roughly $90 million under Kelly’s proposal.

Kelly, who campaigned on a promise to end the litigation cycle of the case, said in a news release that Friday was “a great day for Kansas and our kids.” She said she would do everything she could as governor to keep the funding in place.

“Funding our schools is about more than money and lawsuits,” she said in the release. “It’s about our kids, their hopes and dreams, and the future of Kansas. Investing in our children’s education is the best investment we can make, and as long as I am Governor, I will continue to fight for our schools and our kids.”

The Legislature’s conservative leaders said they were pleased the court ruled in favor of the new funding plan. However, Senate President Susan Wagle, R-Wichita, said she was disappointed that the court kept the case open.

“The Kansas Legislature must now make sure the additional funding delivers real results for our students,” Wagle said in a news release. “We must improve our graduation rates and ensure that our students are prepared for college, technical school, or the workforce when they graduate.”

Additionally, House Speaker Ron Ryckman Jr., R-Olathe, said in a news release he does not believe the state’s current fiscal situation, along with the education funding law, will allow for a balanced budget in the future.

“No one can show how the state can pay for the plan in today’s decision without cutting $693.7 million from other core services or a massive $693.7 million tax increase,” he said in the release. “Our kids and our schools deserve better than an empty promise.”