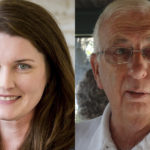 Karleskint, 71, is seeking his second term in the 42nd District seat. Running as a moderate in 2016, he defeated conservative incumbent Connie O’Brien, of Tonganoxie, in the primary and survived against Democrat Kara Reed in the general election. He turned back a tough challenge in the August primary from conservative Lance Neelly.

Karleskint retired as superintendent of the Holton school district in 2010. He has since worked as an education consultant and taught graduate-level classes for Baker University.

The race is a first for the 38-year-old Perry. She said she got involved in education advocacy because of state education budget cuts under Gov. Sam Brownback. Perry said she started attending legislative committee meetings and worked to build coalitions in support of education. Most recently, she has been an outreach director for a nonprofit. She earned a biology degree from the University of Kansas in 2011.

Karleskint said he was seeking re-election to continue the progress the Legislature has made in addressing the financial woes that resulted from the tax cuts he calls the “Brownback experiment.” In 2016, he joined other lawmakers in passing an income tax increase and eliminating tax breaks to limited liability companies. Those measures allowed the Legislature to stop sweeping money out of the Kansas Department of Transportation and restore some funding to that agency and the Kansas Public Employees Retirement System.

The Legislature also passed a new K-12 finance formula last spring that will phase in more than $500 million in additional school funding over a five-year period. The Kansas Supreme Court has ruled that the Legislature must add more money to the K-12 funding formula in the next session. The Legislature will have the money to fund the court’s mandate, Karleskint said.

As a cancer survivor, she decided to run for the House seat when Karleskint voted against a Medicaid expansion bill last spring, Perry said. Karleskint said he did vote against the bill, but he also said it came to the floor vote as a “gut-and-go” bill, where the original contents had been stripped out and replaced with the Medicaid expansion proposal. That was an inappropriate way to pass legislation as meaningful as Medicaid expansion, he said.

Perry said Medicaid expansion could only win House approval through such a procedural maneuver because Republican leadership wouldn’t advance the measure.

Perry questions Karleskint’s moderate label because of his latest Medicaid vote and his stance on LGBTQ rights. Karleskint opposed same-sex marriage and voted in 2018 for the Kansas Adoption Protection Act, which gives legal protection to Kansas faith-based adoption agencies that refuse to place children in certain homes if doing so would violate the agencies’ religious beliefs. Perry said the bill discriminated against the LGBTQ community and is so broad it could allow agencies to refuse to place children in the homes of Jews, Muslims, single parents or people of color.

Karleskint said he does oppose same-sex marriage, but that he voted for the adoption bill to ensure that the agencies providing a third of the state’s adoptions weren’t banned from participating in foster care.