Lawrence Police Department vehicles are pictured during the University of Kansas Homecoming Parade in this file photo from Sept. 27, 2018.

Staffing levels at the Lawrence Police Department have dropped to about where they were 10 years ago, but in the same timeframe, the city’s population has grown significantly.

In addition, rookies make up a growing proportion of LPD’s force, a review by the Journal-World has found. Sworn personnel with about 500 cumulative years of experience have left the department in just the past couple of years.

Though the loss of many experienced veterans is largely attributable to a hiring boom in the early ’90s that is now producing a large number of retirees, there don’t seem to be easy answers about why the number of younger officers quitting the force is accelerating.

Before the department hired 14 new officers in January, the total number of those sworn personnel ranked as officers had dropped below 100, City of Lawrence salary data indicates. That reflects staffing levels even lower than those in 2010, when the department employed 106 officers.

In contrast, U.S. Census data shows that the city’s population had grown by 11.7% between April 2010 and July 2019, the most recent available estimate.

That’s still higher than the average of 0.82 among 29 other cities nationwide that are compared each year in a Benchmark City Survey, but it’s low for Lawrence.

The decrease is consistent with the other benchmark cities in the survey: the 2015 edition shows an average of 1.44 officers per 1,000 residents among all cities, and 1.59 for Lawrence. Staffing numbers were near a 10-year peak in Lawrence that year, but they started to drop off in 2018, city data shows.

However, Lawrence Police Department spokesman Patrick Compton said via email recently that the department has maintained safe levels of officers on patrol by adjusting resources in other areas of the organization. One example that he shared with the Journal-World recently is that the four school resource officers had been shifted back to patrol, with no school in session amid the pandemic.

Currently, the department’s number of officers assigned to patrol fluctuates between 74 and 80, Compton said.

“Anytime we feel as though that number is insufficient, we allocate sworn resources from other departments to patrol or incorporate overtime,” Compton said; he did not provide any overtime cost data in response to a follow-up question.

Asked if there was an ideal citizen-to-officer ratio, Compton said the department is actively looking at staffing models that consider factors other than strictly population, such as calls for service.

The Journal-World reported in May 2018 that a staffing study found that the department’s number of officers on patrol at that time — an average of 82.9 — lagged behind where it should be, at about 87. For comparison purposes, the department’s current patrol levels of 74 to 80 officers is about 8% to 15% below the recommended levels in the 2018 study.

Asked about that study, Compton wrote, “(I)t is challenging to lock ourselves into any one number. This is why we see the value in analyzing multiple sources, such as the one you mentioned. We can, and do, use these studies as a point of reference rather than a deliberate goal or target strength.”

Thirteen recruits are now going through the department’s academy and will be assigned to patrol once they graduate in July, Compton said. 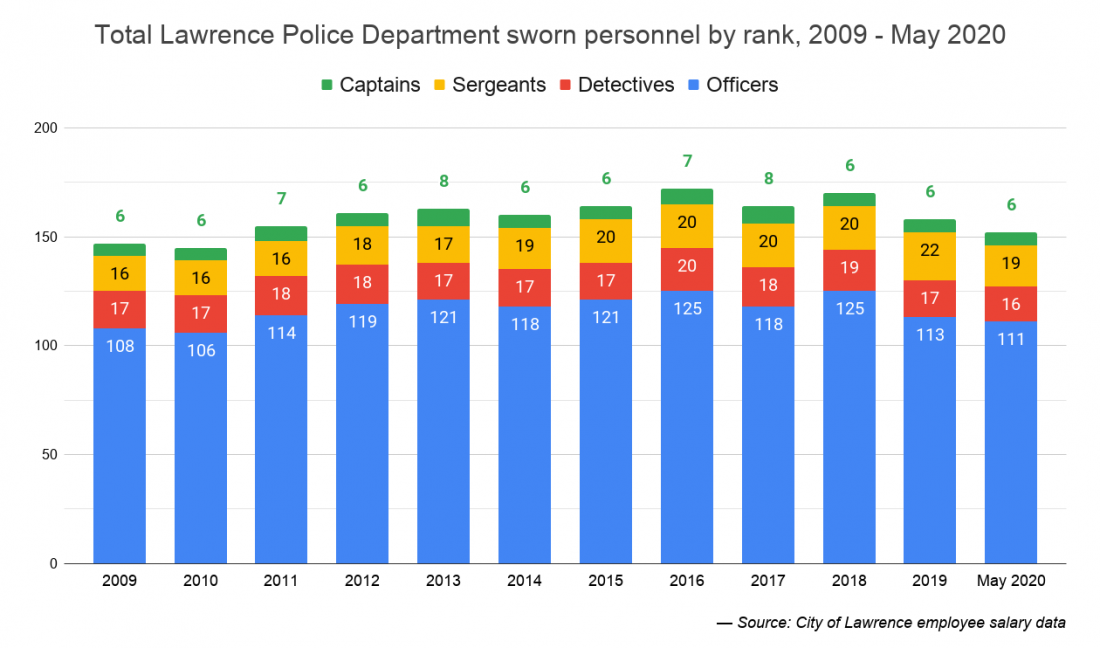 This graphic compiled from data provided by the City of Lawrence depicts the total number of officers, detectives, sergeants and captains employed by the Lawrence Police Department each year from 2009 to 2020 through mid-May. The numbers do not necessarily indicate that all sworn personnel depicted were employed simultaneously, but rather show all sworn individuals who were employed with LPD on at least one day during each year.

The lower-than-normal officer levels come at the same time the department is undertaking a major building project to house its staff. Construction is underway on an approximately $19.5 million police headquarters building in northwest Lawrence. The project — a larger version of which was rejected by voters in a 2014 sales tax election — was slated to be about an $18.5 million project. The reduced staffing levels, though, have helped the city pay for a more extensive project.

The Lawrence City Commission voted in November to spend an additional $1 million to finish out some spaces in the new headquarters, the Journal-World has reported. City staff had recommended using $1.7 million that had been budgeted for police department salaries but wasn’t spent because of vacancies. Compton, however, said the department had not intentionally kept positions vacant to help with the construction budget.

“Overall, your questions seem to allude to a shortage of personnel that could indicate an inadequate number of officers patrolling the City of Lawrence,” Compton said. “We continuously monitor our patrol numbers to ensure we are providing proper service to the community.”

Retention seems to be an issue for the department, though it has seemed to ebb and flow over the past decade, based on the data available to the Journal-World.

Asked if the department tracks turnover, Compton said via email that there is “not an official turnover report” but that the department has averaged 19 separations per year since 2015 due to retirement, resignation or medical reasons.

The turnover in law enforcement is higher than in most career fields, Compton said.

“It’s a dangerous job, and when incidents occur, whether positive or negative, on a national scale, it resonates,” he said. “It can affect public sentiment, and this can also drive officer turnover.”

But the challenges of the job haven’t substantially changed over the past few years, Compton said. Still, officer turnover has accelerated over roughly the last two to three years.

“A positive economy, national sentiment, standard turnover, and the increased hires in 1991 have all factored into officer turnover,” he wrote, when asked to name some factors that LPD believes have contributed.

As noted above, a large number of recent retirements of several of the longest-serving officers, detectives and sergeants is at least in part attributable to a hiring boom after city voters in 1990 approved a .50% sales tax for public safety. Compton said that in the following year, the department hired about three dozen police officers, all of whom became eligible for retirement over the past few years.

“Losing experienced officers, whether it is due to retirement, or a desire to move on, always stings,” Compton said. “However, our hope is that they have transferred some of that knowledge and experience to the younger officers.”

Yet new hires have grown as a percentage of the department’s sworn force — meaning all officers, detectives, sergeants and captains — and a good deal of them aren’t sticking around.

For the years of 2013 through 2015, rookies constituted an average of 8.6% of those ranked as officers and 6.4% of the sworn force, the Journal-World found from city data. From 2018 to present, those numbers are 14.3% and 10.4%, respectively. The department is currently in the process of hiring for its second academy, so the percentage of rookies will likely still increase this year.

Compton said that police work is a demanding career that’s not for everyone, and it’s hard to find quality applicants. He also said that sometimes it takes a few years for people who get into law enforcement to realize that it’s not for them.

“However, the citizens of Lawrence will continue to receive the same level of quality police service they should expect from the LPD.”

In order to return to “target staffing numbers,” Compton said the department has focused on innovative recruiting and running more training academies than in years past.

The department is currently hiring officers, according to a job posting on the city’s website, lawrenceks.org/jobs. Written testing of applicants will begin in June, and the next academy will begin in September, Compton said.

“Lawrence has a very competitive pay plan for police officers, and once they reach a certain level in the department, the retainment numbers go up,” he said.