Report: Lawrence woman who died after February crash did not have headlights on; license of other driver had been revoked 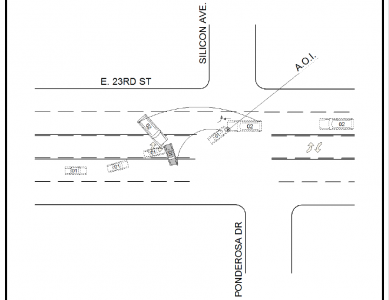 This screenshot of a Lawrence Police Department report shows a diagram of a crash that occurred Feb. 21, 2020, at the intersection of East 23rd Street and Silicon Avenue in Lawrence.

A Lawrence woman who died from injuries she suffered in a February car crash was driving without her headlights on, according to a police report.

The license of the other driver had been revoked after multiple violations, according to the report and court records.

Katherine Bruner, 72, died on Feb. 23 after she had been flown to a Kansas City-area trauma center with critical injuries two days prior, the Journal-World has reported.

Bruner was driving westbound in a Toyota RAV4 on East 23rd Street near its intersection with Silicon Avenue shortly after 7 p.m. on Friday, Feb. 21, according to the report.

A driver heading eastbound in a Ford Mustang attempted to make a left turn onto Silicon Avenue in front of Bruner’s vehicle, and the two crashed head-on, according to the report.

The Mustang’s driver, 39-year-old Andrew Lee Copeland, of Lawrence, told police he did not see Bruner’s SUV because it did not have its headlights on, according to the report; the Lawrence Police Department’s Accident Investigation Unit later determined that to be accurate.

Copeland had been arrested in July 2019 on suspicion of driving while a habitual violator, according to the Douglas County Jail’s booking logs.

Online court records indicate that Copeland had pleaded no contest to a charge of driving while a habitual violator, fourth offense, in August 2019. He had been ordered to serve two days in jail followed by 88 days of house arrest, according to court records. The nature of the previous violations was not immediately clear from available records.

Neither driver showed any signs of impairment, according to the report. Copeland was not injured and did not request emergency medical attention.

Bruner’s obituary, published in the Journal-World on Feb. 26, described her as “an avid world traveler, accomplished gardener, community activist and Democratic party supporter. She was a Girl Scout leader, ski trip chaperone, and excellent photographer and an avid Jayhawk basketball fan.”

“Kathy’s wish to be an organ donor was fulfilled,” the obituary said. “Her other wish was for everyone to vote.”

The police report did not indicate that Copeland had been issued any citations in connection with the crash. Patrick Compton, a spokesman for LPD, confirmed via email Tuesday that no citations had been issued. He said the investigation into the incident was ongoing.

Dorothy Kliem, trial assistant for the Douglas County district attorney’s office, said via email that a review of the office’s records showed that no report had been submitted for review in connection with the crash as of Tuesday.