Lawrence police: Most calls for law enforcement are being dispatched without addresses because of civilians responding 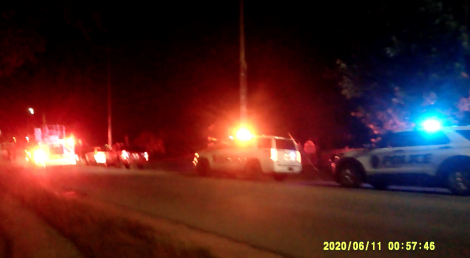 This freeze frame is from video footage, provided to the Journal-World by Lawrence residents Zach Snyder and Michael Eravi, that shows an interaction with Lawrence police and a campus security guard for Haskell Indian Nations University during an incident on June 11, 2020.

Over the past several days, most local law enforcement incidents have been dispatched over the emergency radio without addresses.

Lawrence police say it’s because of some civilians interfering with calls; however, a few members of the public told the Journal-World they take issue with the lack of transparency.

Sgt. Amy Rhoads, public information officer for the Lawrence Police Department, said that on Thursday, law enforcement agencies across the county modified their dispatch protocols. Now, the addresses for lower-priority calls are being sent to officers’ in-car mobile data terminals rather than being transmitted over the air.

The changes come after “several incidents” in which civilians monitoring radio traffic responded to call locations and “either interfered with the responding officers or recorded private individuals who had requested police service,” Rhoads said via email Tuesday.

Emergency calls that are classified as Priority 1 and 2 — which include incidents such as fights, shootings, disturbances with weapons and serious injury accidents — continue to have their addresses broadcast as usual, Rhoads said.

“It is essential that all public safety personnel, as well as others in the community, can hear locations of these types of incidents,” Rhoads said. “Should a minor incident escalate to a more serious situation, additional resources, such as fire/medical units, would also be sent.”

With law enforcement nationwide under a microscope following renewed calls for transparency and accountability after the death of George Floyd in Minneapolis, the change in procedure has upset some area residents.

Even before Floyd’s May 25 death, however, some Lawrence residents had started going out to calls that they heard dispatched on the scanner and recording video as the incidents unfolded. The Journal-World has been in contact with two of them, Zach Snyder and Michael Eravi.

Though Rhoads did not name anyone specific in her email to the Journal-World Tuesday, videos that Snyder and Eravi have shared with the newspaper make it clear that at least some Lawrence police officers and supervisors are aware of the two men and do know them by name.

In a statement to the Journal-World Tuesday evening, Snyder and Eravi said they thought the dispatch changes are “solely about avoiding accountability and hiding their activity.”

“When we respond to police dispatch calls, we maintain a safe distance, stay on public property, and never interfere with an active scene,” they said.

As the Journal-World reported recently, LPD’s policy states that members of the public are allowed to film officers from any public place as long as they do not interfere or present a safety hazard to anyone at the scene of an incident. Members of the department will not prohibit or intentionally interfere with lawful recordings, the policy states. It does not differentiate between types of incidents that can or can’t be recorded.

Snyder and Eravi said they have never been cited for interfering with law enforcement or any other illegal activity, nor have they inserted themselves into a scene — “in fact, it is quite the opposite,” they said.

Rhoads’ response to the Journal-World’s questions on the subject — again, without specifically naming Snyder or Eravi — conflicted with their account.

“When these bystanders insert themselves into the call, an officer is forced to engage the bystander instead of concentrating on the incident and that compromises the safety of everyone involved,” Rhoads said. “The public absolutely has the right to record police interactions occurring in public spaces within their view. This change does not impact that right.”

However, Snyder and Eravi said they believe LPD officers have been instructed to “run interference” and block them from filming.

“Again, this is an issue of accountability and transparency,” they said. “The Lawrence Police Department does not want to be held accountable for their actions and until that attitude changes we will continue to film them to protect the public.”

Without generally responding to calls, some social media users have created pages that feature updates from the scanner, and they have been tracking local police, fire and medical calls for years, in some cases. One of the pages, “Lawrence Ks Community & Police Scanner,” has a Facebook following of nearly 45,000 accounts and about 2,200 on Twitter, @KsScanner.

August Rudisell, a moderator of those pages who worked for just short of three years as a dispatcher for Douglas County, said that although he understands LPD’s stance on airing addresses and that the change is a response to a few individuals, it came at a time when public trust in law enforcement is waning.

Rudisell said that since its inception his page has placed officer safety and scene integrity above the desire to communicate in real time — for instance, he will delay posting calls such as pursuits to give officers a chance to secure the crime scene before it becomes public knowledge.

“We also have never encouraged anyone to use our page as a resource to search out officers and dispatched police calls,” he said via email Tuesday.

He said the page’s desired purpose is to be a community resource so that residents can know what’s happening in their neighborhoods in real time.

“Taking away visibility from the actions of area officers erodes our faith that an agency is conducting their interactions with the public in a safe and professional manner,” Rudisell wrote. “Communicating addresses is an easy way for our community to feel like they are a part of the dialogue on area crime.”

In an effort to help with transparency regarding the number, types and locations of police calls for service, LPD will start posting its 24-hour call logs to its website, Rhoads said.

Those logs, emailed to the Journal-World at 1 p.m. each day, contain the time, date, basic nature of the call as it comes in to dispatch and an approximate location of the call, except for certain incidents, such as reports of sex crimes and domestic violence. They cover a span from 6 a.m. the day prior to 6 a.m. the day they’re released.

Rhoads said the duration of the change in dispatch protocol has yet to be determined. She said the department would have discussions with public safety partners and city and county management staff regularly to determine the need to continue such protocols.

Asked if civilians could access the locations of calls in the moment — for instance, if they didn’t feel safe not knowing the location of a call, or perhaps if they think that a call that sounds dangerous might be something they hear or see happening near them — Rhoads said, “If a citizen is in fear of their safety and/or sees or hears what they believe to be a dangerous situation or a crime occurring, we would encourage them to call the police.”

This video footage, provided to the Journal-World by Lawrence residents Zach Snyder and Michael Eravi, shows an interaction with Lawrence police and a campus security guard for Haskell Indian Nations University during an incident on June 11, 2020. More than half an hour of footage from the incident was provided to the newspaper, and it has been trimmed in two places, which are marked in the video, to leave out long portions in which no interactions or movement occurred.

• June 17, 2020: Lawrence Police Department has updated policies on use of force, comparisons to ‘8 Can’t Wait’

• June 15, 2020: A rundown of how Lawrence police can and cannot use their body cameras and how the public can record police interactions

• June 10, 2020: Lawrence Police Department finally releases report on use of force in 2019; 17 instances cited; officers’ actions found justified in all