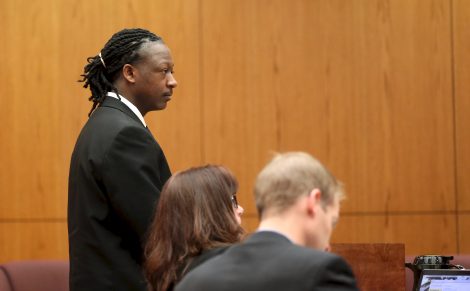 From left, Rontarus Washington Jr. stands next to his defense attorneys, Angela Keck and Adam Hall, in this file photo from his trial on Sept. 24, 2019 in Douglas County District Court.

A long-pending Lawrence murder case will remain in that state a bit longer as a judge on Monday agreed to order further forensic testing that could be pivotal for the case.

Rontarus Washington Jr., 23, has been in custody since January 2015. He is charged with first-degree murder and aggravated burglary in connection with the Nov. 7, 2014, death of 19-year-old Justina Altamirano Mosso.

A trial in the Douglas County District Court case has been delayed several times for a number of reasons, including the availability or pursuit of new evidence. The first monthlong trial began Sept. 9, 2019, but it ended in a hung jury. A second trial was scheduled to begin this month, but that will now be delayed pending the results of further tests.

Washington was a neighbor of Altamirano Mosso’s on the third floor of Lawrence’s Cedarwood Apartments, 1727 W. 24th St., at the time of her death from being bludgeoned and stabbed.

Currently available DNA evidence in the case does not conclusively or exclusively point to Washington, but the prosecution and the defense have both incorporated the forensic findings into their theories of the murder.

Lance Antle, a forensic biologist with the Kansas Bureau of Investigation, tested a fingernail clipping taken from Altamirano Mosso’s hand, he testified during the first trial. He did not find any complete DNA from any males, so he tried a second test that found partial DNA from at least three males.

Antle testified that his second test looked only at the Y chromosome of the DNA present. That would look only at male sources of the DNA and produce a DNA “haplotype.” Men pass the Y chromosome down to their male offspring, so related males within the same lineage would have the same haplotype.

One of the partial haplotypes from Altamirano Mosso’s nail could not rule out Washington, nor any of his male paternal relatives, Antle testified. The probability of selecting an unrelated male from the general population who would produce the same partial haplotype would be about 1 in 2,000.

That evidence was one of the strongest forensic links that Chief Assistant District Attorney CJ Rieg highlighted for the jury during her opening and closing arguments. However, the theory of Washington’s appointed defense attorneys, Adam Hall and Angela Keck, was that the partial haplotype was transferred from touching shared surfaces in the apartment building, such as stair rails and doorknobs.

Last month, the defense team filed a motion requesting further testing of Altamirano Mosso’s fingernail clippings, which the coroner cut at the scene of the murder, and the scrapings from underneath her clipped nails, collected during her autopsy. The scrapings were never tested, and Antle had testified that he put a full nail clipping in a test tube rather than swab the top or bottom, so the location of the found partial haplotype could not be known.

During Monday’s hearing, Hall said that the existing evidence does not discriminate between Rieg’s theory — that Altamirano Mosso had scratched Washington in an attempt to defend herself — and the defense’s touch DNA theory.

The defense team believes that further testing, specifically of swabs from the undersides of the fingernail clippings and of the scrapings from underneath the nail nubs, could provide more discriminatory evidence, he said.

Rieg did not object to the additional testing, but she did question the timing of the motion — why make this request now, rather than shortly after the first trial ended in October, or at any other time in the past five years? She pointed out that the defense had previously requested further DNA testing on other items found at the murder scene.

Hall said the new motion was the result of consulting with Washington and a hired DNA expert, and it was not intended to further delay the trial. Washington was willing to again waive his right to a speedy trial in order to have the testing completed.

Chief Judge James McCabria said that there might be circumstances in which refining the evidence was not warranted, but he said it did seem to him that testing the entire fingernail clipping created ambiguity, as opposed to testing from a location on that clipping. He said based on the circumstantial nature of the evidence, the weight that the state is attributing to the KBI lab results and the fact that the first trial had already ended in a hung jury, he was inclined to order the additional testing.

As the evidence has mounted over the years, it’s become increasingly complicated to schedule what was expected to be a three-week trial in September but ended up lasting four weeks. The case also includes several Spanish-speaking witnesses, so interpreters have been needed to translate much of the testimony. Seating a jury that could be present for the duration of the trial also posed a challenge.

McCabria said the court clerk’s office has done a lot of work to prepare for the second jury trial, and he hated for that to be for naught.

“But I don’t know what else to do,” he said. “I don’t think there’s any question in my mind that (the testing) should be ordered.”

As the court is now planning to set aside four weeks for the second trial, it could be late into the summer before the trial can be reset. It was also unclear from Monday’s hearing when the KBI might be able to complete the new testing.

The next hearing in Washington’s case is set for Feb. 24, which was to be the day his second trial would start. He has been in the custody of the Douglas County Jail on $750,000 cash or surety bond since he was extradited from Greenville, Miss., and booked on March 16, 2015.