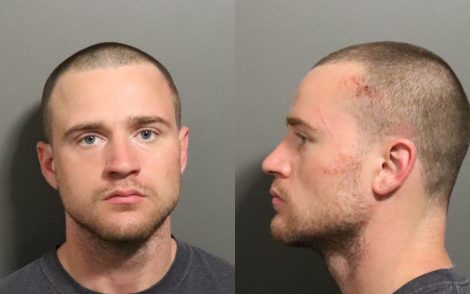 The Lawrence Police Department has begun an in-depth review after a witness to a foot chase Tuesday morning made accusations of brutality on social media.

Just before 10:30 a.m. Tuesday, department spokesman Patrick Compton said via email, officers responded to a report of a theft of alcoholic beverages in the 1800 block of Massachusetts Street.

Scanner traffic indicated that the alleged theft occurred at On the Rocks.

“Officers encountered a male individual who fit the description of the alleged suspect who then put down the stolen property and began to throw full containers in the direction of police, one of which struck a patrol car coming very near to one of the responding officers,” Compton wrote. Scanner traffic indicated those containers were full beer cans.

Compton said the man refused police commands, became verbally abusive and attempted to flee. Officers caught him at the intersection of 14th and Rhode Island streets, where he “immediately began to resist officers who were finally able to restrain him,” Compton wrote.

That’s approximately the location where a witness said on social media that he saw police officers chasing the man, then hitting him in the face while he was handcuffed.

“Full swings right to the grill, couldn’t get my camera out in time,” John Gallup wrote in a popular Lawrence Facebook group.

Compton said the department has not received any formal complaint but was aware of the post. He said the department has “reviewed the available audio and video at the supervisory level.” He said the initial review did not support the claim in the post but rather indicated that the “use of force to (effect) the arrest of a subject who was attacking the officer was appropriate.”

The Douglas County Jail booking log indicates the suspect was Brandon Michael Frye, 26. He was arrested on suspicion of battery on a law enforcement officer, aggravated assault of an officer, interference with law enforcement, theft of property or services and criminal damage to property.

Frye was being held without bond at the Douglas County Jail as of Wednesday morning. Court records indicate he also faces probation violations in previous cases.

The Journal-World previously reported about an attempted robbery that occurred Dec. 26, 2018, at Kansas Crown Discount Liquor, 1215 W. Sixth St. In that case, the suspect reportedly threatened to rob the business if not given free alcohol, but employees were able to restrain him until police arrived, LPD said at the time.

That suspect was Frye. Online court records show he was charged Dec. 28, 2018, and later convicted on a plea deal.

In a second case, Frye was charged with two counts of battery against a law enforcement officer and one count of obstruction, all misdemeanors, in connection with an incident that occurred on Aug. 29.

According to the affidavit supporting Frye’s arrest in that case, LPD officers were dispatched to the Lawrence Public Library when a caller reported that a man was refusing to leave. The first responding officer wrote in the affidavit that she saw Frye walking nearby, walked after him and tried to explain why she was there, but he kept interrupting her, saying “What are you going to do?” Frye reportedly threw a lighter at that officer, grabbed at another and elbowed a third in the chest.

Frye again agreed to a plea deal in that case and was sentenced Oct. 25, though it was not immediately clear from available online court records what his sentence was.

Frye has previously appeared on the booking log with a Shawnee address. In his most recent arrest, he was listed as transient.