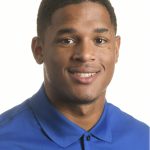 A woman told police that a former University of Kansas football player got mad when he lost a video game and then attacked her — “strangling” her then pointing a loaded shotgun in her face — according to an affidavit.

The incident occurred and 19-year-old Kenny E. Bastida was arrested in the early morning hours of May 15 at Stouffer Place Apartments, 1835 Ousdahl Road, one of KU’s on-campus housing facilities designated for student athletes. KU police said previously that the victim wasn’t a KU student.

According to an arrest affidavit prepared by KU police, which the Journal-World requested and received from the court Monday:

The victim told police that she and a female friend were invited to the apartment by Bastida’s roommate and that the group was playing video games.

Bastida got angry when he lost at the game, then attacked the woman, she told police. She said he “threw her into a dresser causing her head to strike the dresser,” then “started strangling her” with both hands around her neck while kneeling on top of her, making it hard for her to breathe, the affidavit says. He also threw her things into the hallway.

Bastida then went into his bedroom and came back with a shotgun, the woman told police.

He put a bullet in the gun, “cocked it, and put it in her face,” she told police.

She told police she was scared because she didn’t know “if he was stupid enough to shoot somebody.”

The woman said she pushed the gun out of her face and left with her friend.

Police wrote in the affidavit that they saw bruising and swelling on the woman’s neck, bruising on her legs and scratches on her arms.

After obtaining a search warrant, police found a shotgun in a red Adidas bag under the bed of an unoccupied room in the apartment, according to the affidavit. They also found a shotgun shell and drug paraphernalia with marijuana in it in Bastida’s room.

While legal concealed carry of handguns is allowed on the KU campus, university policy bans all long guns everywhere on campus.

Bastida asked for a lawyer and didn’t talk to police before he was arrested, according to the affidavit.

Bastida’s attorney, Michael Clarke, declined to comment on the allegations for this story.

Bastida, a linebacker from Pompano Beach, Fla., was on the KU football team in fall 2018 and throughout this spring but was no longer on the roster when he was arrested.

He has not been part of the football program since the month before the incident, according to KU Athletics officials, who didn’t give a reason for his departure.

Bastida played — sparingly, and mostly on special teams — in just four games in 2018 and ended up taking a redshirt season his freshman year.

Bastida has been released on $10,000 bond with orders to possess no guns. He has a preliminary hearing in the case scheduled for July 30.

The victim told police that Bastida’s roommate, Jalan Robinson, was attempting to deescalate the situation, though the affidavit says Robinson refused to talk to police about the incident himself. A Free State High School grad, Robinson is a redshirt freshman on the KU football team who did not play during the 2018 season, according to the 2019 KU football roster online.