Dollar-figures, agricultural damage not yet totaled 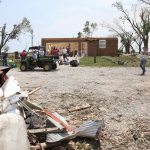 Relatives and friends of Cherry McCabria, 88, work on Friday, May 31, 2019, to clean up the property after a tornado destroyed McCabria's home of more than 40 years at 1455 East 1900 Road, northwest of Eudora. McCabria, who went to the basement before the twister hit, wasn't injured.

Douglas County officials say they’ve now confirmed the recent tornado destroyed over a dozen homes and affected over 80 more in the county.

The May 28 tornado touched down south of Lawrence and mowed through properties to the county line. It continued northeastward into Leavenworth County, where it finally lifted after being on the ground a total of nearly 32 miles and reaching EF-4 strength, according to the National Weather Service.

In Douglas County, the tornado destroyed 13 homes; caused major damage to 29; caused minor damage to 42; and affected 11 more, according to Joe Hoelscher, interim director of Douglas County Emergency Management. In addition, two commercial businesses were damaged along with one home office.

Those numbers are subject to change as more data continues to be analyzed, Hoelscher said.

Other county officials say they are still working to tally the financial costs of losses as well as agricultural damage in the storm’s wake.

County Extension Director Marlin Bates said his office was charged this week with identifying agricultural damages such as crop losses and livestock deaths.

“We are forming a team to make those assessments,” Bates said.

Bates said the overarching goal of the extension office, working under the county’s long-term tornado recovery committee, is to understand what kind of help the county’s agricultural producers will need going forward. 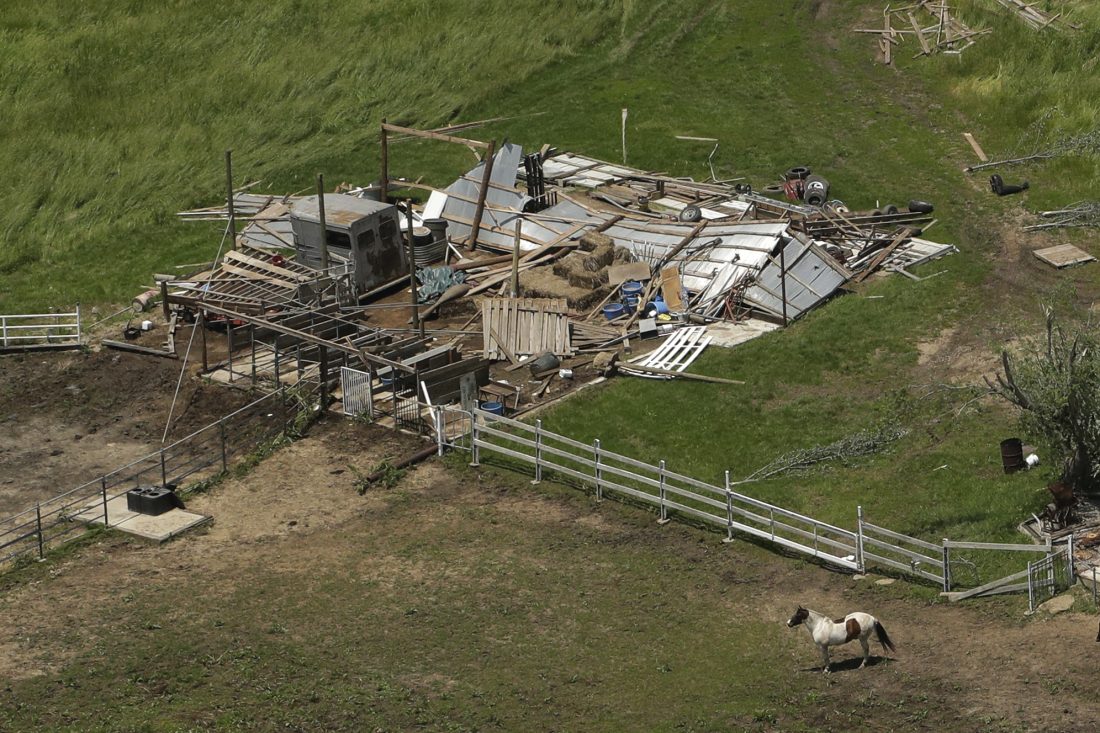 A horse stands in a pasture outside a destroyed barn Thursday, May 30, 2019 after an EF-4 tornado tore through the countryside near Lawrence, Kan. Tuesday, May 28. (AP Photo/Charlie Riedel)

The tornado injured a total of 17 people in the county, most of them in vehicles on the road when the storm hit, according to a count that first-responders released the next day.

Reportedly, 12 of those injuries were to tornado sightseers in two vans operated by Silver Lining Tours.

The storm-chasing company, in a Facebook post the next morning, called the situation “a very unfortunate incident” and explained the vans were toppled not by the main twister but by an unpredictable “small tornado” a distance away.

“While chasing the Lawrence, KS tornadic supercell, we were hit with a rain wrapped satellite tornado 2 miles southeast of the parent circulation,” it said. “Two vans were rolled resulting in a few minor injuries…Two of our vans were not (affected).”

In addition to the overturned vans in the 500 block of East 550 Road, the Douglas County Sheriff’s Office handled one other vehicle blown off the road, on Kansas Highway 10, public information officer Jenn Hethcoat said. She said all 12 injured people from the vans and the single person injured on K-10 were all taken to hospitals.

In the K-10 incident, Ottawa resident Terry Seymour told the Journal-World he’d gotten out of his Jeep to take cover when the tornado lifted the vehicle and rolled it over on him, breaking his leg.

To volunteer with tornado cleanup: Go to the county’s Volunteer Reception Center, open 8 a.m. to 7 p.m. daily through Sunday at First Church of the Nazarene, 1470 North 1000 Road. Organizers request that volunteers check in before 5 p.m. each day.

To get help: Call the county at 2-1-1, or find tornado recovery information online at douglascountyks.org.