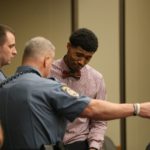 Albert N. Wilson, 23, is taken into custody by deputies after a jury found him guilty of rape on Thursday, Jan. 10, 2019, in Douglas County District Court.

The sentencing date has been pushed back for a man recently convicted of raping a teenager he met at a college bar.

Albert N. Wilson, 23, of Wichita, appeared in Douglas County District Court Wednesday, but his sentencing was rescheduled for April 3.

A pre-sentencing investigation, which details a defendant’s criminal history if any, was not yet completed, attorneys said.

Wilson’s appointed attorney, Forrest Lowry, requested a new trial, but Judge Sally Pokorny denied it. In her explanation, Pokorny said the request was based on “jury regret,” which is not a valid reason to order a new trial.

Prior to Wednesday’s hearing the Journal-World requested a copy of Lowry’s motion for a new trial and prosecutors’ response to it, but those motions were sealed, according to the Douglas County District Court Clerk’s Office. Neither Lowry nor prosecutor Amy McGowan elaborated on their written arguments in court, other than McGowan briefly referencing an email from a juror or jurors.

On Jan. 10, a jury convicted Wilson of one count of rape by force or fear. The rape and the encounter that led up to it happened on a Saturday night in September 2016.

Wilson and the then-17-year-old victim met inside the Jayhawk Cafe, known as the Hawk, just off the University of Kansas campus at 1340 Ohio St. Both were underage — Wilson used a friend’s ID to get in, and the girl wasn’t carded at all.

Wilson was a KU student at the time. The girl was a high school student from the Kansas City area, visiting her cousin at KU.

The two met in the line to get in the Boom Boom Room — the dark, crowded dance floor in the basement of the Hawk.

The victim testified at trial that she’d been drinking beforehand and that Wilson first lifted her skirt and assaulted her on the dance floor. She said he then led her, stumbling, out of the bar and to his home a couple of blocks away.

There, she repeatedly told him, “No, I’m too drunk, I can’t do this,” but Wilson held her down and raped her, she said. She then returned to the bar and reconnected with her cousin, and went to a hospital for a sexual assault examination the following day.