Defendant at trial: ‘She didn’t seem intoxicated at all … I didn’t rape her’ 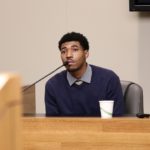 Albert N. Wilson takes the stand at his own trial on Wednesday, Jan. 9, 2019, in Douglas County District Court. Wilson denied accusations that he raped a 17-year-old girl he met at a Lawrence college bar in September 2016.

Jurors at a Lawrence rape trial initially heard a young woman tearfully testify that she was 17, dizzy-drunk at a college bar, assaulted on the dance floor and then led away and raped by a man she’d just met.

Jurors heard a very different account from that man.

Albert N. Wilson, 23, of Lawrence, took the stand at his own trial on Wednesday and described the Saturday night in September 2016 when he met the alleged victim at the Jayhawk Cafe, better known as the Hawk, just off the University of Kansas campus at 1340 Ohio St. He’s charged with two counts of rape, for alleged contact in the bar and then at his home nearby.

“She didn’t seem intoxicated at all,” Wilson said. He also said the pair’s contact inside the bar was mutual and that they never had intercourse, as the girl testified.

Wilson was the final witness in the trial, in which the girl’s level of intoxication and disputed consent are key factors. Attorneys are to give closing arguments Thursday morning before turning the case over to the jury. Wilson is free on bond.

Wilson testified that he now lives in Wichita but was a full-time KU student at the time, after getting his associate’s degree at a community college. That night, he and a friend met the girl and her cousin in line to get into the Boom Boom Room — the dark, crowded dance floor in the basement of the Hawk.

He didn’t know she was 17, and she seemed like any other college student, he said. She was staring at him, they talked, and then she started touching him, he said.

Surveillance footage from the bar, shown in court Wednesday, shows her pulling him by the hand into the Boom Boom Room.

In the dark room, Wilson said his back was against the wall and they both started touching each other. He denied placing the girl’s hand inside his pants, as she testified, and said she placed her own hand on him. He said he did touch the girl under her skirt but that it was consensual and she never rebuffed him.

When he told her he was going home and that she could come if she wanted, she said, “OK,” Wilson testified.

He denied the girl’s previous testimony that she resisted or said anything about needing to find her cousin, whom she’d lost in the crowd.

Surveillance footage from the bar shows Wilson pulling the girl by the hand back through the crowded bar and outside. Other cameras show the pair walking hand in hand around the corner and down the 14th Street hill toward Wilson’s house, two blocks away at 1340 Kentucky St.

While the girl previously testified that she drunkenly stumbled, Wilson said she stumbled on a sidewalk crack on the steep hill. When he asked if she was OK, he said that she jumped on him, wrapping her arms and legs around him and continuing to kiss him.

Wilson responded to a series of questions about their interactions from his appointed attorney, Forrest Lowry.

“Did she ever do anything or say anything to make you think she didn’t want to have sex with you?”

“If she had said no, what would you have done?”

“I would have took her back to the bar.”

Videos show the two returning to the bar — this time not hand-in-hand — about 15 to 20 minutes after they left.

Wilson estimated they were only actually inside his room for about 5 minutes. He said the girl came upstairs with him, lay on the bed and they continued to make out. He said he never removed her clothes and that he did not have sex with her.

Wilson said he got a “where you at” text and a missed call from his friend at the bar and decided to go see what he needed. When he told the girl he was leaving, she gave him a “mad look,” and they both walked back toward the bar, Wilson said.

Prosecutor Amy McGowan attacked this in particular, asking why Wilson didn’t just ignore his buddy or text back that he was with a girl and to leave him alone.

“That’s what you want us all to believe that happened?” she said.

McGowan also reiterated that Wilson had watched the woman, with whom he had no prior history, in tears saying that he raped her. McGowan asked if Wilson thought she made that accusation because she was mad that he wouldn’t have sex with her.

“I believe so,” Wilson said.

He reiterated that the girl was not drunk, they didn’t have sex and, “I didn’t rape her.”

Kansas Bureau of Investigation scientists testified that while Wilson’s DNA was found on the girl’s chest — where he said he kissed her — no seminal fluid or DNA was found on her clothing or on a vaginal swab.

The nurse who performed a sexual assault examination on the girl at a hospital the day after the incident testified on Tuesday. Diana Layson said that in addition to collecting swabs from the girl, she took photos of bruises on her inner thigh.

Confronting Wilson in court, McGowan also pointed out that his story on the witness stand didn’t match what he previously told police. 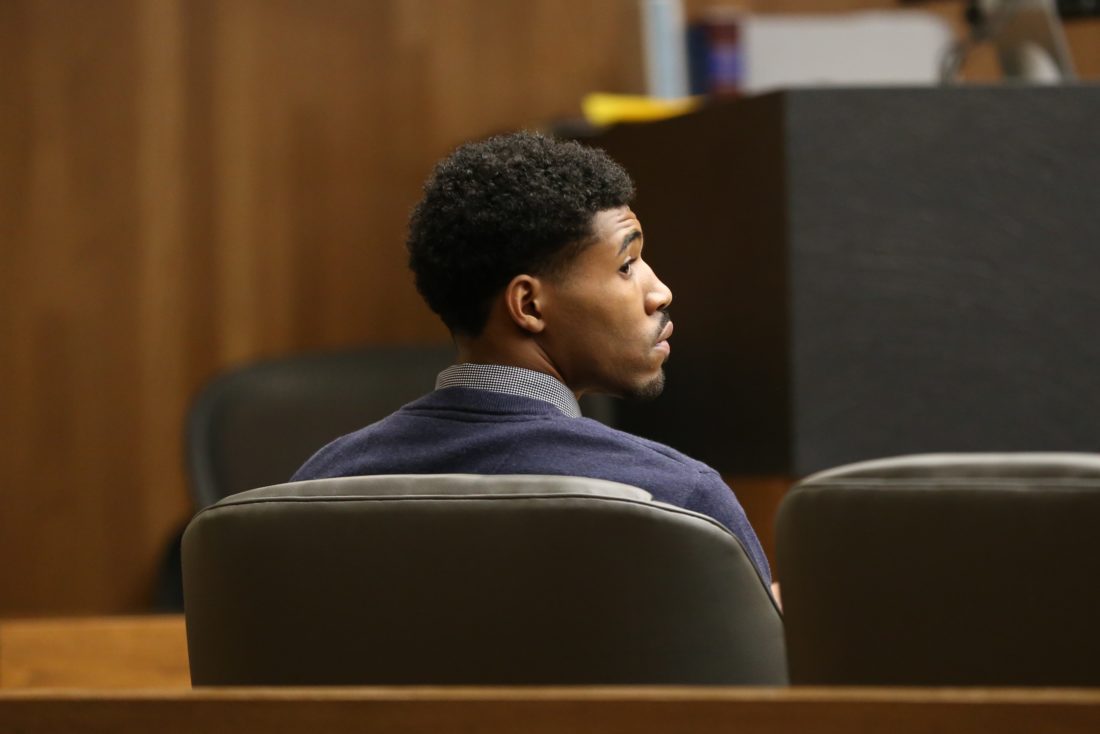 About two months after the incident, Wilson went to the police station willingly and cooperated when officers searched his apartment, but repeatedly told officers that he didn’t remember anything about that night.

“I told the police I didn’t remember because I didn’t want to say anything to incriminate myself at that time,” Wilson said in court Wednesday.

The alleged victim in the case is white. McGowan, who is also white, asked Wilson why — if he didn’t do anything wrong — he didn’t just tell the officers what he told the jurors, who all also appear to be white.

“I don’t know how to explain this, but I come from a different background than you, ma’am,” said Wilson, who is black. “… I just felt like the police was against me at that point.”

• Also on Wednesday, longtime Lawrence-based forensic psychologist John Spiridigliozzi described his evaluation of the woman, corroborating trauma she and her mother previously described to jurors.

“She said she was raped … and it destroyed her,” he said. 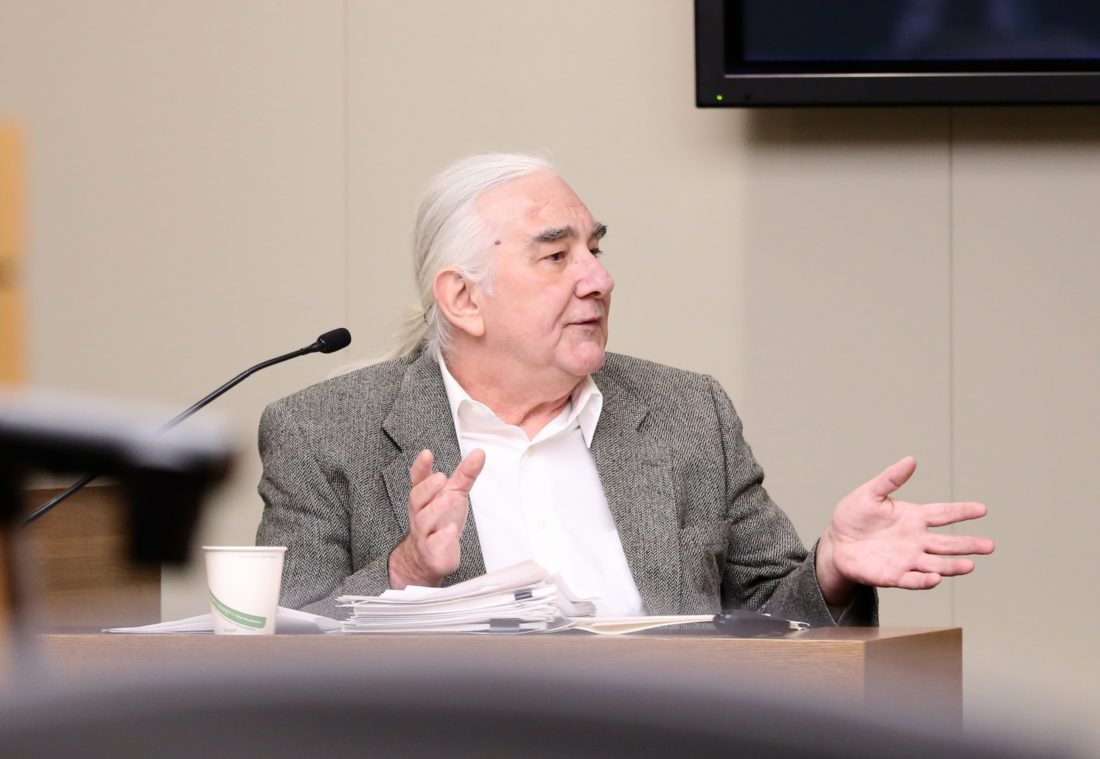 John Spiridigliozzi, a Lawrence-based forensic psychologist, testifies on behalf of the state on Wednesday, Jan. 9, 2019, during the trial of Albert N. Wilson in Douglas County District Court. Spiridigliozzi evaluated the alleged victim, who testified that Wilson raped her after they left a Lawrence college bar together in September 2016.

Spiridigliozzi, hired by the district attorney’s office, said he interviewed the woman and people she was close with in early 2018. He diagnosed her with post-traumatic stress disorder, with “very serious symptoms” persisting even at the time of his evaluation, more than a year after the incident. She maintained stellar grades in high school and when she went on to college out of state, he said, but because of unhealthily throwing herself into schoolwork to cope.

He said her mental health and family and friend relationships deteriorated. He said she had recurring nightmares, could not function in crowds at school, couldn’t sleep and had continuing panic attacks, among other problems.

• The Lawrence police officers who investigated the case shed some light on two notable delays in the process.

For one, almost a month passed before the girl reported the rape to police. Then, a full year passed before authorities filed criminal charges against the alleged assailant.

Officer Lindsay Bishop said that police were first notified of the incident by the Kansas Department for Children and Families. The nurse who examined the girl at the hospital, considered a mandated reporter, told the agency about the situation because the girl was 17 at the time, Bishop said.

Bishop said she made several attempts to contact the girl before, a few weeks after the incident, the girl’s mother called the Lawrence Police Department. She described the incident and had questions and concerns about what an investigation would look like and what it would mean for her daughter. They then scheduled the girl’s police interview in early October 2016, about a month after the event.

As for the charges, the department sent forensic samples to the KBI for testing but didn’t get them back until September of 2017, Bishop said. She said those results may have been considered prior to charging Wilson.