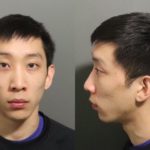 Skyler N. Yee not only stole dozens of pairs of underwear from volleyball players he coached, he organized them, court documents allege.

After linking Yee to break-ins at the homes of multiple University of Kansas women’s volleyball team members, Lawrence police searched his home earlier this month. According to a police affidavit released to the Journal-World Wednesday, here’s what detectives found in Yee’s closet:

• A roughly 40-drawer clear plastic storage container, a number of drawers labeled with names of current and former KU volleyball players and one player with the Lawrence Landsharks under-18 volleyball league. Each drawer with a name on it had underwear inside.

• An ottoman and bags containing pink high heels, boots, a sundress and a jumpsuit that the victims reported had been taken from their homes. Also recovered were more underwear, bras, Halloween costumes, jewelry and sex toys “from unidentified owners.”

Detectives said in the affidavit that they don’t think Yee stole the items for financial gain, but rather for “his own motivation.”

Yee, 23, of Lawrence, was arrested and charged with 15 counts of burglary, property damage and theft occurring from December 2017 through last month, according to the complaint filed in Douglas County District Court. Four of the counts, for burglary, are felonies.

Until resigning in mid-January, Yee had been the KU women’s volleyball volunteer assistant coach since August 2016. Before that, he was team manager for the 2013, 2014 and 2015 seasons.

While KU Athletics spokesman Jim Marchiony wouldn’t share specifics about the case, he told the Journal-World following Yee’s arrest: “We have taken precautions to ensure that he is not permitted to be anywhere near the volleyball program.”

Yee also coached for the Lawrence Landsharks league, according to the police affidavit.

Yee is free on bond, with pretrial monitoring and court orders not to contact any current or former KU or Landsharks volleyball players. His next court appearance is set for Feb. 26.

Charges against Yee allege that he broke windows to get inside and steal clothing and shoes from two homes where volleyball players lived.

According to the police affidavit:

Officers responded to the home on Fountain Drive after a late-night intrusion alarm on Dec. 31 but didn’t immediately see anything amiss. A couple of hours later, after another intrusion alarm, officers went back and found several items out of place since they’d searched the home earlier.

Those players told police that an apartment where some of their teammates used to live had also been broken into twice over the previous year — both cases that police hadn’t solved.

The apartment residents told police they’d had about 14 pairs of shoes and seven swimsuits stolen in the incidents.

The spring break burglary was actually initially reported to police at the time by Dedric Lawson, a friend of one of the victims who was apartment- and dog-sitting while the women were out of town. Lawson told police that after leaving the apartment in order one night, he returned to find a bedroom window broken, bedroom doors open, lights on and the dog loose inside. The Journal-World could not confirm Wednesday night whether the Lawson mentioned in the affidavit is the KU men’s basketball player by the same name.

Using residential surveillance video and public camera footage from an intersection near the Fountain Drive home, police identified a suspect vehicle with a dealership sticker in the window.

A local car dealership confirmed that car had been loaned to Yee while his was being serviced, and also provided information from the car’s built-in computer system showing where it had been. In addition to being at the scene of the latest reported burglaries, the car was logged at a Lawrence Walmart, where police found video footage of a person identified as Yee getting into and out of it.

Detectives also noted in the affidavit that, in addition to the stolen clothing and shoes, Yee’s room was decorated with KU volleyball posters autographed by some of the same women whose names were on the underwear drawers.